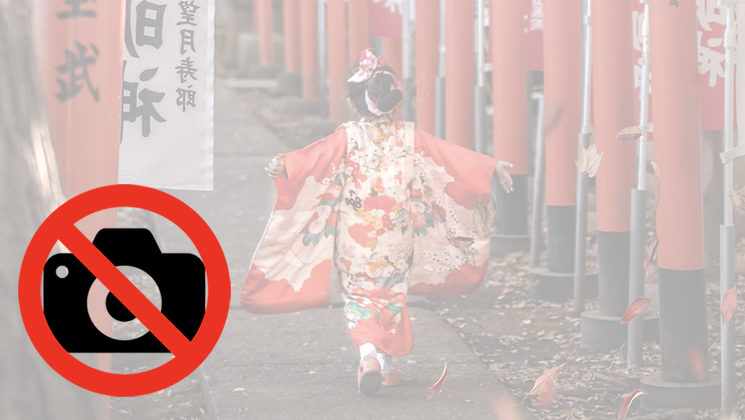 Tourism in Japan has increased dramatically over the past few years. And as we all know, not all tourists are respectful towards the places they visit. Kyoto’s historic Gion district has been struggling with bad tourist behavior. As a result, Kyoto has banned photography from all of Gion’s private streets and properties.

With its traditional stone pavements, restaurants and tea houses, the Gion district is one of the major tourist attractions in Kyoto. It’s also home to many geishas and their apprentices, maikos. According to NHK, some tourists have reportedly entered private property without permission. What’s more, some of them were taking photos of geishas and maikos without permission, and some were even reported pulling at their kimonos.

As a result of disrespectful tourist behavior, an association of residents and shop owners in the Gion district imposed the ban on photography. It’s effective in all private alleys near Hanamikoji street, and it came into effect on Friday, 25 October.

The association chief, Mimiko Takayasu, said that “the ban has been imposed to preserve Gion’s traditional atmosphere.” Those who disobey the newly established rule will have to pay a 10,000 yen fine, which is roughly $100 USD. However, as CNN notes, it’s not clear how the bans and fines will be imposed.

Back in 2017, Japan issued an etiquette guide for tourists. One would say that not doing things listed in it is common sense… But apparently, for some people, it isn’t. I guess that some tourists also don’t find it reasonable to stay out of the private property and be polite to geishas and maikos, and it resulted in the photography ban.

Kyoto’s Gion district isn’t the only neighborhood that banned photography (or at least tried to). Residents of Notting Hill are begging tourists to stop taking selfies at their doorsteps, as well as people living in Rue Crémieux in Paris. Thanks to one couple’s pretty tacky wedding photo (NSFW link), the Greek island of Rhodes even banned all foreign weddings. Finally, inappropriate behavior in sacred or historic places can even send you to jail in some countries.

In conclusion – learn about the country you’re visiting before you go there. And once you arrive, be kind, be respectful, and don’t do anything you wouldn’t like others to do to you or when they visit your neighborhood. It’s that simple. If we all just respected each other, we wouldn’t need photography bans and fines in the first place.

This photography project celebrates powerful women from our neighborhood