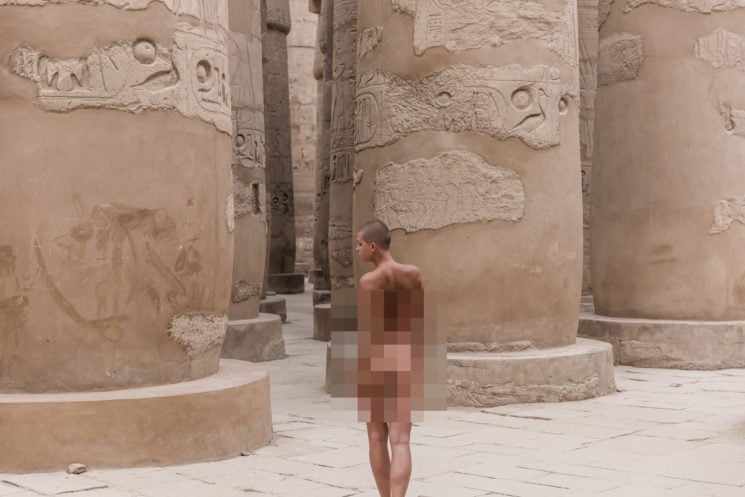 From time to time, photography could get you in trouble. For Photographer Jesse Walker and model Marisa Papen, the trouble came while they were shooting nudes in an ancient temple in Luxor, Egypt. They tried hiding from the guards to take the shots, but they got busted. As a result, they faced extremely unpleasant situations and spent a night in a jail cell.

The Australian photographer shot the photos for Enki Eyewear back in April this year. But a couple of days ago, the backstory was published on the Belgian model’s blog. As it turns out, this wasn’t the first time they got busted. It also happened in other locations around Egypt, but they were able to talk their way out of the situation or bribe the guards.

They spent the night in a police station that doubled as a jail cell. When they appeared in the court, they played “the role of stupid tourists” who didn’t know dancing nude on Egyptian ground was forbidden. Eventually, they only got a warning from the judge never to do it again. As soon as they got to the hotel room, Walker retrieved the deleted images and they are now published.

Nudity is beautiful and I have nothing against it, but it doesn’t mean you can strip your clothes anywhere. Whenever you travel abroad, I assume you respect the culture of the country you’re visiting. It takes only a little research to find out what’s allowed and what isn’t, and it doesn’t look like the photographer and the model did this research. Or they just didn’t care about the customs and laws, which is a more likely scenario. In my opinion, Walker and Papen acted disrespectfully to the Egyptian culture and probably even their laws. They broke the rules multiple times, so they should be happy they got off with just with a night in a cell and a warning.

I believe this case brings out some questions about respecting other’s culture, rules, and laws as photographers. Art is supposed to push the boundaries, that’s true. But in my opinion, this isn’t the way to do it. Other than obeying the law, I think we should respect other people and their culture when we travel and take photos. I follow the logic “When in Rome…” and try to comply with the rules of the country I visit, both from the respect, but also for my own safety.

I’m curious to hear your thoughts on this matter. Were they “pushing the boundaries,” or it’s just plain disrespect? What would you do?

« Phase One takes on the human eye with new $45,000 IQ3 100MP Trichromatic digital back
Why the iPhone shoots 4K 60fps but your camera doesn’t »