Photoshop has become so intertwined with many of our lives as photographers that it’s difficult to imagine life without it. For those younger photographers, there was never a time when it didn’t exist. But Photoshop today celebrates its 30th birthday from that initial Version 1 release.

So, we thought now would be a good time to remember how it looked back then. Initially priced at $895, it looks extremely primitive by today’s standards and it’s come a very long way since then. Although, that tools palette still looks awfully familiar.

Photoshop’s first use was to create visual effects for James Cameron’s movie, The Abyss, Adobe writes in a blog post celebrating Photoshop’s 30th anniversary. And that was a beta before Photoshop 1.0 had even been released (you can see a video of an early beta version here). Since then, we’ve seen countless innovations and additions added to Photoshop, including basic things we take for granted today, like layers. Yes, there was a time when even Photoshop didn’t have layers. Non-destructive editing hasn’t always been a thing! 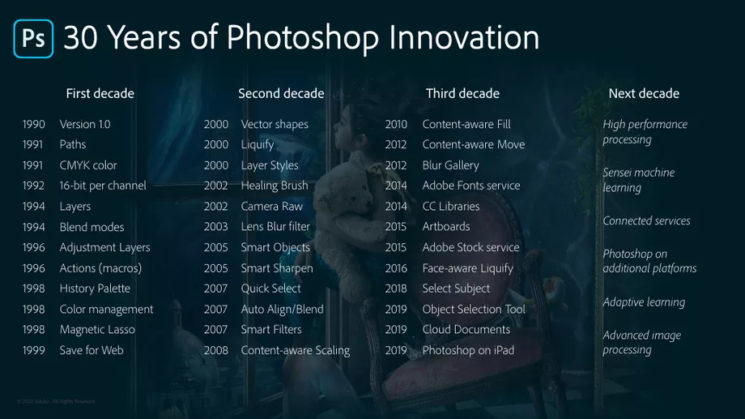 Photoshop very quickly established itself as a solid tool, becoming a world leader in its field, a title it still holds to this day. There’s some competition out there now, although Photoshop reigns supreme as the most popular. So popular, in fact, that it’s even become a verb.

Now, Photoshop has even expanded out of the desktop and onto the portable tablets we can take with us anywhere, as this recently released video of Photoshop on the iPad demonstrates.

Adobe isn’t resting, though. They still have big plans for the future of Photoshop, with expansion to more platforms and a whole bunch of new features – including a bunch that they’ve released today, including improvements to the content-aware fill workspace, better lens blur, “Dark UI” support on macOS and a bunch of performance boosts. You can read more about the new updates over on the Adobe Blog.

I wonder what the next 30 years will bring.

What’s been your favourite feature of Photoshop over the last 30 years? What feature could you not live without?

« Cosina has officially announced the Voigtlander NOKTON 60mm f/0.95 lens for Micro Four Thirds
The milky way, a medium format camera and a f/4 lens – this is how it went »