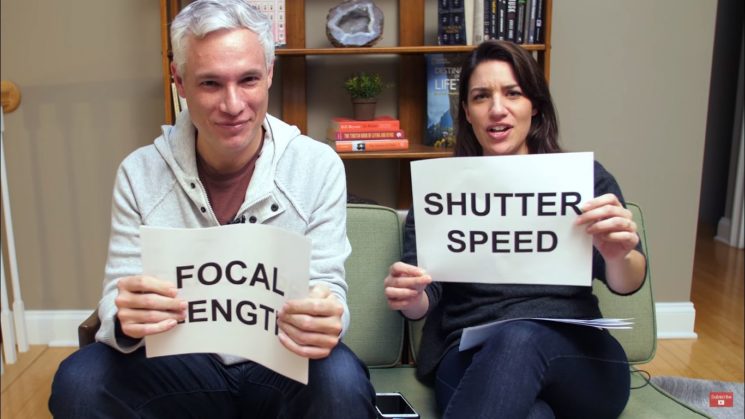 Like all industries, photography has its jargon, and most photographers don’t even think about the words they use on a daily basis. Photographers Tony and Chelsea Northrup discuss some of the most common photography-related terms and suggest that they are “stupid.” They suggest replacement terms which would sound more logical. When you think about it, some terms we use every day indeed sound illogical. But, would you change them?

Stops: it’s a term originating from 1858 and Tony suggests it’s dated. Since it denotes doubling the exposure, it doesn’t make too much sense, according to the couple.

Fast: fast lenses let in more light, and fast films are more sensitive to light. But if the shutter speed is fast, it will let less light pass through to the sensor. The Northrups suggest we call lenses “bright” instead.

As a non-native English speaker, I found it strange that a lens with a wide aperture is called “fast” when I first encountered with the term. It’s interesting to see that native speakers can find it illogical, too.

Shutter speed: since it’s not the speed of the shutter, Chelsea suggests it should be called “exposure time” all the time, not just for long exposures.

ISO: it should be short for International Organization of Standardization. So, shouldn’t it be IOS? Chelsea believes it should.

Focal length: according to Tony, using the focal length in millimeters to describe the angle of view is illogical and confusing.

F-stop: when I first started learning photography, I found this a bit confusing. You increase the f-number to make the aperture smaller: it does sound a bit strange when you’re just starting out. But it takes, like, five minutes to get used to it.

Exposure triangle: according to the Northrups, the exposure triangle is “completely meaningless” and doesn’t make much sense as it doesn’t include the light which you can add and control. Although, I don’t think he’s serious about it.

Depth-of-field: according to Chelsea, depth-of-field would make more sense if it was named “depth-of-sharpness.”

I found this video amusing, and it made me remember my first steps in learning photography. It looks like it was the point of the video. Indeed, some of the photography terms don’t make much sense when you first hear of them. But of course, they become a part of your knowledge and vocabulary over time.

The question is, should we try and invent more logical terms for us and future generations of photographers? Personally, I don’t think so. As I mentioned at the beginning, every industry has its jargon, and so does photography. As you learn what these terms mean, you’ll find them logical even if they didn’t seem it at first.

On the other hand, every language evolves and changes. I assume that some photography-related terms could change over time. But, I don’t think it will happen soon, and we certainly can’t force it.

What do you guys think? Should the photography terms mentioned in this video change to be more logical? Are there any photography-related terms you wish were different?