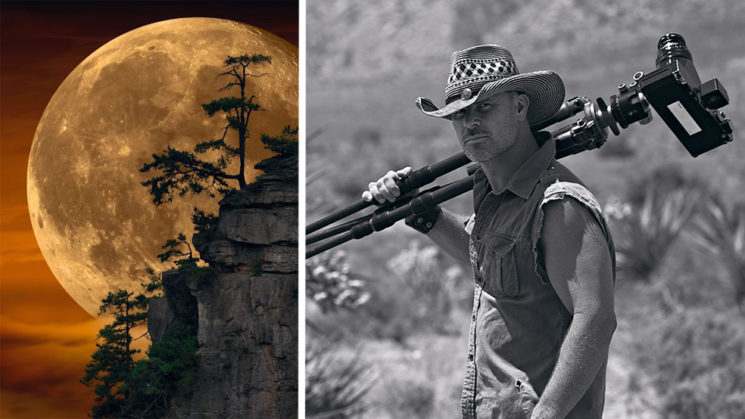 Peter Lik is one of the bestselling and the most successful landscape photographers in the world. But one of his recent photos has sparked a serious discussion about how much it was photoshopped. In their recent video and article, the guys from FStoppers wonder if photo titled Moonlit Dreams can possibly be real. From their debate, it appears that the Moon was photoshopped from a different image.

FStoppers posted the video and the accompanying article debating whether or not Moonlit Dreams is real. As they write, all this matters because Peter Lik’s team reportedly swears that his images are “real.” So, the guys from FStoppers decided to figure out whether or not this is true.

They explore several elements of the shot. The first problematic element is the lighting and its direction on different elements of the image. The shadow on the upper right side of the moon also looks off. Then, they wonder if it is possible to achieve a shot this perfectly sharp at a single shot, or even with focus stacking. The position of the clouds looks unnatural too, and it’s fishy that there’s no any atmosphere distorting the shot.

In addition to analyzing the elements of this image, Steve Cullen of FStoppers compares the moon from Moonlit Dreams to the one in Bella Luna. They seem identical. Cullen explains that it would be “extremely unlikely to capture the exact same face of the moon in two separate shots at different times and in different locations.” He explains this is because of the moon’s movements relative to the Earth.

Regardless of the heated debate, “Moonlit Dreams” seems to be selling well.

FStoppers team says they haven’t spoken to anyone from Lik’s team about this image. But, the guys assume they’d sell it as a “single, unaltered frame.” So, this makes you wonder how much Photoshop is too much. “How far is too far?”

You can compare the photos and see for yourself, and I’ll let you be the judge. You can find Moonlit Dreams on this link, and even zoom it in to do some pixel peeping.  Another photo, Bella Luna, is available here.

A look into the personal life of photography mogul Peter Lik

No women were around for this group photo of Silicon Valley execs, so they Photoshopped some in