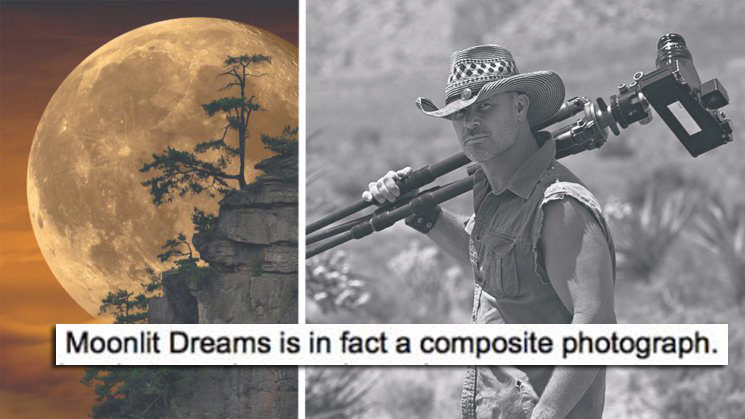 Not long ago, one of Peter Lik’s moon photos caused quite a stir. The community called him out for photoshopping the image, and Jared Polin has received the confirmation from Lik’s team. Yes, Moonlit Dreams is officially a composite.

As the debate over the photo was heating up, Jared contacted Lik’s studio for confirmation. After a while, they replied to his email confirming that the photo is, in fact, a composite. They added that they’ve been open about this topic even before the photo was released.

I think it’s great that Jared heard back from Lik’s studio and that they admitted the truth behind the photo. However, it doesn’t seem as they’ve been open about it from the start. As Jared points out, on the Moonlit Dreams website, you can’t find the information about whether it’s a composite or not.

As for Moonlit Dreams on Lik’s website, the link to the photo is now broken. When you search for it on the website, you’ll get no results. So, it appears Lik’s team has removed it from his website, although the dedicated Moonlit Dreams site is still up.

Jared points out that it probably wouldn’t affect the potential buyers if it was noted that the photo was a composite. I tend to agree: I believe most people would just buy a photo they like, no matter if it’s a composite or not. Lik’s team has confirmed it now, which is certainly a way to end this debate. Although, it probably would have spared them the stress if they did it earlier. I guess they should have noted it somewhere when the photo was published, at least in the fine print.