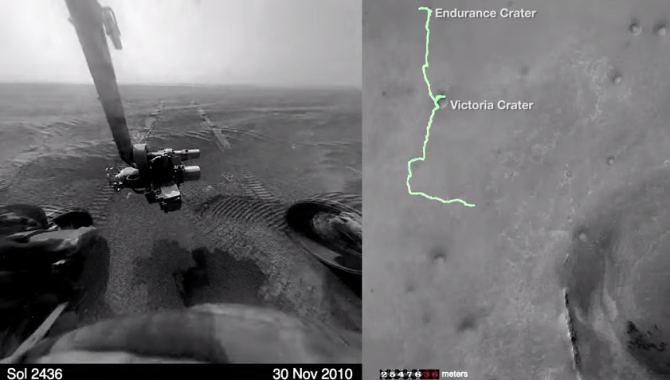 Usually we share timelapses of the most beautiful places on earth, resolution goes up to 8K, and sound design is spectacular. This next movie however, was not shot on earth, sound is crap and resolution looks like something from the 80’s.

This 8 minutes timelapse documents NASA’s Mars Exploration Rover – Opportunity traveling 42.2 kilometers (a full marathon if you will), over roughly 12 years. The Rover started it journey on January 2004 and the footage goes up to 2014 (the rover is still going though).

The photos are not coming from a high-end camera, but rather from the hazard-avoidance cameras mounted on the little vehicle and used to…. avoid obstacles while zooming through. Those are “two B&W cameras with 120 degree field of view, that provide additional data about the rover’s surroundings“.

If you were wondering why resolution is so low, here is Wikipedia’s explanation on the cameras:

Hazcams are sensitive to visible light and return black and white images of resolution 1024 × 1024 pixels. These images are used by the rovers’ internal computer to autonomously navigate around hazards. Due to their positioning on both sides of the rovers, simultaneous images taken by either both front or both rear cameras can be used to produce a 3D map of the immediate surroundings. As the cameras are fixed (i.e. can not move independently of the rover), they have a wide field of view (approximately 120° both horizontally and vertically) to allow a large amount of terrain to be visible