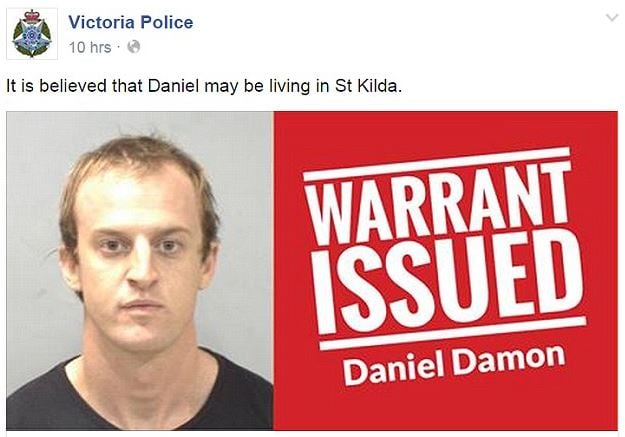 Victoria Police asked their 290,000 Facebook fans to help them locate a person named Daniel Damon, who is wanted for traffic and drug matters. The warrant was issued after Damon failed to answer bail and the police had hoped social media users would come to the rescue.

Among the many responses was one they weren’t expecting; Damon himself had responded and asked that another photo of him be used. “Can you use a better photo tho. This is a horrible mugshot”, his commented.

Proving they have a sense of humor, and perhaps hoping Damon’s running low on brain cells, Victoria Police asked him to check in for a new photo.

“Hi Daniel, please visit your nearest police station and we’ll arrange for a new photo to be taken!”, the official Victoria Police responded to the unusual request.

Damon in turn said that he plans on turning himself in, but first he needs to get a lawyer and organize his affairs. According to the Daily Mail, however, the 25-year-old probably wasn’t in a great rush as he then went on to respond to some of the people who had commented on the thread.

“I’m gonna stick my ugly, arrogant, smartass chin in the air and keep on keepin on”, Damon later wrote on his own Facebook page, and it seems that he has yet to turn himself in or be found.

For reasons unknown to us Victoria Police has removed the original post, but ten hours ago they added the following update:

“Bendigo Police would like to thank the public for their assistance in the search for Daniel Damon wanted on a warrant for traffic and drug offences. Police are following up on several lines on enquiries”.

While the latest post did not refer to the photo issue, citizens remembered the name and were interested in a follow-up.

“Is it possible to charge him for being a smartass”, one person asked, while another asked if Victoria Police will “post his new mug shot for all to see?”.

We’ll be sure to post an update once we get a hold of Damon’s new portrait.

« This Timelapse From Mars Shows Rover’s 42Km, 12 Years Journey
Cheat Sheet: 11 Filter Types, What They Do And When To Use Each One »