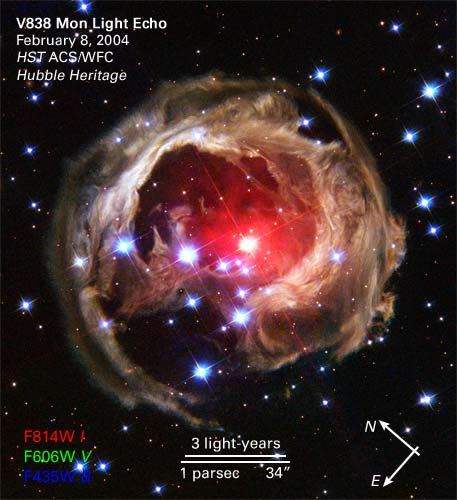 While this star exploded about 20,000 years ago (and captured on film starting  12 years ago), NASA has just released a mesmerizing time lapse showing its explosion and death and trippy music.

The star called was captured by the Hubble space telescope “erupting” about 10 years ago, emitting a flash-bulb like burst of light, illuminating the interstellar dust.

Just to get a sense of scale, the image is 13.6 light-years wide, this is not even at the scale of our solar system which is roughly 8 light-hours wide.

NASA and the Hubble team are still uncertain about the reason for the explosion.

Astronomers do not fully understand the star’s outburst. It was somewhat similar to that of a nova, a more common stellar outburst. A typical nova is a normal star that dumps hydrogen onto a compact white-dwarf companion star. The hydrogen piles up until it spontaneously explodes by nuclear fusion — like a titanic hydrogen bomb. This exposes a searing stellar core, which has a temperature of hundreds of thousands of degrees Fahrenheit.

By contrast, V838 Monocerotis did not expel its outer layers. Instead, it grew enormously in size. Its surface temperature dropped to temperatures that were not much hotter than a light bulb. This behavior of ballooning to an immense size, but not losing its outer layers, is very unusual and completely unlike an ordinary nova explosion.

The outburst may represent a transitory stage in a star’s evolution that is rarely seen. The star has some similarities to highly unstable aging stars called eruptive variables, which suddenly and unpredictably increase in brightness #

Each image in this sequence is exposed for 1.8 hours using Hubble’s ACS camera.

[Timelapse of V838 Monocerotis via time]