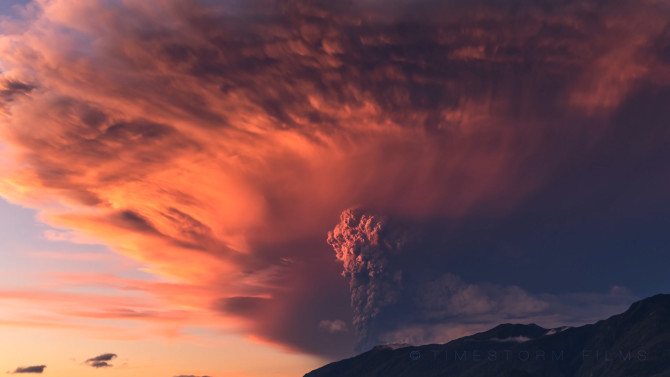 Every once in a while a volcano erupts and it is always a spectacular sight to see, but Martin Heck of Timestorm Films was able to create a video as magnificent as the eruption itself.

Volcano Calbuco, located in Southern Chile, erupted on April 22, 2015 for the first time in four decades and reminded us just how mind-blowingly gorgeous volcanoes can be.

Watch this 4K video and I bet you’ll be asking for a volcano-view room on your next vacation.

Martin and his team spent a few days shooting timelapses on the Osorno volcano before jumping aboard the Patagonia-bound ferry when they quickly regretted their decision to leave:

“After 10min on the ferry we noticed a massive, almost nuclear looking cloud boiling upwards just were we left a few hours ago. Frenetically looking for a good outlook we then rushed to the only non-forested place to get a decent view of the show”.

Luckily the team was properly equipped for the mission as they were in the middle of their photography-oriented trip, but what equipment do you use when you find yourself facing such an exquisite sight? The answer is simple: everything you’ve got!

“We quickly put every bit of camera-equipment we could find on the constantly growing mushroom-cloud. We shot timelapses in 8K and 4K with a Pentax 645Z and Canon 6D. On the A7s we shot 4K video to the Shogun”, Martin wrote on Vimeo.

Having been shooting during the previous night, the team had almost filled all their memory cards so they had to backup and clear them while capturing the Calbuco’s grand performance.

“This was for sure the most incredible show I’ve ever seen”, Martin sums up the experience. “I think this is a one in a lifetime event and I am so happy that we were able to capture it in all its glory”.

Good thing Martin was a safe distance away, as we’ve seen what happened when a photographer sent his GoPro attached to a drone to record a volcano up close.