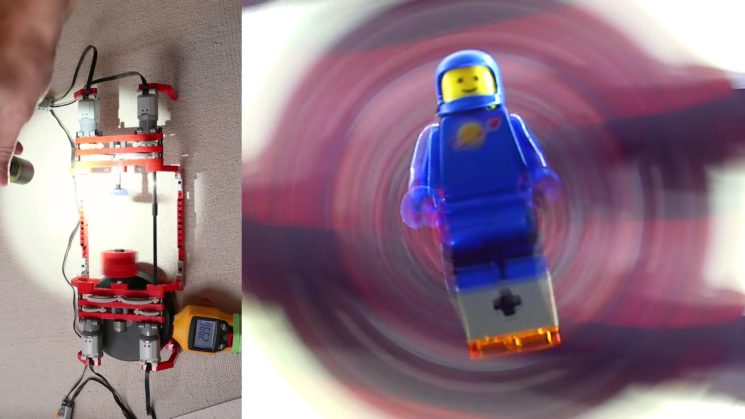 We’ve seen all kinds of Lego stuff here on DIYP: cameras and lenses, TV show recreations, quarantine projects… YouTuber Brick Experiment Channel has created a pretty wild camera rig. It spins so fast that the footage looks as if someone’s opening a portal to another dimension.

The YouTuber created this mini rig and added an action camera on one side, and a Lego man named Benny on the other. He made the rig spin and increased the speed until the figurine (or a part of it) would come off. He would then attach it with some string until it was holding up together while spinning at as much as 5370 rpm! Good job, Benny!

Once the figurine was attached firmly to the rig, the maker of this rig started adding “special effects” such as a laser, a mirror, and a flashlight. I must admit, it made the footage look like some kind of a “Legolized” sci-fi movie scene. It also reminded me of that crazy spinning GoPro footage, although I find this one a bit cooler. It’s pretty cool to watch and even kinda funny, so I suggest that you watch the whole video above and follow Brick Experiment Channel on YouTube.

How to build a massive DIY orbital spinning camera rig