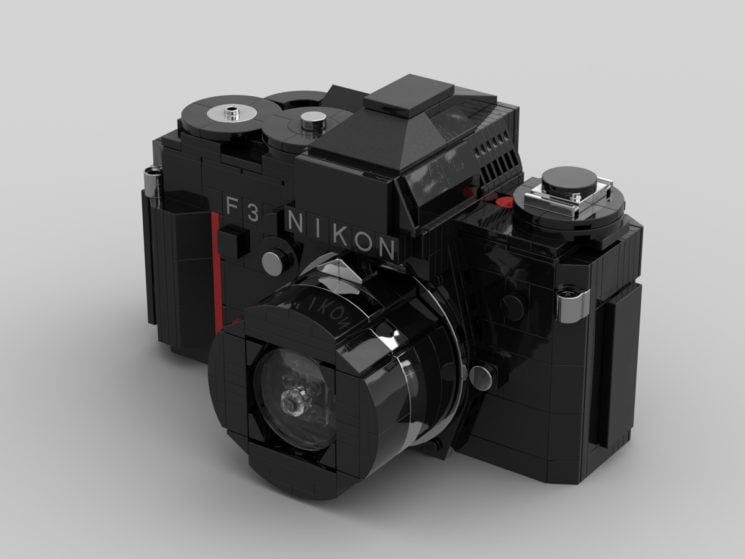 This is a LEGO model of the Nikon F3, considered by many to be the best film camera Nikon ever made. I was not very familiar with film photography until 2017, when I started a photography class at my high school. I had used digital cameras in the past but was intrigued by the process required for developing and printing images from film.

I chose to create a model of the Nikon F3 because of that recent start in analog photography and modeling a classic camera seemed like an enjoyable combination of two of my hobbies. I was also looking for a model I could post on LEGO Ideas, as my other models at the time were mostly from motion picture franchises deemed too violent by LEGO. A camera would be a fun model to create that wouldn’t make anyone upset.

I suppose I chose to model the F3 rather than another camera because in researching various pieces of gear, it often popped up as the camera with all the features I was looking for but as they were too expensive for me at the time, I decided modelling one in LEGO could be fun. Since creating this model I actually did pick up an F3. Still not wanting to spend $350-$450 on a new 35mm camera when I had a working one, I picked up a broken F3 from a local camera store with the intention of seeing if repairing it would cost less than a working one.

Lucky me: after comparing it with an F3 at my school, I realized its only issue was a missing battery cover and washer on the re-wind column, which I replaced, giving me a fully functional F3 for a total of $20. 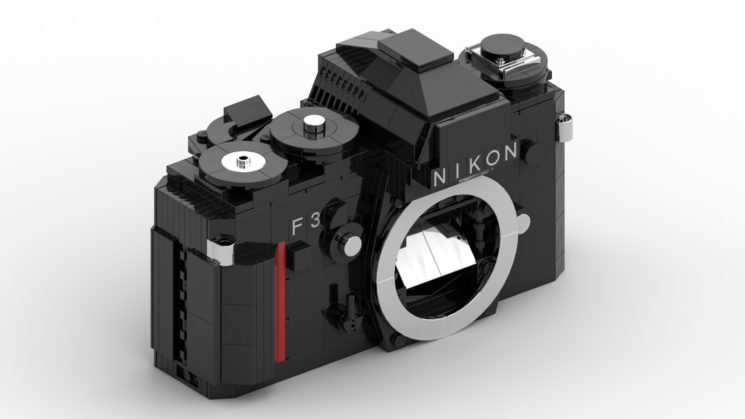 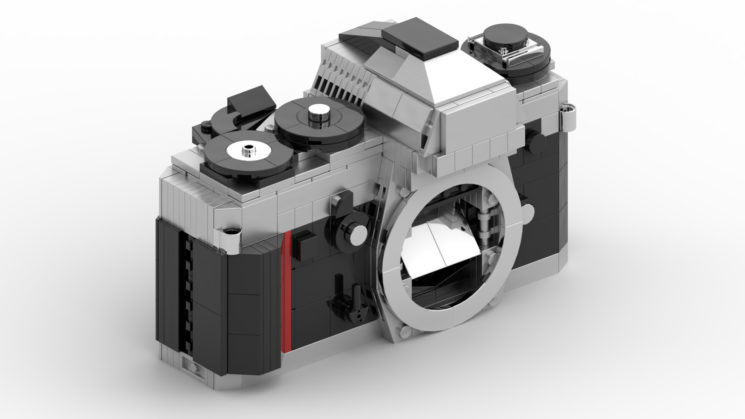 Sadly, my F3 hasn’t seen much use lately. I fell into the trap of loving big detailed prints, so over this past summer, I restored an 8×10 camera which has been my main photographic tool of late. I find large format cameras like the 8×10 the most enjoyable, for the same reason I love all film photography. Film makes me slow down when taking photos, and that is just amplified with large format, where it takes me 10-15 minutes for each exposure.

Some people have told me they find the process tedious and cumbersome compared to digital photography, however, I find film photography to be much more enjoyable than digital. I think this mainly comes from having to do all the work to develop and print images from the film myself, which usually makes the final product more satisfying (though also more disappointing when it doesn’t work out) but also from the way having only 36 exposures on a roll of film makes me think more carefully about each shot, knowing that I can’t just take 20 images in rapid succession and choose the best. 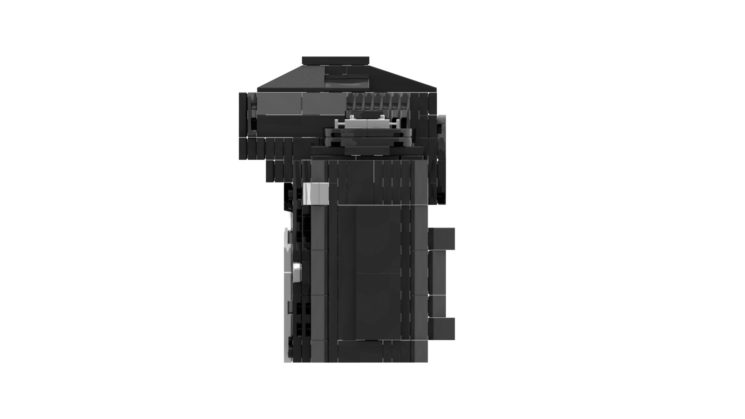 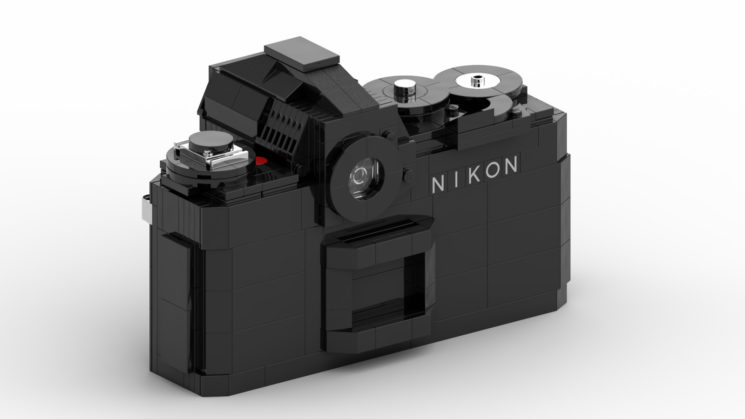 This model measures slightly larger than an actual Nikon F3, but not by much. An actual F3 measures 149 x 97 x 66mm (W x H x D), while this model measures 165 x 109 x 77mm. The model is by far one of my smaller creations, containing only 549 pieces. However, despite its small size, this model does not sacrifice detail or features.

The model has almost all the levers of the F3, only excluding the very small ones that are too small to show in LEGO. All the main dials on top are present, as is a representation of the mirror that would flip up on the actual camera when taking a photo. 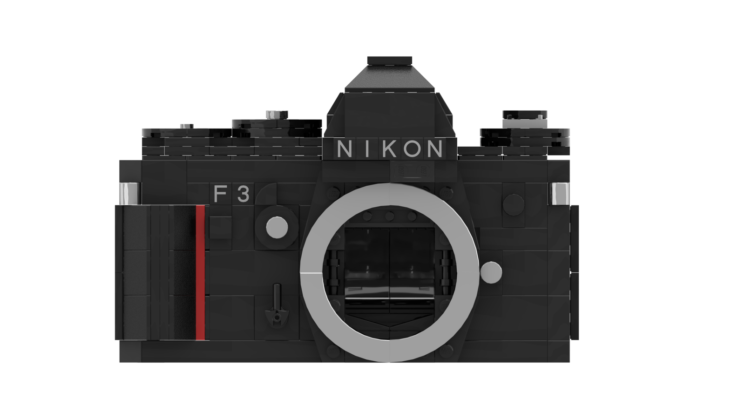 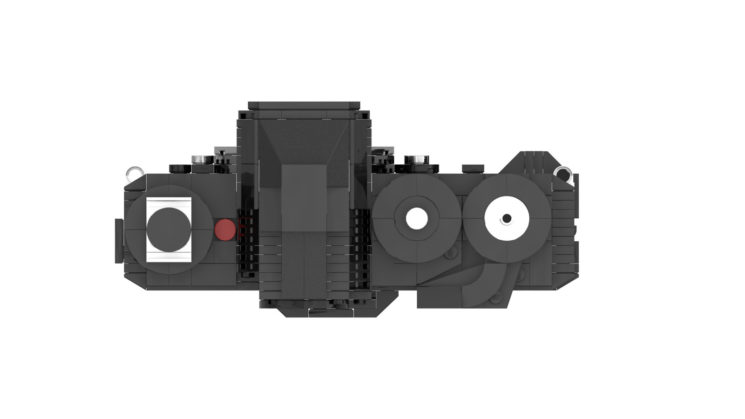 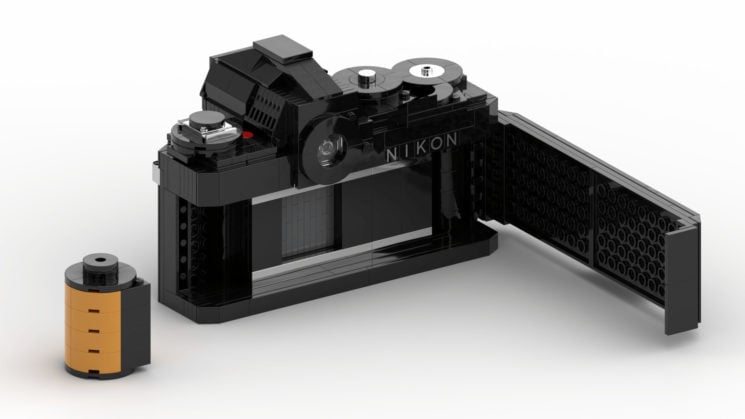 The back of the model opens and on the inside, there are representations of the shutter, film guides and film receiving spool. In the image below, I included a mock-up of a 35mm film canister, however, it won’t actually fit in the camera due to the thickness of the LEGO walls.

I initially planned on creating a lens to go with the camera body but never got to it. So when EM got in touch, I spent an hour or so today coming up with the design below, which looks somewhat like a Nikon AI-S prime lens: 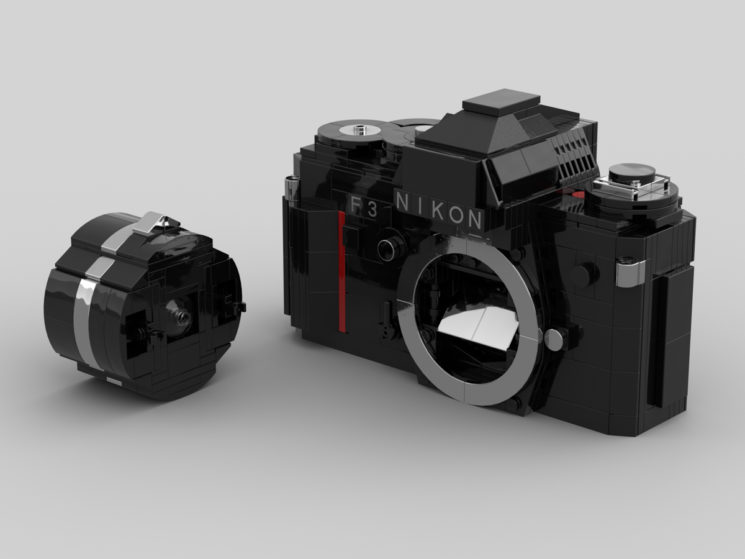 In order to make the model look closer to the actual camera, I used bricks in colors that LEGO does not currently produce so: chrome silver. If you wanted to build this you could easily replace those with flat silver or white. I’ll spend some time to create full instructions for a version using all available pieces. When completed, I’ll post that version here: https://rebrickable.com/users/EthanBrossard/mocs/

For those of you who would like to take a closer look at the model, the model files for Ldraw and Studio can be downloaded here.

Please share any feedback about the model with me in the comments below. Criticism is always welcome, but please keep it constructive! There are a little over 11 days left to support the design over at LEGO Ideas, please do check it out.

It would be awesome if LEGO picked this up as an official set through LEGO Ideas, but I don’t create LEGO models (or photographs for that matter) expecting to make a profit or anything from them. For me it’s mostly about the enjoyment I get from working on them, and if a few other people enjoy them too, that’s a bonus.

I don’t have any other LEGO cameras planned at the moment, but who knows what the future has in store? I’ve been working mostly with large format photography of late, so maybe I’ll make a LEGO Deardorff, or maybe I can figure out a way to make a large format camera body from LEGO that actually works…

Ethan Brossard is a traditional film photographer, musician, woodworker, nerd, and student. You can find more of his work on his website and follow him on Instagram. This article was also published here and shared with permission.

Artist creates this shiny “crystal cave” from 18,000 used plastic cups to show how plastic is devastating our planet
« Sony can’t keep up with the demand for smartphone camera sensors
It’s okay to lose interest in photography »