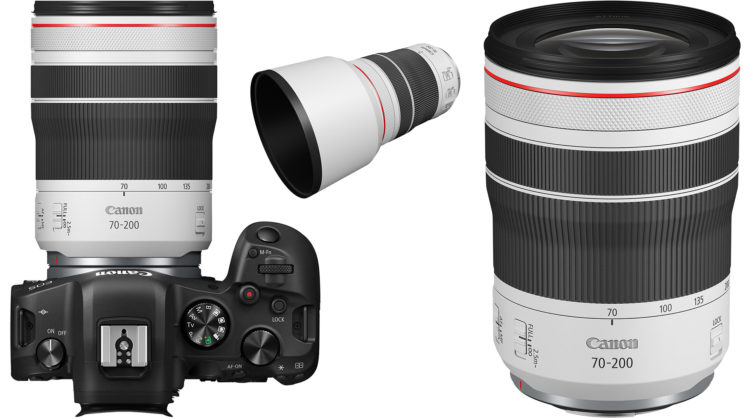 Canon really has fought back at the claim that mirrorless lenses are too big with this one. They’ve just announced their new RF 70-200mm f/4L IS USM lens and it’s ridiculously small, measuring a mere 119mm at its shortest length. It’s almost a third shorter than its EF mount equivalent, as well as being lighter. And it can be locked at its short 70mm end for travel and storage.

It’s not all rainbows and sunshine, though. Unlike its faster RF 70-200mm f/2.8L sibling, the RF 70-200mm f/4L IS USM does not have a tripod collar and it doesn’t apparently support Canon’s recently released RF teleconverters. Still, if you’re always handheld and hadn’t planned to use a TC, you’re good to go.

The minimum focus distance on the Canon RF 70-200mm f/4L IS USM is a mere 60 centimetres at all focal lengths, which is rather nice. But once you start to extend that focal length into the longer range, the lens does grow quite significantly. That’s not so much of a problem while you’re actually shooting with it, though. When you’re done, it still packs down to a stupidly small 119mm in length, which means you can actually store it vertically in your camera bag instead of having to lay it down flat like the f/2.8 (or the EF f/4).

The stabilisation in the lens offers up to 5 stops of compensation or an insane 7.5 stops when paired with a Canon mirrorless body with built-in IBIS, like the EOS R5 or EOS R6. It features an Air Sphere Coating which Canon says helps minimise ghosting and flaring while maintaining light transmission and contrast, even in strong lighting conditions.

It uses a “Dual Nano USM” motor system, which takes advantage of both USM and STM mechanisms for quick and accurate focusing that they say is super smooth and virtually silent. So, it should prove equally as useful for video as it is for stills. And, naturally, you can also switch over to manual focus, too. And it has that control ring that you can configure to various exposure settings including aperture, ISO and exposure compensation.

It will be interesting to see how this new lens stands up to the optical designs of its larger RF f/2.8 and EF f/4 siblings.