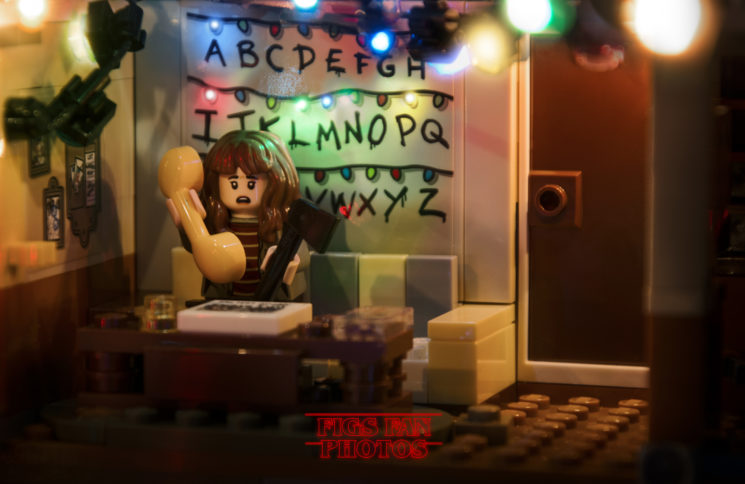 Stranger Things has won the hearts of millions of viewers across the globe. Its aesthetic, story, atmosphere, and acting didn’t just create a tense and emotional journey, but they have also been an inspiration to artists. Lampert Benedek is a Hungarian toy photographer who was inspired by the popular TV show. So, he got a LEGO kit, some props, lights, and a camera and recreated some of the most exciting and spooky scenes from the show. Most of the photos were done entirely in-camera, and Lampert shared with DIYP how he did it.

I have followed Lampert ever since we first featured his work on DIYP. As a Stranger Things fan, I was thrilled when a LEGO version of it showed up in my Facebook Feed one day. And it looks almost as chilling as the real thing! After chatting with Lampert and watching the BTS video, I learned that he relied mostly on practical effects and DIY, with very little photo manipulation. I think that gives even more charm to the photos. 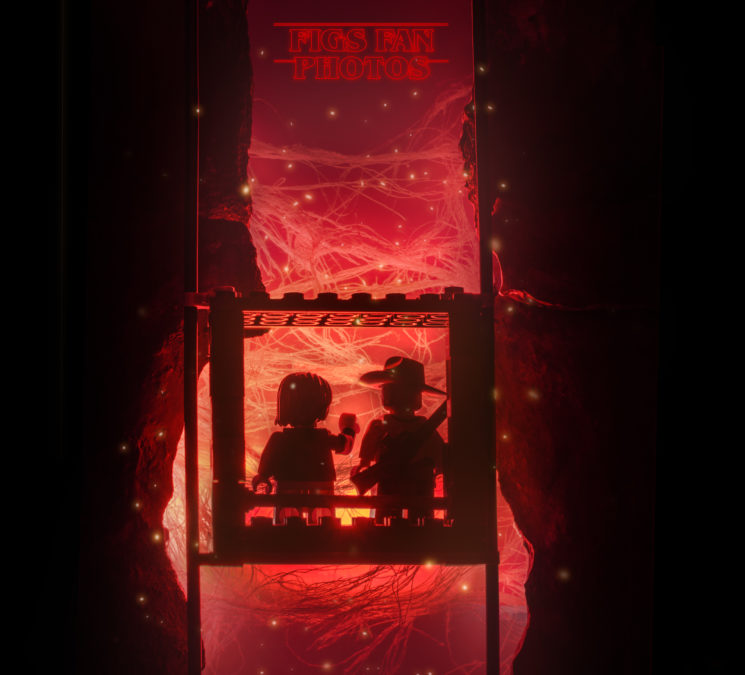 For example, for the shot where Eleven closes the gate, he made “walls” from plaster and cardboard. He used sterile gauze to create the gate and shone a red light onto it. Who would have thought that a piece of gauze could recreate the gate to the Upside Down so well? In this particular shot, the only thing that was added in post were the flying particles which are characteristic of the Upside Down. 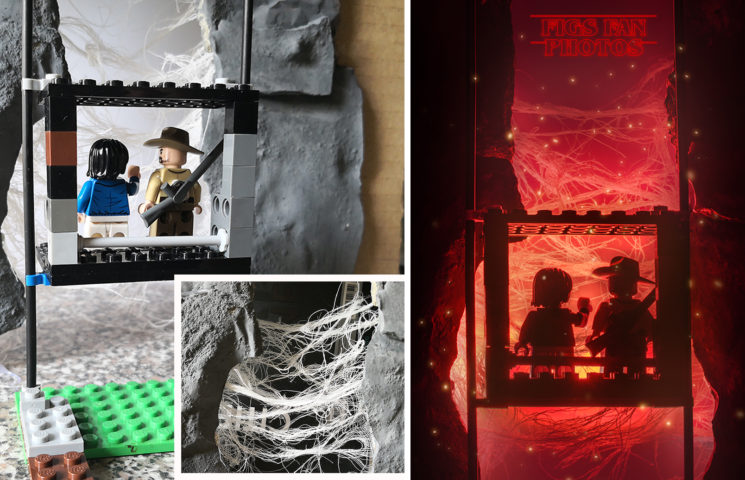 Lampert combined the Stranger Things LEGO set with other props. For example, he placed the figurines onto dirt and added pipe smoke for the fog. He used vine branches in a photo where Will is running from the Demogorgon. To recreate the famous scene with Joyce, letters on the wall and Christmas lights, he added actual Christmas lights. And these are only some examples. Here’s the BTS video where you can see what it looked like to create some of these photos:

Lampert notes that he doesn’t use the green background for masking, but as a homogeneous background. This means that he can later turn it into any color he wants. However, there are some things that were done in post, as I previously mentioned. In photos where there are cars, bikes or flashlights, the light was also added in post to make the shots look more realistic. I was curious to know how the water reflections were done, since they totally look like the ones in the series. Lampert is sad to admit that they were also done in post after he tried recreating them with actual water. The thing is that, at this scale, the surface of the water doesn’t provide the desired look. Plus, the ripples are too big for the little LEGO figurines.

I leave you now to enjoy more of these awesome LEGO Stranger Things photos, as well as BTS photos. And make sure to check out more of Lampert’s work on his Facebook page and Instagram. 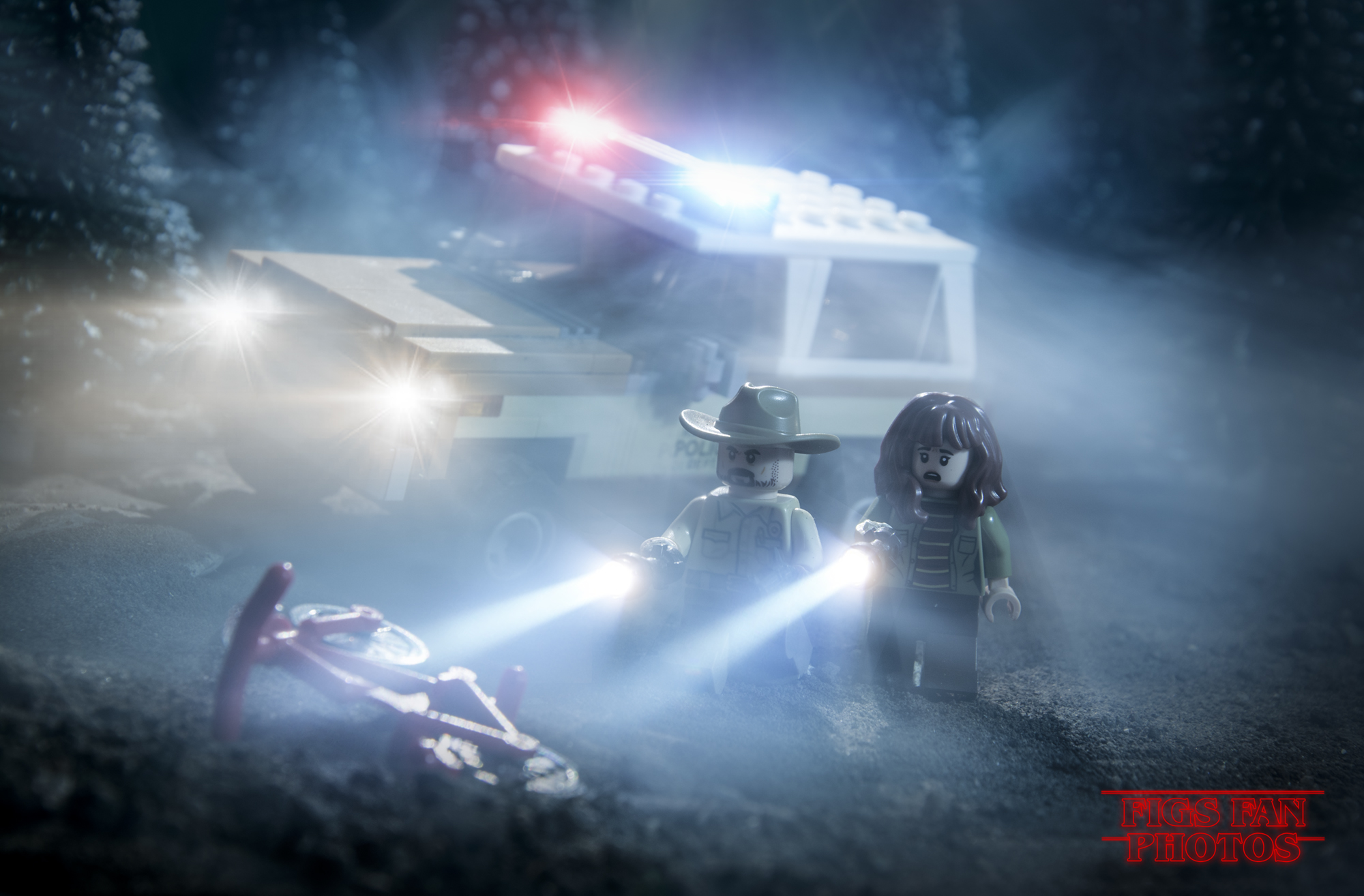 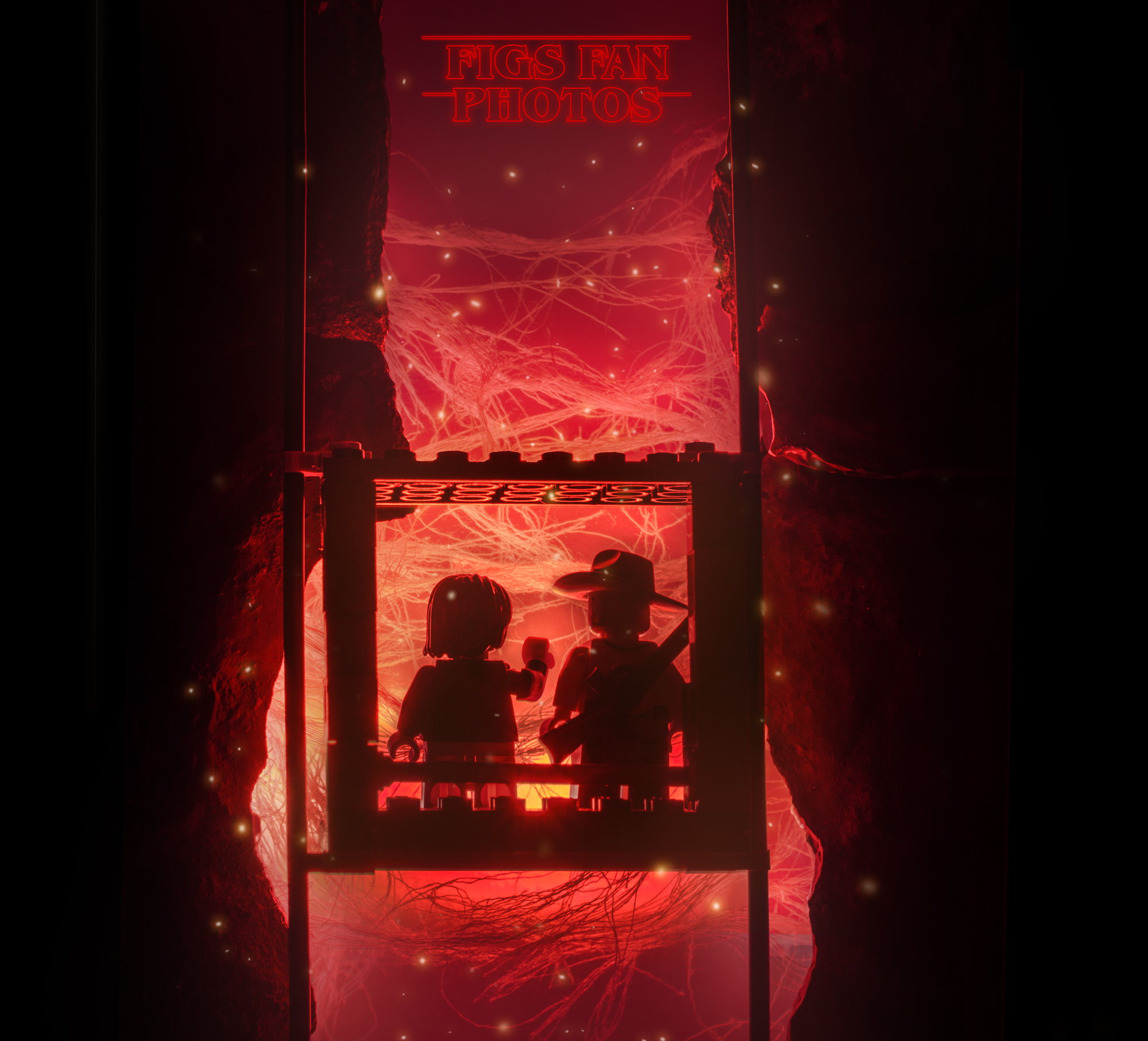 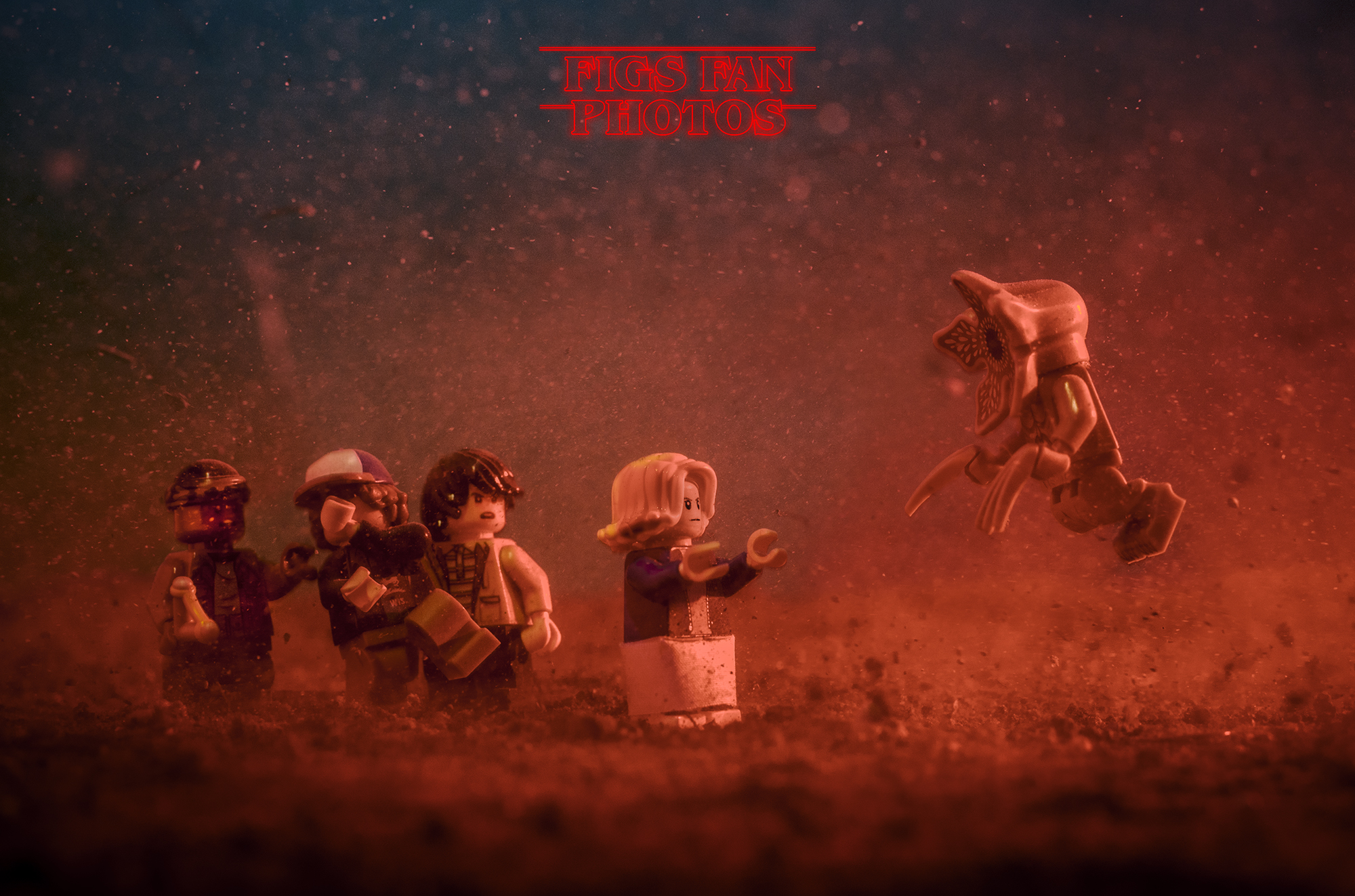 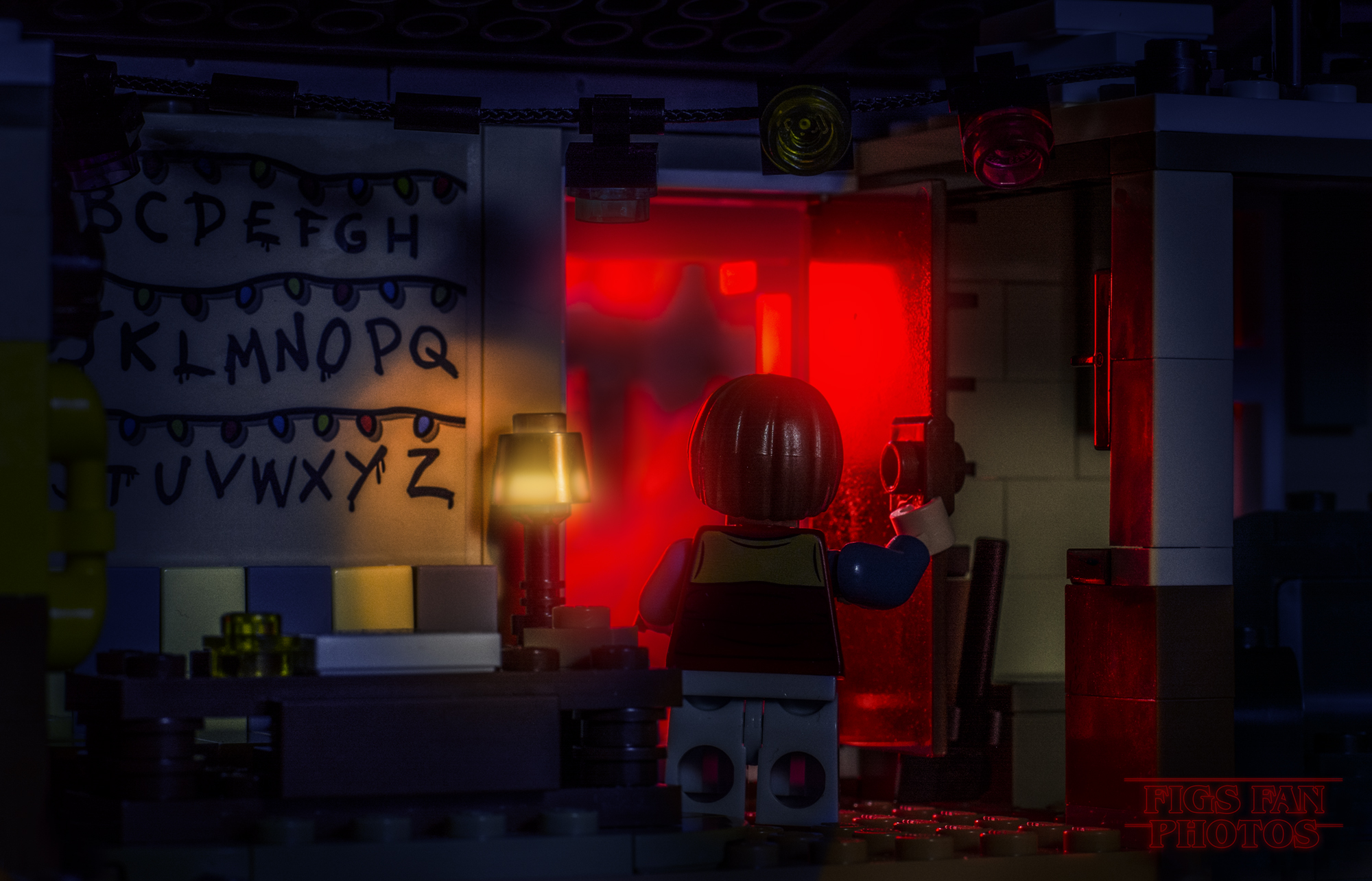 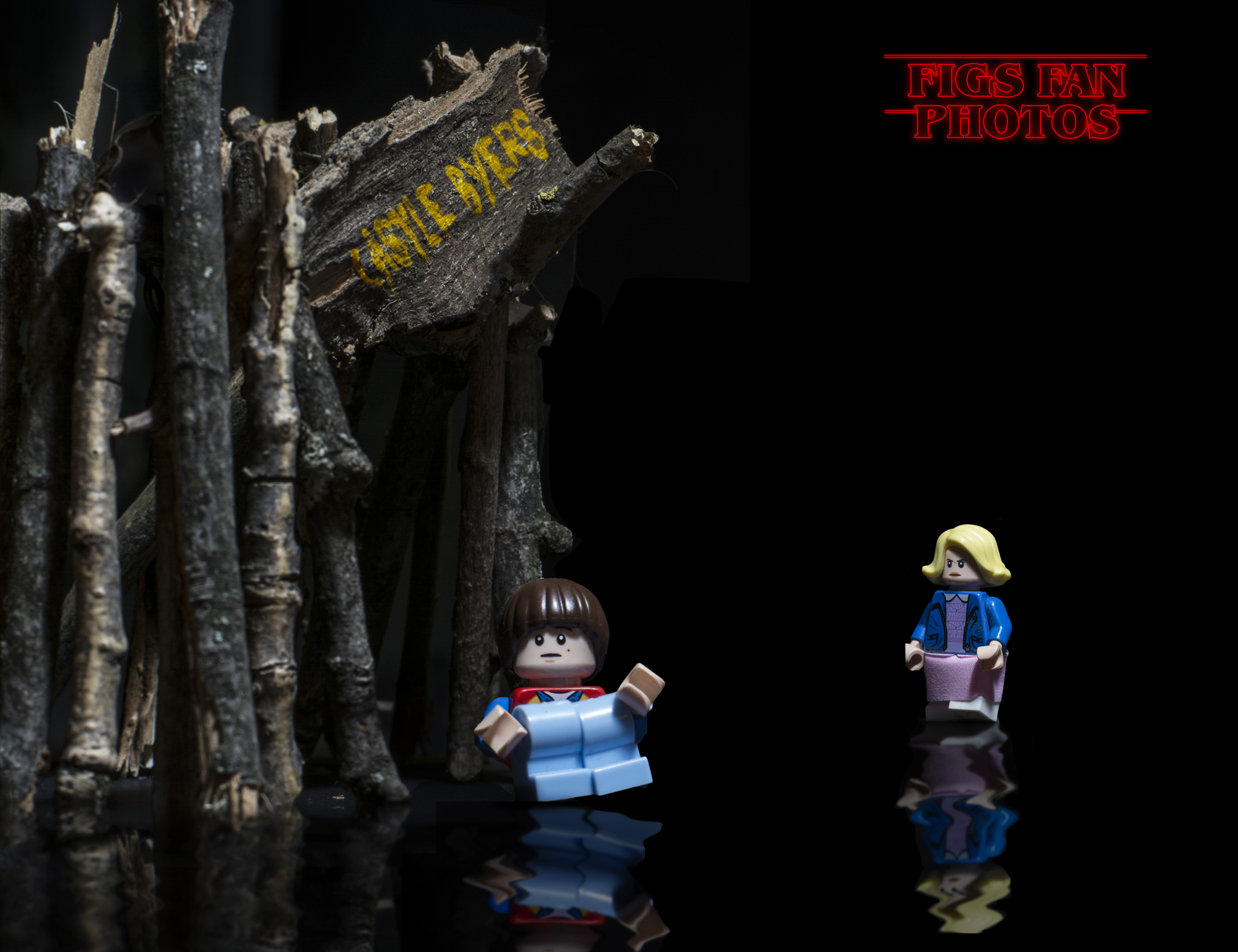 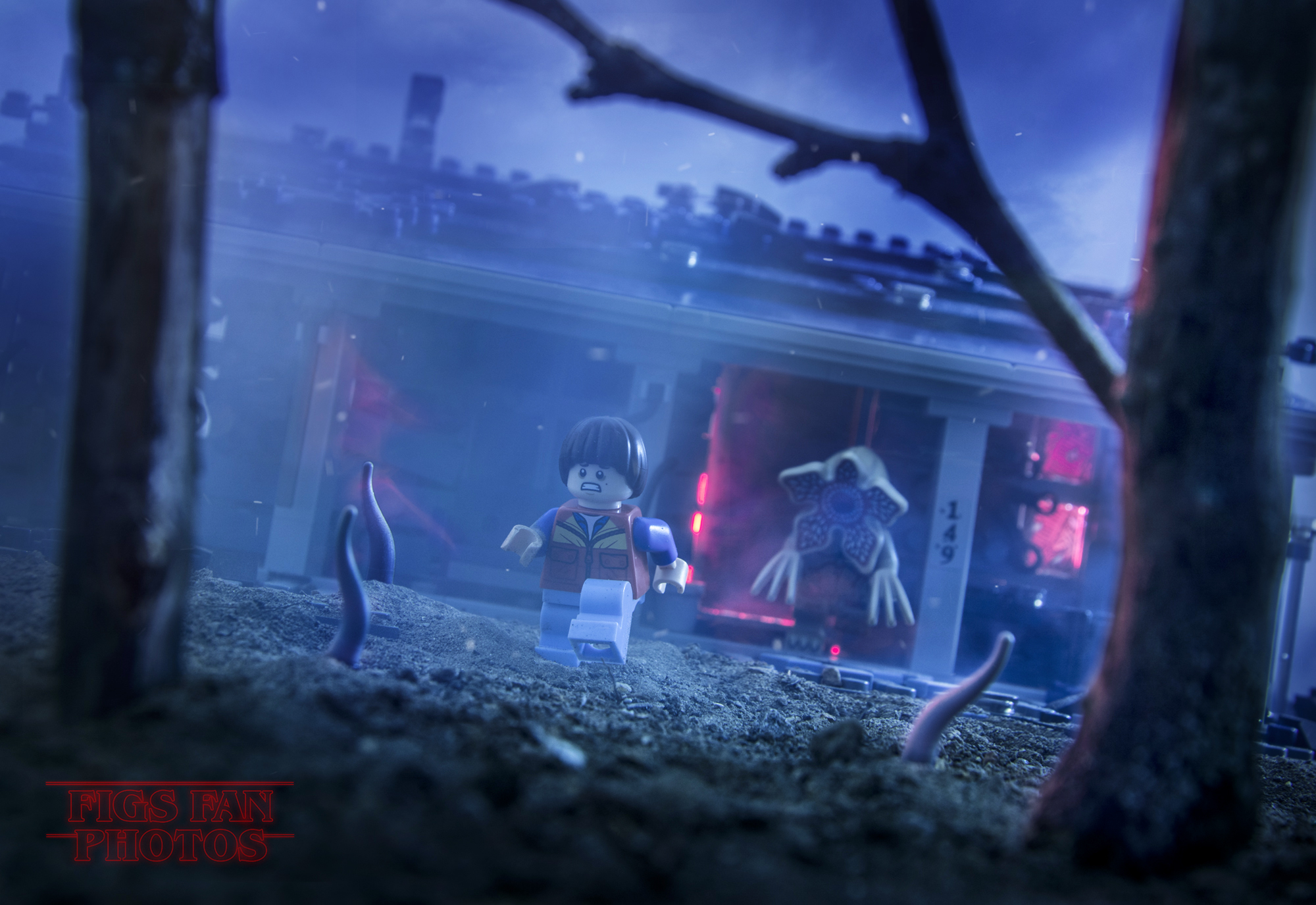 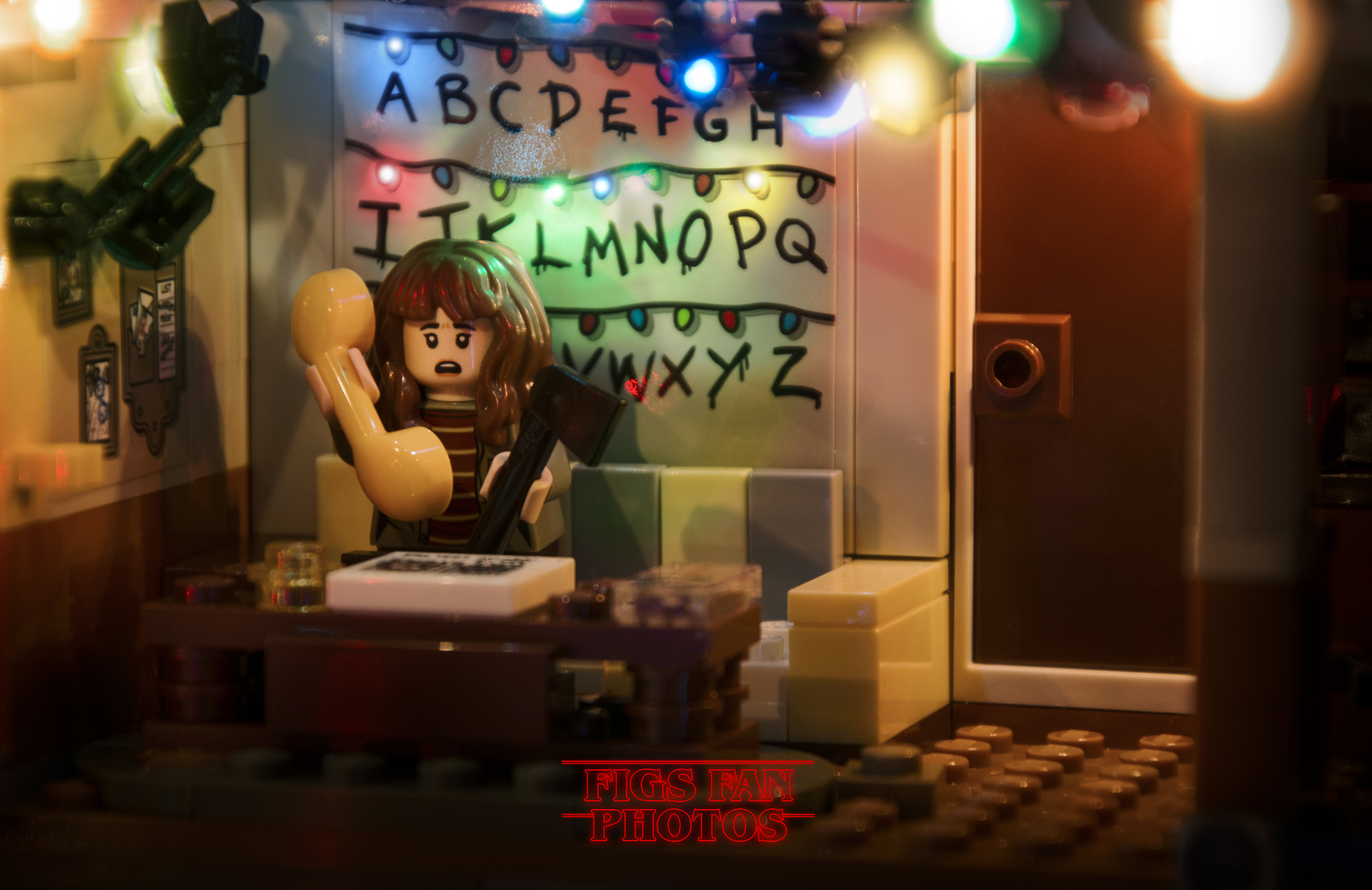 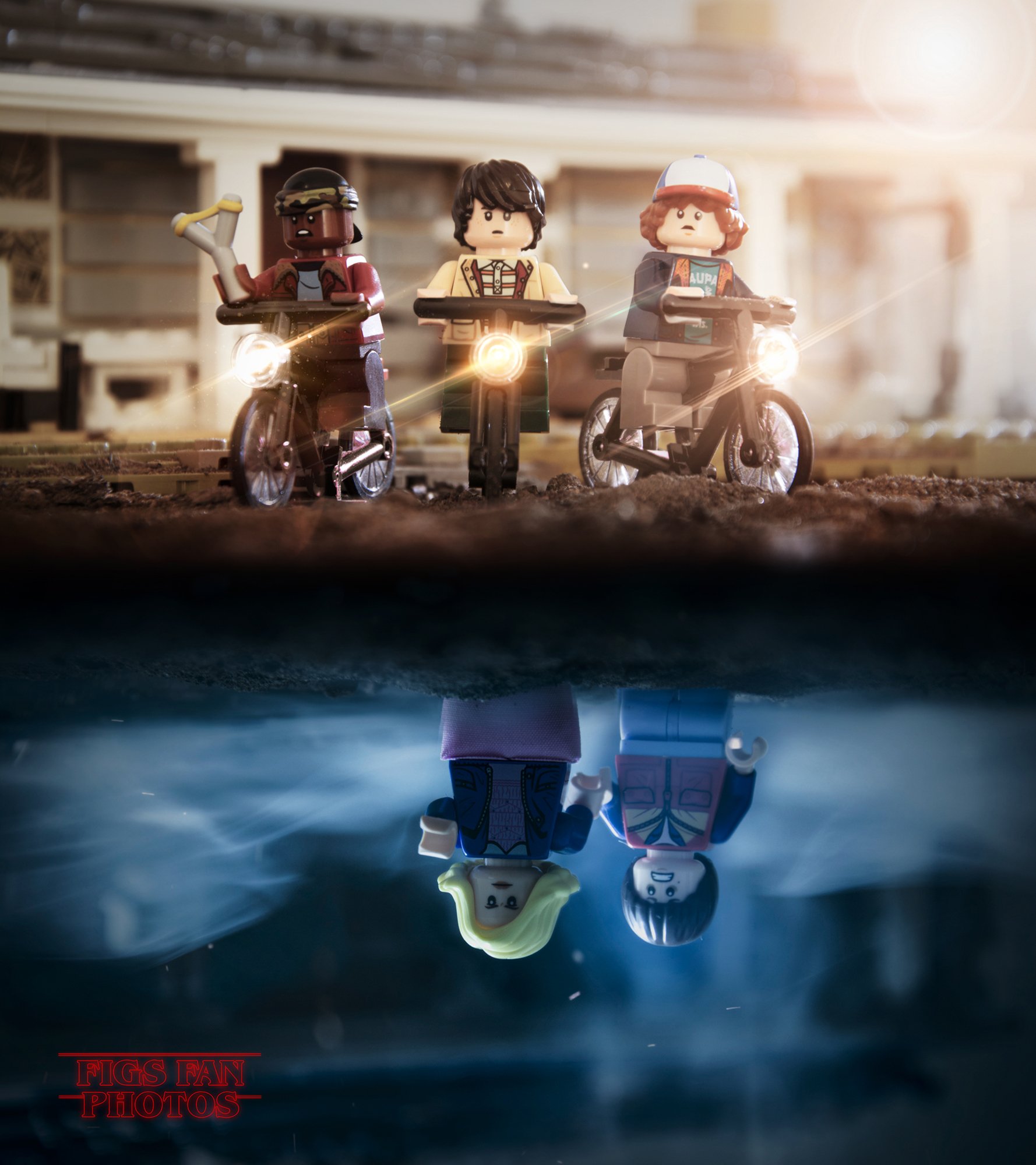 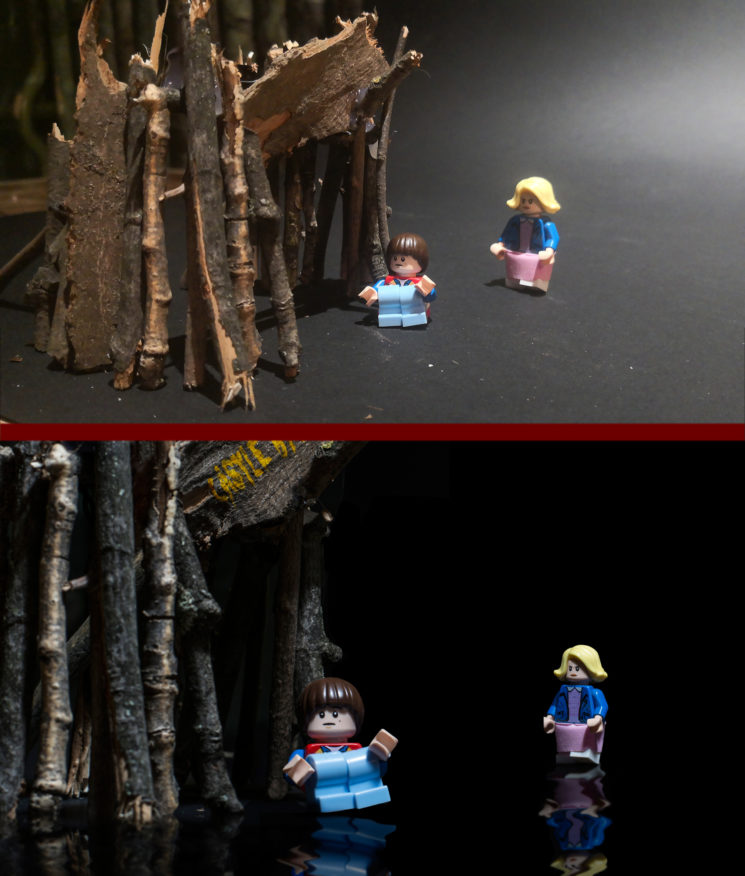 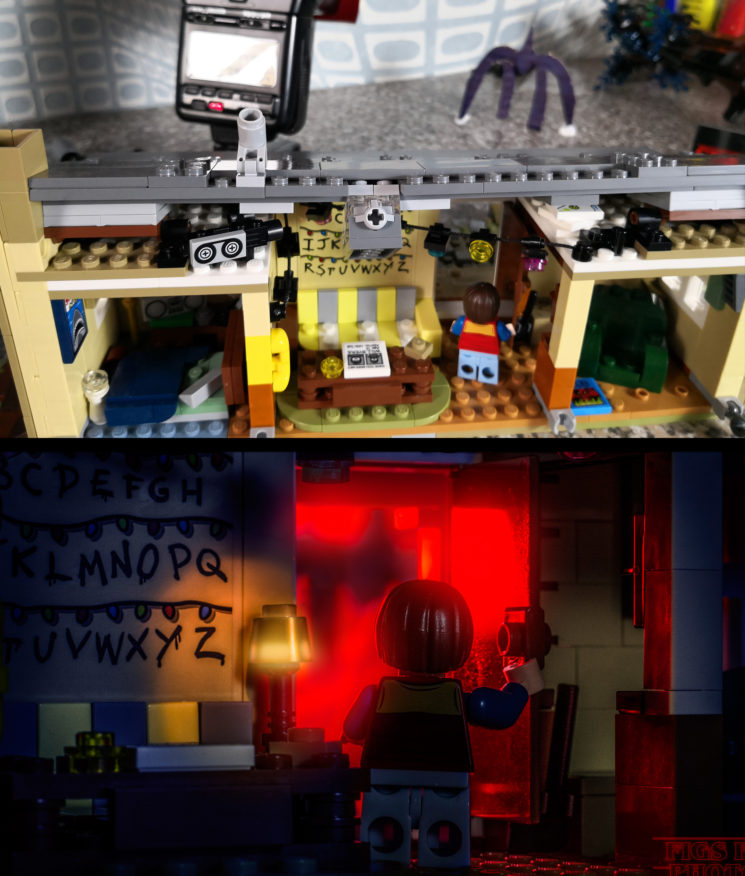 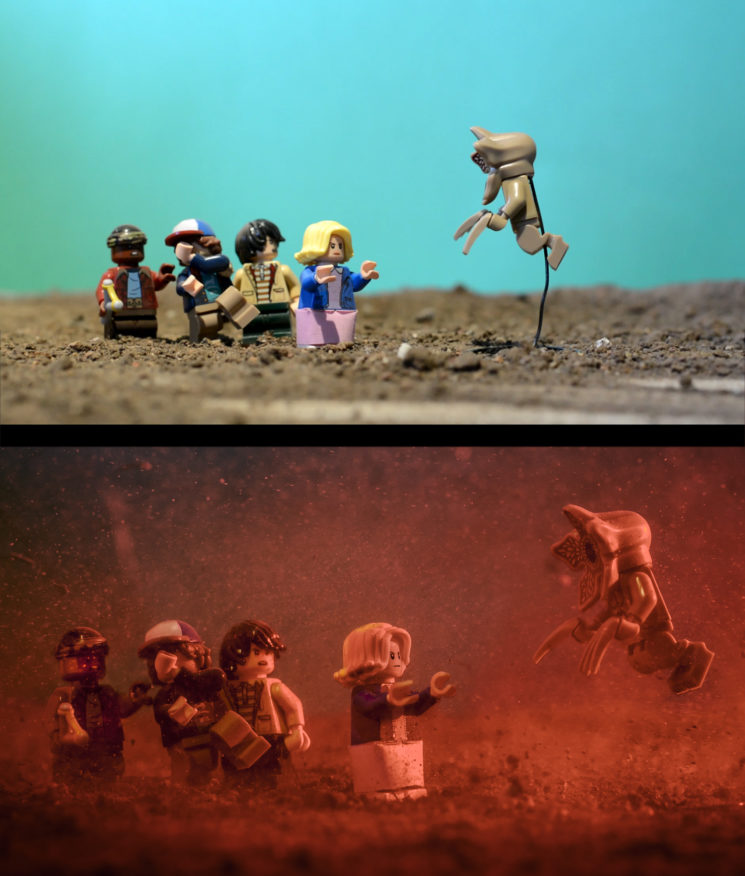 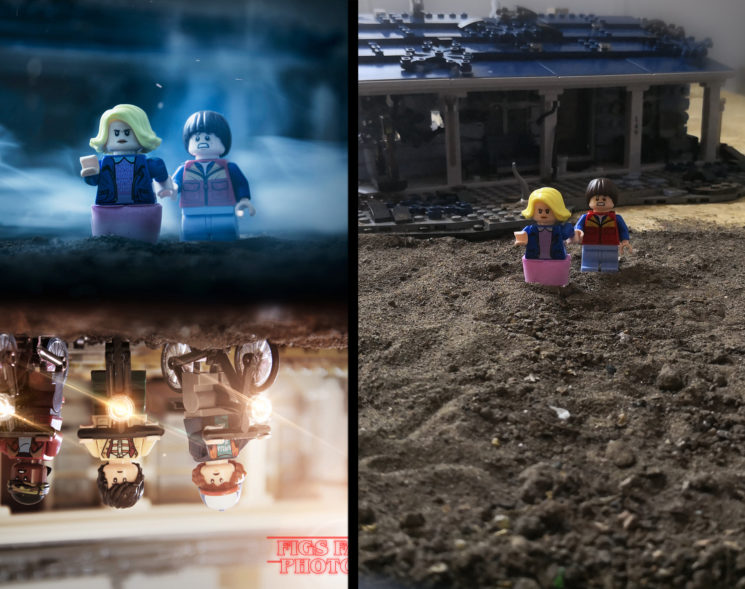 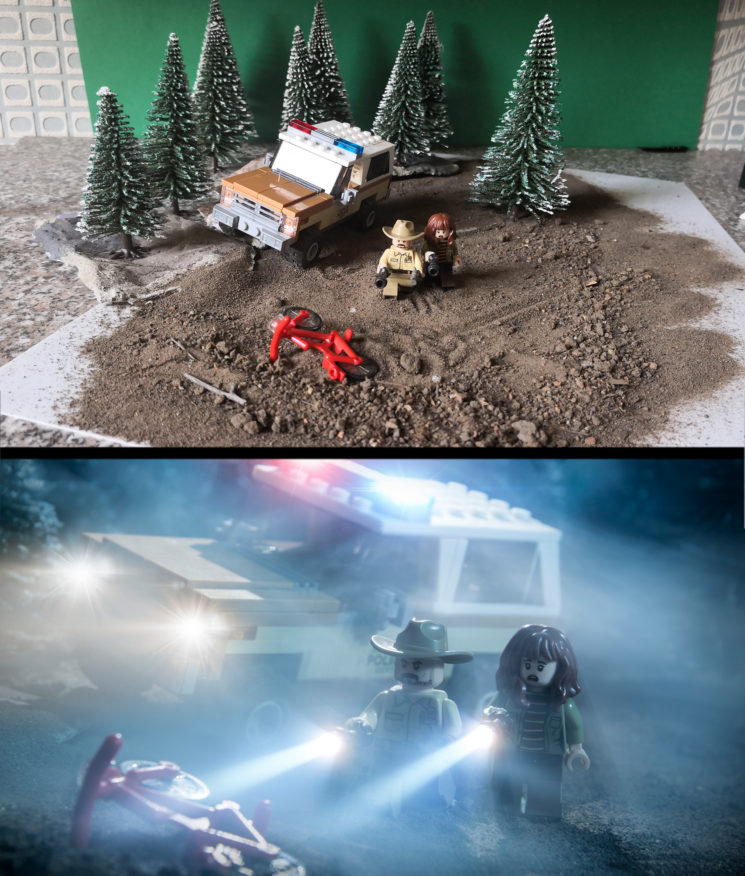 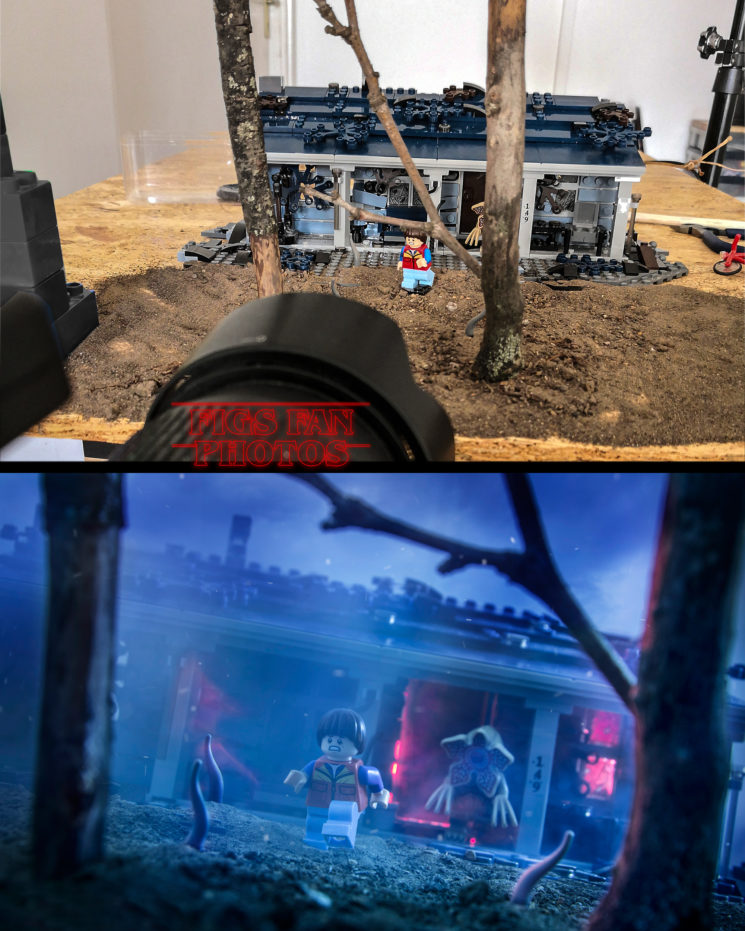