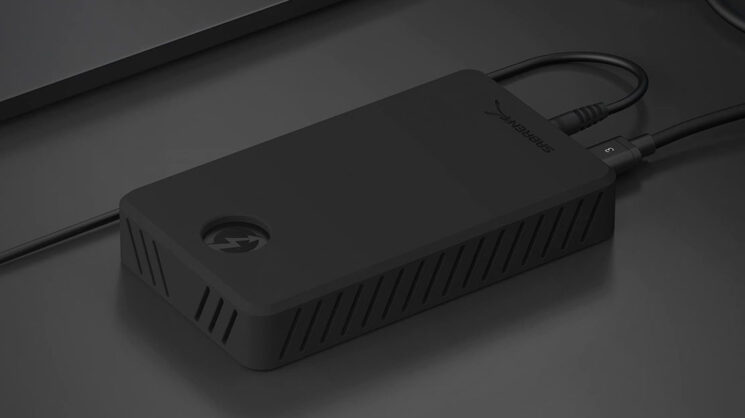 Sometimes, you just need a whole lot of external storage and you need it to be really, really fast – especially if you’re shooting video. There are a lot of great fast options out there from companies like Western Digital, SanDisk and Samsung, but when it comes to speed and capacity, Sabrent really takes the cake with this 16TB monster of a drive.

Claiming speeds of up to 2,800MB/sec, the Sabrent Rocket XTRM-Q 16-TB external SSD actually contains a pair of 8TB NVMe SSDs in a tough aluminium housing with a rubber case. And it costs a whopping $3,300 – unless you get it from Amazon, where it’s currently available for the relative bargain of $2,900.

Containing two separate 8TB NVMe drives, the Sabrent Rocket XTRM-Q can be configured in either RAID 0 (optimised for speed), RAID 1 as a “backup” (Editor’s note: RAID is not a backup) or JBOD where it writes to one drive until it’s full and then moves onto the next one. So, you get a few different options depending on how important the speed really is – which is anywhere between 1,400MB/sec and 2,800MB/sec depending on the mode.

Unlike most external SSDs, this one isn’t all that portable. It’s Thunderbolt 3 compatible and the company says that they’ve been working with Intel to get legit Thunderbolt certification for use with both Mac and PCs. Although, apparently, that certification doesn’t include any kind of USB Power Delivery as it requires an external power supply.

For me, this kind of defeats the purpose of a small, fast, external storage device like this. If you’re still tethered to plug sockets, what’s the point? You can go with pretty much any (much less expensive) storage options if you’re stuck to using it in just one place.

It sure is a beast and I’m sure there are people out there who’ll be jumping on this as soon as they can, but for me, I’d want something that didn’t require an external power supply and could run just plugged straight into the Thunderbolt 3 socket of my laptop. But maybe that’s just me.

« Did the media frame the George Floyd protest coverage for white eyes?
When and why you might want to use ND filters for your photography »