As photographers, backing up our images has sort of become a passion, and so it should.  The catch-22 in the situation is that hard drives (the ones with the little DJ in there spinning laser-read disks) offer the most storage space but suffer from low long-term reliability.  We therefore resort to all kinds of other methods to increase file redundancy, such as cloud storage.  Solid state drives (SSD) are great (and fast), but they have typically been rather limited in capacity.  That…is changing.

The other day we reported on Samsung’s new 256-gigabit flash technology that would significantly increase the storage capacities of solid state drives, but we had no idea they were aiming for the moon and hitting it!

Samsung has since unveiled the culmination of this technology:  the world’s largest SSD hard drive.

Samsung’s PM1633a is a 16 TERABYTE solid state behemoth that offers more storage space than any standard consumer could put to use in their lifetime, including most photographers.  That’s more than 11 million of those 3.5″ disks we asked you about yesterday.

There’s a bunch of technical specifics that are just way over my head, but for those of you interested, you can read more about how they actually fit it all in there here. 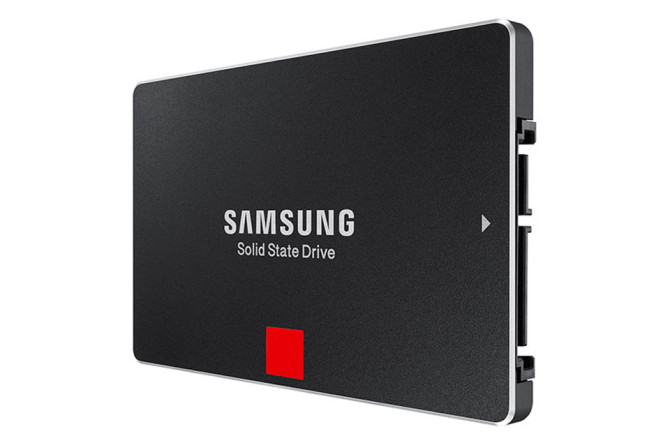 What This Means for Photographers

That’s what you really care about anyhow, right?  It’s the same as with most technology:  fitting more stuff in a tinier package…AND…traditional hard drives, as we know them, could be on their way out.

Why is this good?

Hard drive disks (HDDs) have a significantly shorter lifespan than solid state drives.  Because of the technology on which they are built, dependable usage can be counted on for about five years (although, less is a common occurrence).

However, solid state drives offer greater reliability because instead of a magnetic head writing and rewriting information to a shiny, spinning disk, SSDs rely on electronic impulses interacting with non-moving (“solid”) cells.  Again, it gets very technical here and my mind starts wandering, so lets move on.

The Tech Report ran a test starting in 2013 in which the durability of solid state drives were tested.  According to Digital Trends:

“A typical manufacturer’s SSD lifespan is rated at 20GB of writes per day for three years—or just under 20 terabytes (TB) of total data written. Using Anvil’s aptly named Storage Utilities software, the SSDs are subjected to endurance tests consisting of constant writing, deleting, and then writing again of various-size files. During the tests, Storage Utilities continuously monitors data integrity and write speeds, and in addition, all SSDs in the test have the ability to count host writes and provide overall health estimates.

“[A]ll of these drives continued to function well past the total number of terabytes they’re rated for, which, as mentioned earlier, is about 20 to 30 terabytes over a three-year period. The first one to fail, the HyperX, went after a whopping 728TB, or the equivalent to about 1,020 years at the rate of 20GB per day.”

The equivalent of 1,020 years…and that was the weakest one…

So, what we have in Samsung’s new unveiling is a product that can store more data than any other drive on the planet with a lifespan that could easily outlive the planet itself!

Well, “AGAIN”…  I think it’s pretty obvious.  What we are seeing here is the beginning of what could be a storage revolution (not to be confused with that crappy “reality” show that came and went) that could change our backup workflows.  Most persnickety pundits are estimating that the new hard drive won’t retail for less than $5,000 which puts it well out of range for most consumers.  BUT, as with all technology, prices will drop, and I’m expecting to see this pared down into simpler, more affordable offerings for those without a corporate-sized budget.  (I mean, who really needs 16 bloody terabytes unless you’re doing major video production work?)

Imaging Resource took the time to break down the specifics to give us a little comparison.  To put things in perspective, 16TB is the equivalent of:

305K 50MP RAW files.  Still trying to wrap my head around that one…

More storage space, greater reliability, less of this having-t0-replace-another-hard-drive BS…just unlimited on-site storage with a dash of peace of mind.  Well, it may not be too much longer, folks…

P.S. Just for getting the scale of things, see if you know how much storage the ‘big’ disks of 30 years ago had.

GoPro Plus now offers unlimited storage for your photos and videos