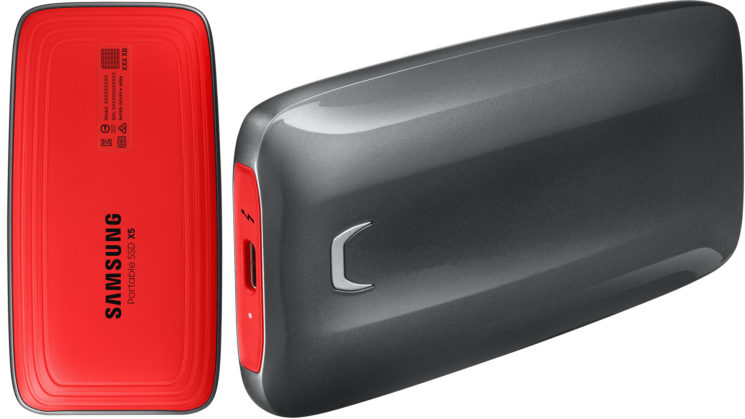 Portable external SSDs are still in their fairly early days, as far as adoption goes. But that isn’t stopping companies like Samsung from making them bigger and faster already. Samsung’s T3 and T5 SSDs have proven to be quite popular, but the new Samsung X5 SSD really takes it to the extreme offering transfer speeds of up to 2,800MB/sec.

The new X5 marks something of a landmark for Samsung. This is their first NVMe-based solid state drive, offering some pretty outstanding speeds. It’s almost as fast as the internal SSD in my ASUS ZenBook Pro. Being able to utilise those speeds on an external drive, though, is thanks to Thunderbolt 3 Type-C USB. So any Mac or Windows PC that has Thunderbolt 3 should be able to use this drive at full speed.

That 2,800MB/sec mentioned above is the read speed, with the write speed is a little lower at 2,300MB/sec. But this is still insanely fast, especially when you consider that many folks still stack multiple HDDs together in RAID configurations, especially for video editing, that still achieve nowhere near these speeds.

The X5 is also 5.2x and 4.5x faster than the read & write speeds of Samsung’s T5 SSDs. Side note: I just received a Samsung T5 recently, so expect a review soon!

Although photographers might not need these kinds of speeds, filmmakers will certainly benefit. If you’re editing a 4K multicam video shot in 10Bit 4:2:2 ProRes HQ, you need the fastest transfer rates possible to prevent stuttering while you edit. And with cameras like the soon-to-be-released Blackmagic Pocket Cinema Camera 4K having the capability to record video directly to external SSD, fast external storage is becoming more important than ever.

Of course, such speed does not come cheap. But did you really expect it to?

« Bokeh or Nokeh – What Is Your Preference (and Does It Really Matter)?
Nikon launches D3500: more compact, cheaper and with more battery life than its predecessors »