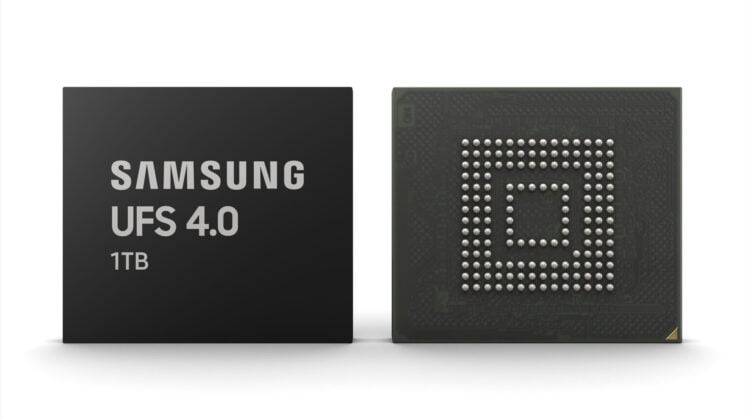 Samsung Semiconductor has announced its newest UFS storage tech. UFS 4.0 uses Samsung’s 7th Gen V-NAND memory and with a proprietary controller that offers some insane read and write speeds as well as big power savings. Interestingly, Samsung did not choose to announce this via their usual Newsroom website but through Twitter. There were plenty of tweets, though, going over some of its specs.

Samsung’s UFS storage is intended primarily for use in smartphones, although with the number of Android-powered devices out there and cameras that run entire operating systems and feature internal storage, there is a lot of potential in other markets, too. And boasting read and write speeds of up to 4,200MB/sec and 2,800MB/sec respectively, they certainly seem capable of handling the demands of today’s high-resolution cameras.

According to Samsung Semiconductor, UFS 4.0 doubles the speed of UFS 3.1, announced in April 2020 with up to 23.2Gbps per lane. They say this makes it “perfect for 5G smartphones” (although they basically said that about UFS 3.1, too) that require large amounts of data processing. Samsung also expects it to be adopted in the future into automotive applications as well as augmented reality and virtual reality systems.

The 7th generation V-NAND tech and Samsung’s proprietary controller allow for a sequential write speed of up to 2,800MB/sec – about twice as fast as current CFexpress Type B cards – and read speeds of up to 4,200MB/sec. I could easily see this potentially being implemented into drones in the future that often seem to come with at least some internal storage these days. With this sort of capacity and speeds in a drone, especially if it’s got a decent interface that lets you max out USB 3.2 Gen 2 speeds (or Thunderbolt 3) when transferring your files to the computer, that could potentially be a huge benefit to aerial filmmakers.

Samsung also says that the power efficiency of UFS 4.0 has been improved, too, offering a 46% performance boost over UFS 3.0 for extended battery life in portable devices. They say it can transfer about 6MB/sec per mA which means at a full write speed capacity of 2,800MB/sec, it’s drawing less than half an Amp.

Mass production is expected to begin in the third quarter of 2022 but when we’ll actually see it in devices is unknown, but I’d expect they’ll probably start popping up (or at least being announced) by the end of the year.