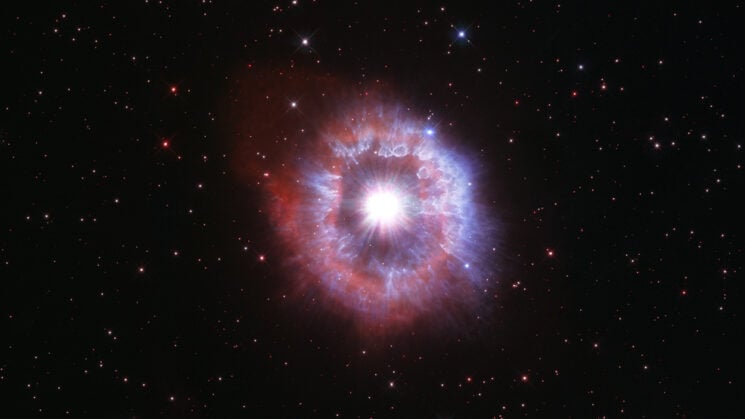 Since its launch, the Hubble Space Telescope has produced some amazing imagery. But a new picture was just released to celebrate its 31 year anniversary that’s just incredible. The giant ultra-bright star, AG Carinae, exists 20,000 light-years from Earth. It’s 70 times larger than our sun and around a million times brighter than our Sun.

But right now – at least, from our perspective 20,000 light-years away on Earth – it’s in a battle with itself. Its huge mass has gravity pulling everything inwards while radiation is pushing everything outwards with a level of force that we mere mortals can’t even begin to comprehend. It sure does result in a beautiful image, though.

NASA says that the huge structure was created from one or more giant eruptions around 10,000 years ago, which caused the star’s outer layers to be blown out into space. “Like a boiling teapot popping off its lid”, as NASA puts it. They also say that the amount of material sent out equates to around 10 times the mass of our Sun.

It’s called a Luminous Blue Variable and they are extremely rare, with only 20 such objects currently listed in the General Catalogue of Variable Stars. The radiation, NASA says, causes winds travelling at up to 670,000 miles per hour, constantly pushing material further from the star as warm winds reach it and heat it up. But at the same time, the star’s immense gravity is pulling it all back in.

They’re not constantly in this state, though, going through periods of relative dormancy, and then wild supernova-like outbursts, each of which can last a few months or go on for decades. Such stars have short lifespans of only a few million years, as opposed to our own Sun, which has an estimated total lifespan of around 9.5 billion years.