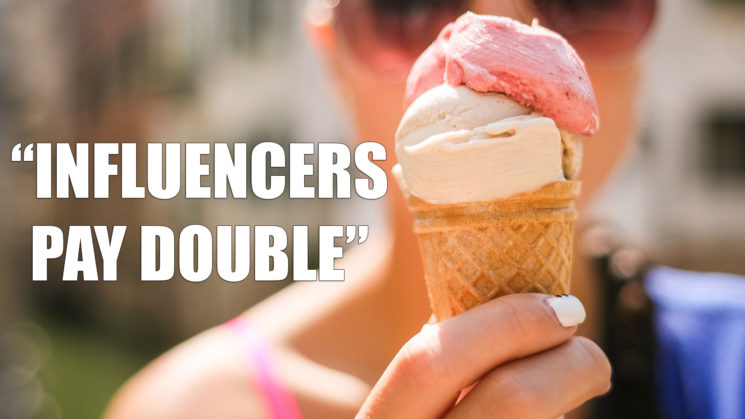 We’ve all heard of Instagram influencers who ask for freebies. I’ve always thought that they usually ask for pricey stuff, such as photography services, or free accommodation on exotic locations. But it turns out that some of them go as low as asking for free ice cream in exchange for “exposure.” The owner of L.A. ice cream truck CVT Soft Serve got fed up with this. So, he decided to charge Instagram influencers double.

Joe Nicchi is the man behind CVT Soft Serve. He’s had plenty of requests from Instagram “influencers” to get free ice cream in exchange for promotion. But he really had enough after one request. “Last Thursday, I got an event request to do a party on a weekend for 300 people in exchange for the word they love to use, which is ‘exposure,'” he told VICE. “I can’t do that; I can’t work for free.”

In a follow up post, Joe explains that they’d decided to “make this thing official.” In other words, he printed a sign and put it on his van.

“We truly don’t care if you’re an Influencer, or how many followers you have. We will never give you a free ice cream in exchange for a post on your social media page. It’s literally a $4 item…well now it’s $8 for you.”

As Joe told VICE, the influencers usually approach his van with “Hey, I don’t know if you follow me or not,” then they tell him their screen name and say “If you want to hook me up with a cone, I’ll post it to my story.” And Joe said his first thought is “Are you out of your mind? This is a $4 ice cream.” Or actually, it’s $8 if you mention that you’re an influencer.

I find Joe’s move brilliant and even funny. I mean, if someone would as low as asking to get a $4 ice cream “in exchange for exposure”… Then paying $8 is the least they can do.