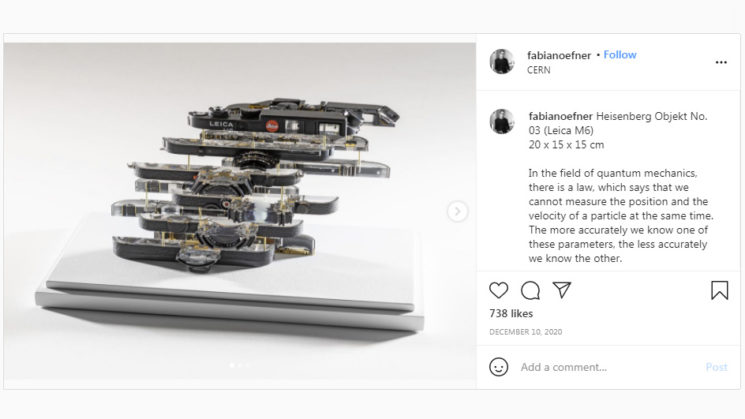 The artwork of Fabien Oefner is going to hit people on this site in one of several ways… The first will be “Wow! That’s freaking awesome!”. The second will be [Insert Ryan Reynolds “But why?” GIF here]. The third will be screams of blasphemy with lots of tears. If there’s another response I’ve not thought of, let me know in the comments.

Once you see Oefner’s work on Instagram, you’ll quickly understand why the potentially polarising reactions. He likes to take things apart, but not in the traditional sense. He doesn’t dismantle them. He casts them in resin and then slices them up. like slivers of an MRI. Then, he sets them in their new permanent form.

Oefner’s work, particularly with the Leica is definitely going to make a few people squirm. Watching him do his thing in the video above is a bit like a train wreck. You can’t bear to watch it but it’s also so fascinating that you just can’t look away. As well as cutting up actual real deal Leicas, Oefner has also made some plaster copies that look quite striking when chopped up.

This isn’t the first time that Oefner’s attacked cameras. Past works include this Nikon D800 DSLR…

And then there’s the Rubix Cu… I mean Rolleiflex.

Despite the subject matter, it is very cool artwork and it’s interesting to see the cross section view of objects many of us use in our daily lives. If you’re even slightly interested in this bizarre corner of the art world, it’s well worth a browse through Oefner’s Instagram to check out the other interesting and crazy things he’s chopped up.

How we made this exploded view of a floating Sigma 105mm f/1.4 Art lens