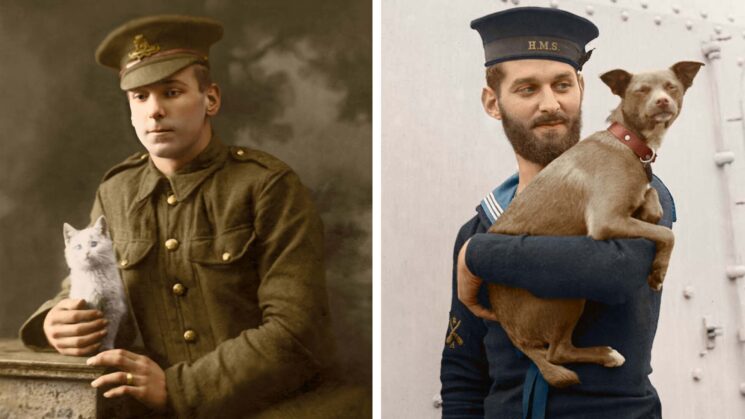 If you have a pet, you know how important animals are in our lives. They keep us company, give us their love and trust, and keep us sane even during the most difficult periods. Tom Marshall of PhotograFix recognizes the importance of animals and their role in human lives. So, he has colorized photos of animals that accompanied or helped the soldiers in the First and the Second World War. The photos not only give these lesser-known heroes a new life, but also remind us of the importance of animals in the toughest of times.

Tom is a photo colorizer and restorer. He has worked with some of the world’s leading museums, photo archives, and publishers. However, he still enjoys taking private commissions and personal projects. Animals of War – In Color is Tom’s personal project that he made to pay a tribute to the furry and feathery war heroes.

“I have always been fascinated by the stories of animals in wartime, both those in service and those used as mascots and companions,” Tom writes on his website. “The photos I’ve colourised show a mixture of the two.” Tom notes that some of these animals are undoubtedly “heroes for the part they played.” However, we mustn’t forget that they are also victims of human war.

“I live very close to the base of the Defence Animal Training Regiment near Melton Mowbray, Leicestershire, England which still to this day trains military working dogs and horses. Each year for Remembrance Sunday the Royal Army Veterinary Association will take part in a parade through the town, making sure the animal sacrifices of wars past and present are not forgotten.”

The photos Tom colorized for this series are from both the First and the Second World War, as I already mentioned. And this means that some of them are over 100 years old! There are different kinds of animals in the photos, all of which had different roles. Tom notes that some of them were later officially recognized and awarded by Dickin Medal.

Take a look at more photos below, along with the stories about the animal heroes in them. And make sure to check out more of Tom’s fantastic work on his website, Instagram, Twitter, and Facebook. 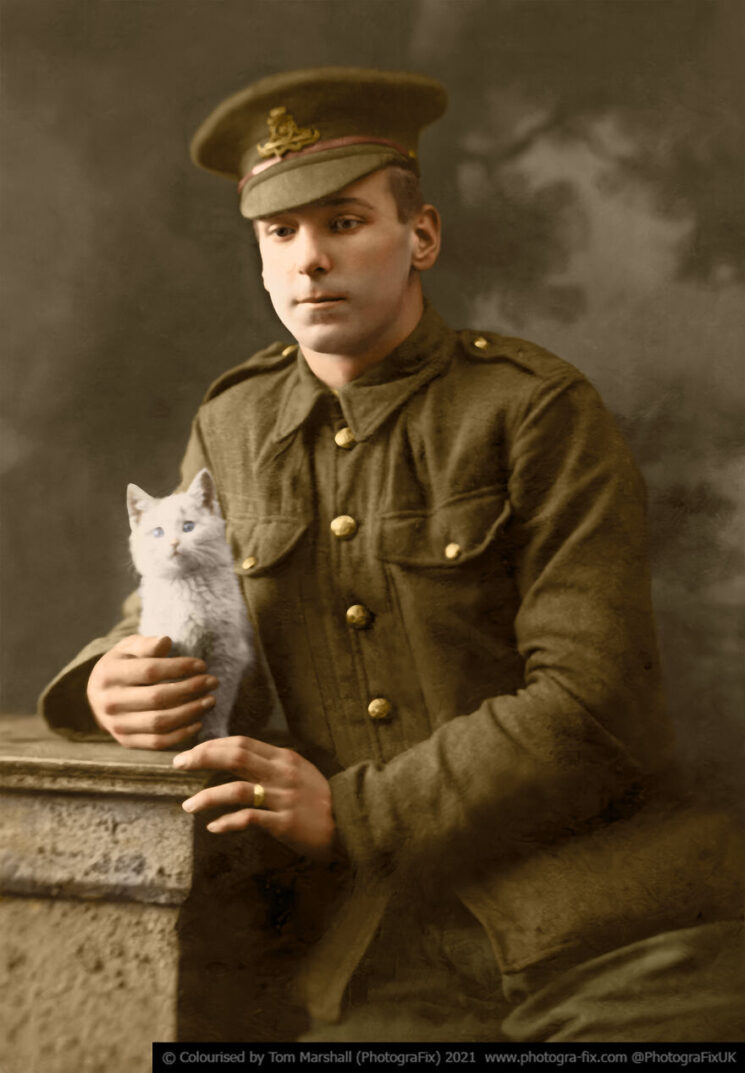 An unnamed British Royal Artillery soldier with his kitten, c1917. Animals were often brought into the trenches, sometimes as a mascot for the regiment, or in this case the kitten may likely be from a local farm or destroyed village. 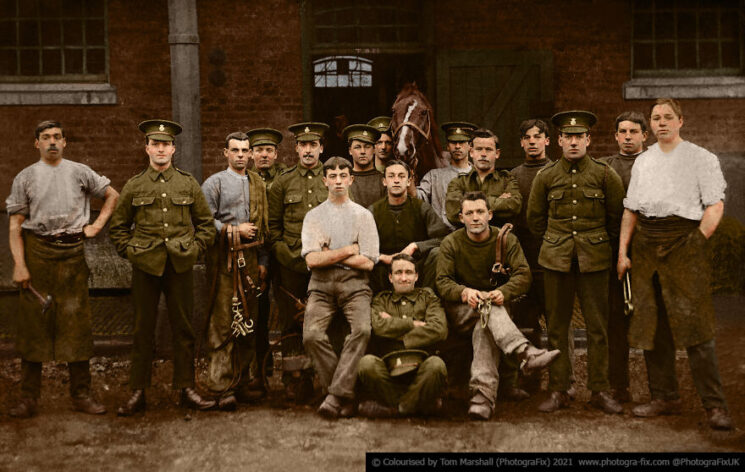 “This picture postcard was sent by William Field (1890-1917) to his brother Harry, postmark dated December 1909, from Aldershot barracks in Hampshire. William is stood third from the left with bridals in his arms.
The original post card is still owned by Harry’s daughter Margaret, who is 90 years old, and I was commissioned to colourise the photo by descendants of the family, Liz and her husband Andy. Thank you to Andy for permission to include the photo here.
William served with the 7th Queens Own Hussars at West Cavalry Barracks, Wellington Lines, but he died in action serving for the Kings Own Hussar’s in WW1. He laid to rest at Monchy British Cemetery, Monchy-Le-Preux, Pas de Calais, France.” 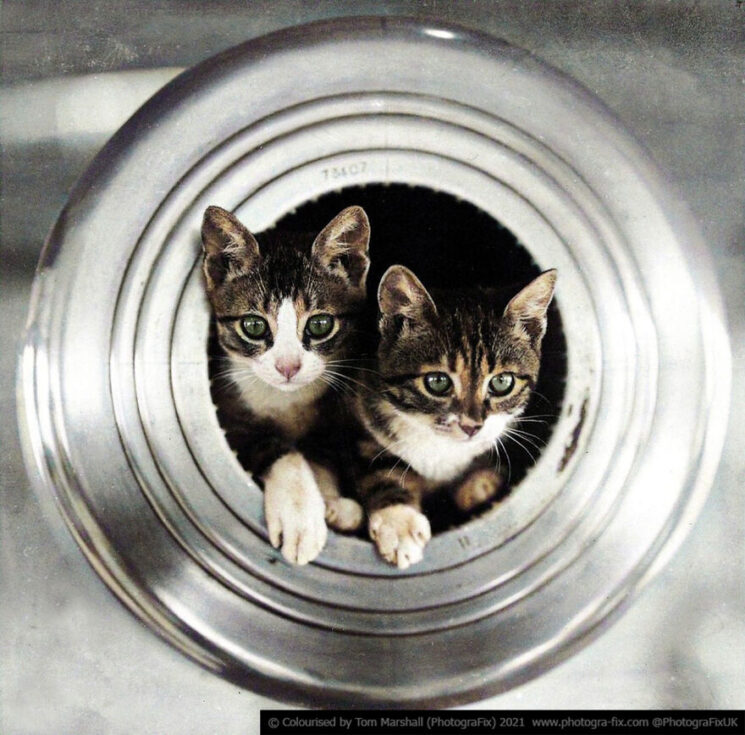 “The ship’s cat has been common feature on many trading, exploration and naval ships dating to ancient times. They were used to attack and kill rodents which would cause damage to ropes, woodwork, food, and stores, and would spread disease.
These two kittens lived aboard HMS Hawkins, a heavy cruiser built by the Royal Navy during the First World War, though not completed until 1919. The kittens are pictured inside the barrel of a 7.5 inch gun.
The Royal Navy banned cats and other pet animals from all ships on the ocean in 1975 on hygiene grounds, however cats are still common on many private ships.” 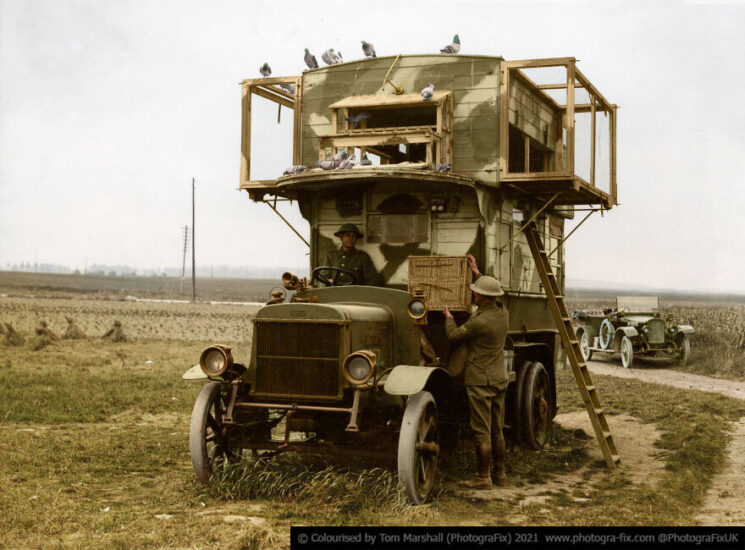 A B-type bus converted into a pigeon loft enabling messages to be sent from the front line back to headquarters. Over 100,000 carrier pigeons were used as messengers throughout WW1 and records show they delivered 95% of their messages correctly. 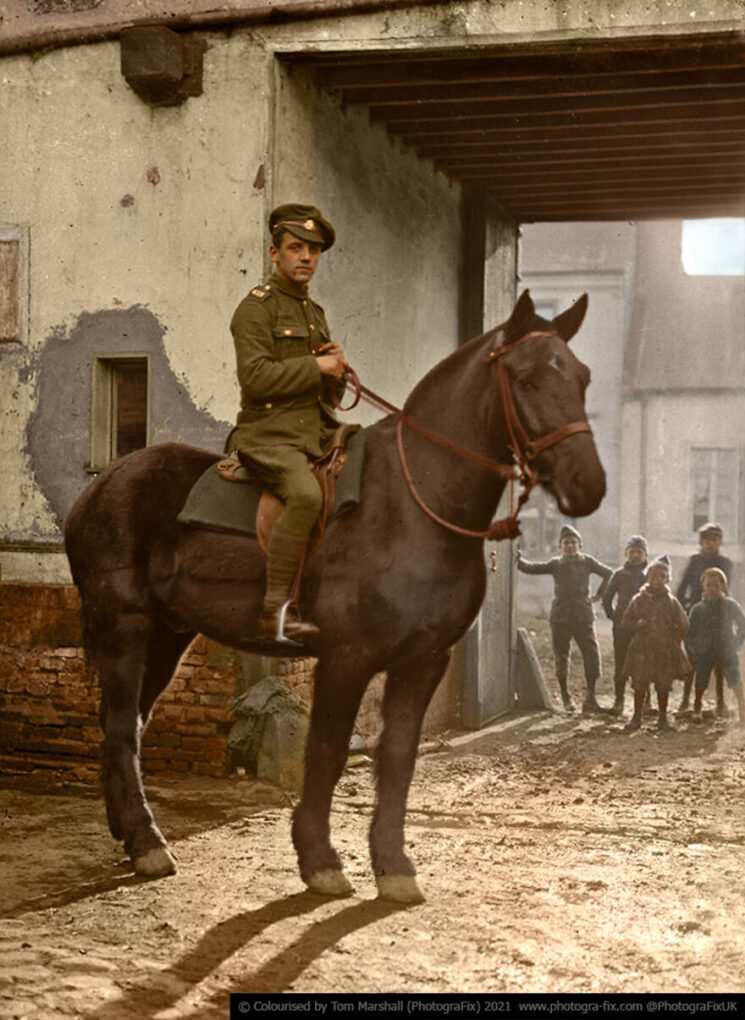 “An unknown British Tommy from the ‘A’ Squadron, the North Irish Horse Regiment. The most incredible play I’ve ever seen was ‘War Horse’ by Michael Morpurgo and Nick Stafford. It highlights the brutal torture horses went through in the First World War. It is estimated that eight million horses, mules and donkeys died during the war.” 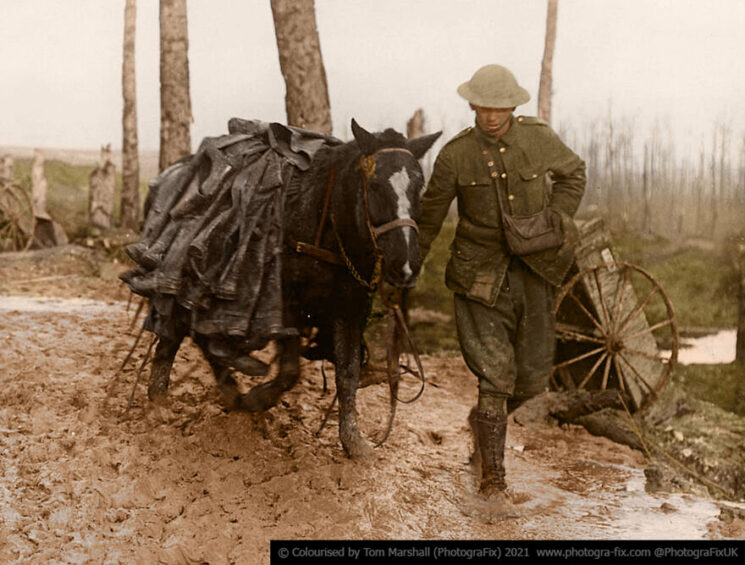 “A horse and soldier transporting boots. The path is inches deep in wet mud discernible by the deep imprint round the soldiers boot and the fact that the horses hooves are no longer visible. Rather than cloth puttees though he is wearing long lace-up boots.
The horse is absolutely laden with rubber trench waders. Horses, due to their reliability and ability to travel over most terrains were crucial to transportation during World War I.” 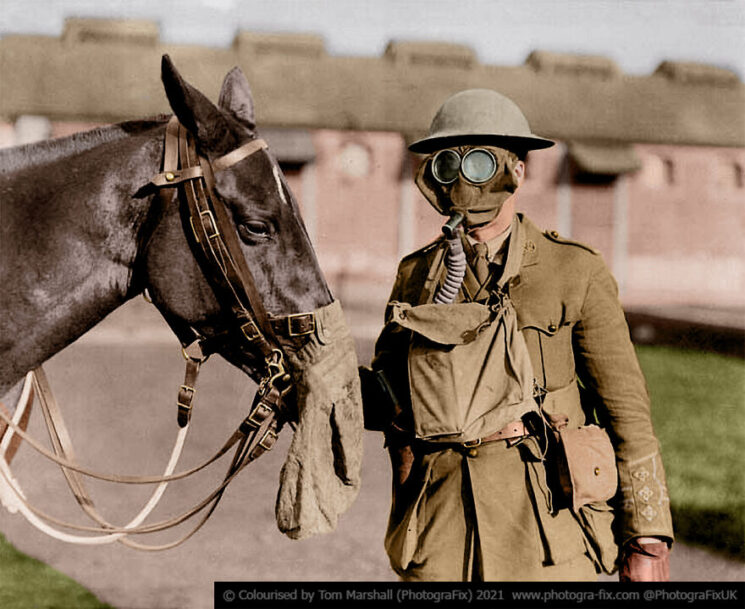 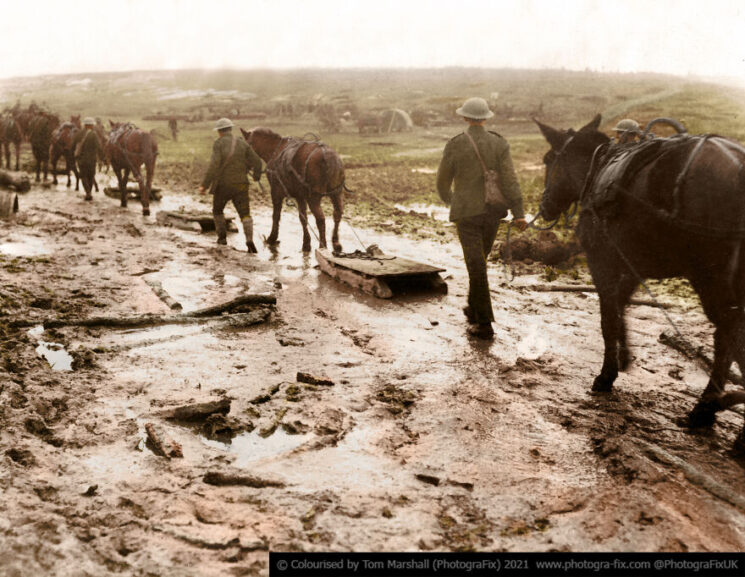 “Horses pull makeshift sleds through the mud of the First World War.” 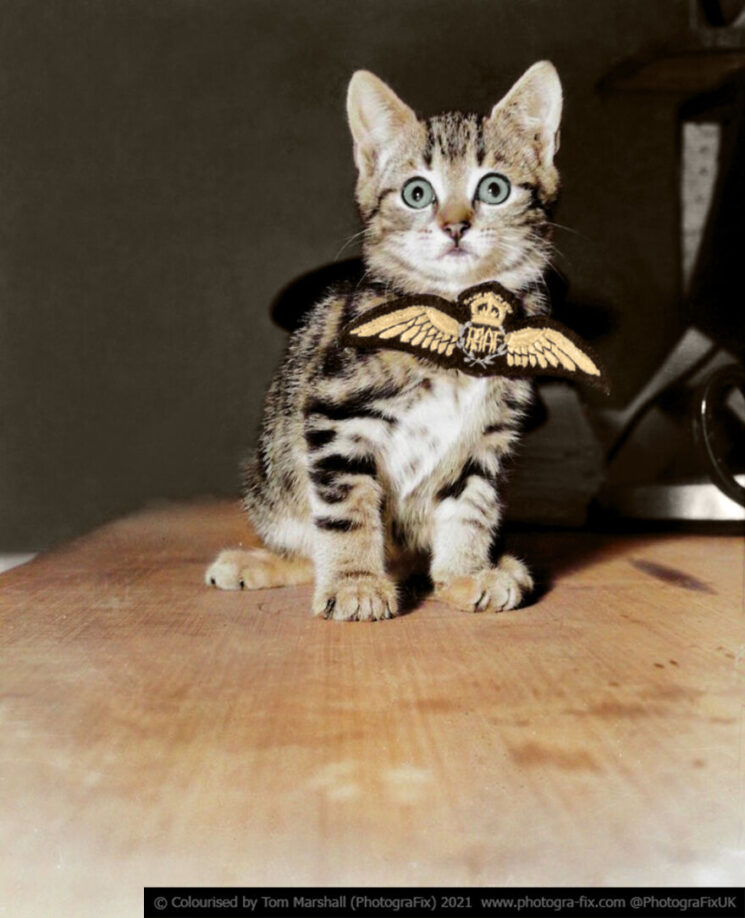 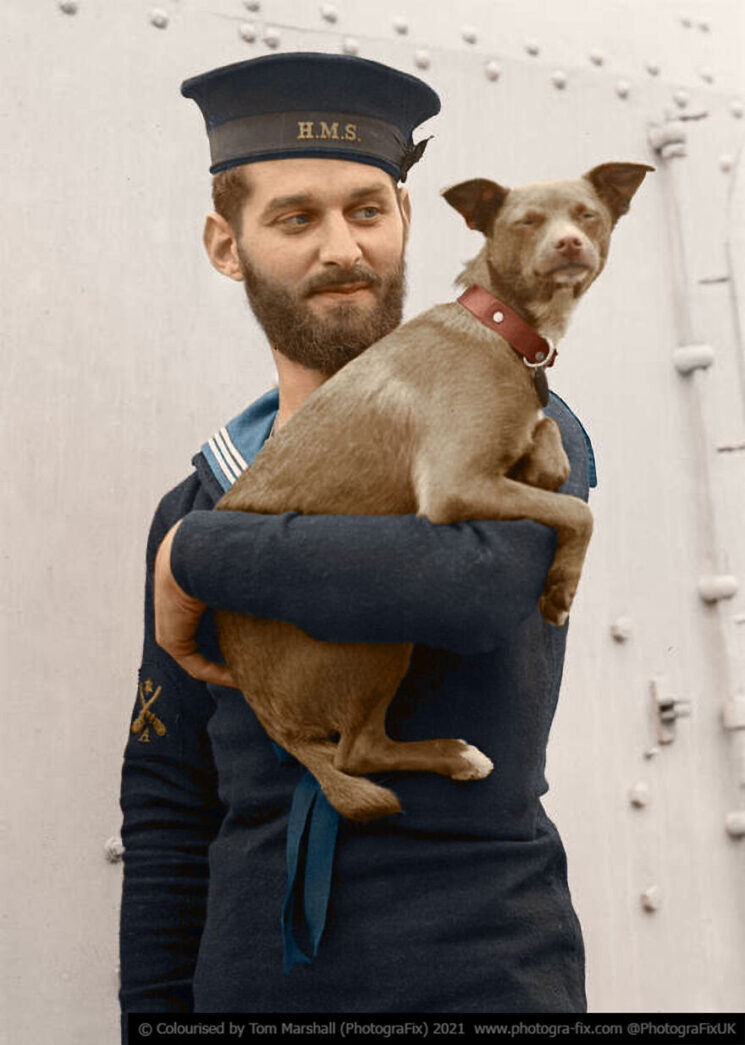 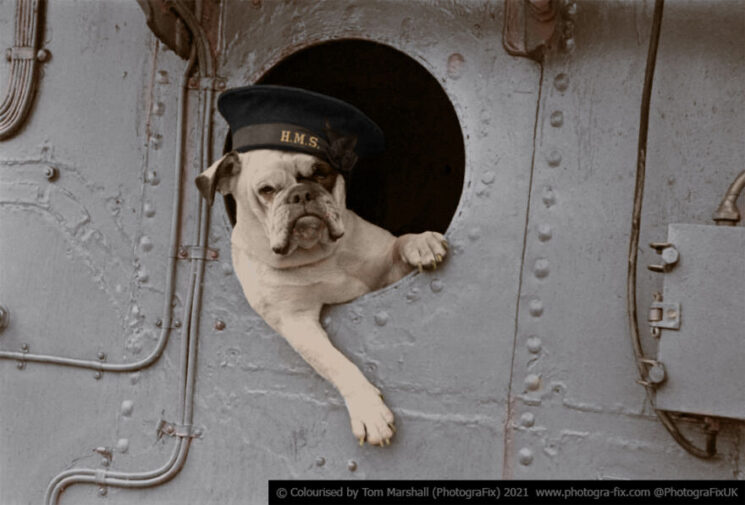 “Venus the bulldog mascot of the destroyer HMS Vansittart, 1941.” 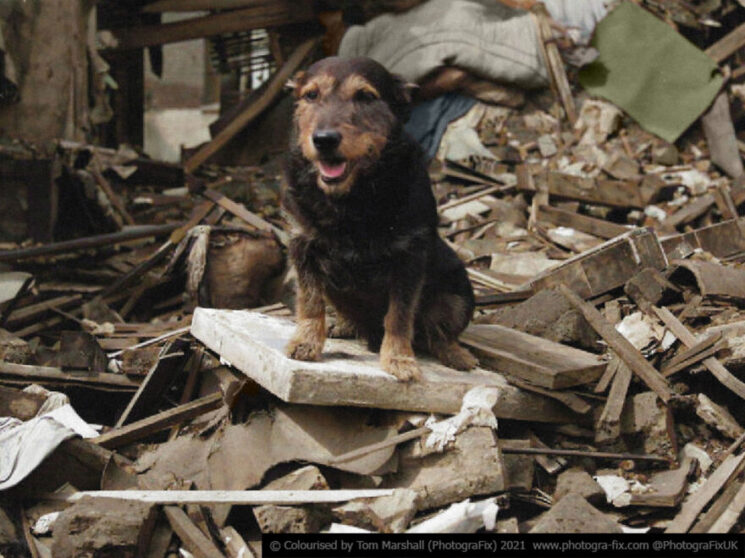 “Rip was a mixed breed terrier awarded the Dickin Medal for bravery in 1945. He was found as a stray in Poplar, London, in 1940 by an Air Raid Warden Mr. E King, and became the service’s first search and rescue dog. He is credited with saving the lives of over 100 people.
Rip was not trained for search and rescue work, but took to it instinctively and his success has been held partially responsible for prompting the authorities to train search and rescue dogs towards the end of World War II.” 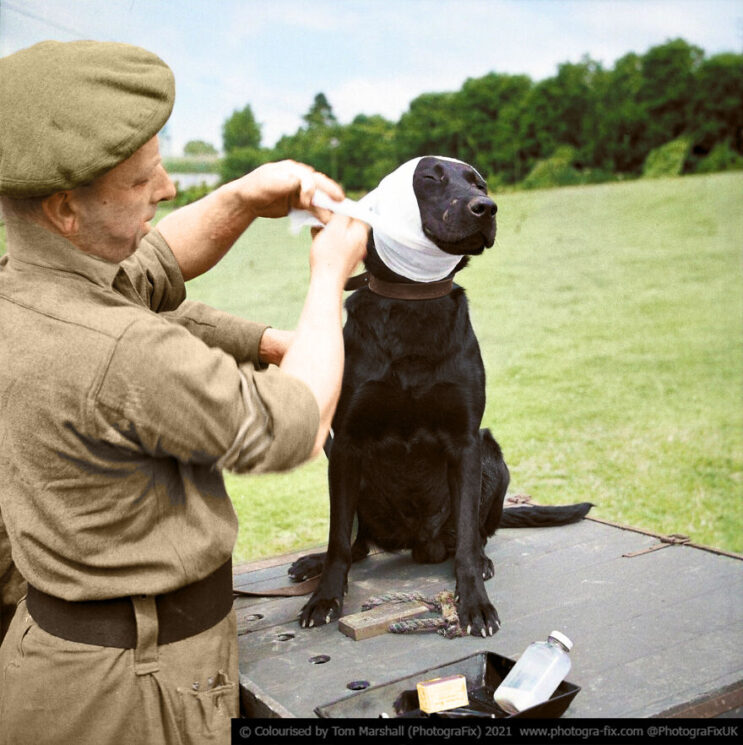 “A sergeant of the Royal Army Veterinary Corps bandages the wounded ear of ‘Jasper’, a mine-detecting dog at Bayeux in Normandy, 5th July 1944.” 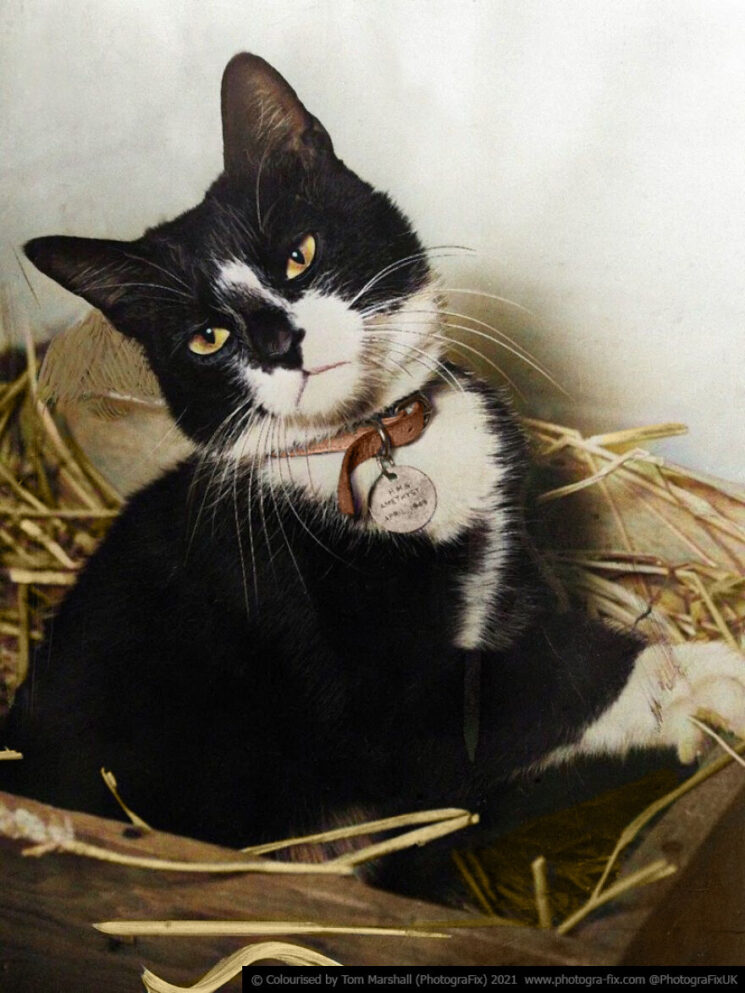 “Simon was a ship’s cat who served on the Royal Navy sloop-of-war HMS Amethyst. He was adept at catching and killing rats on the lower decks. Simon rapidly gained a reputation for cheekiness, leaving presents of dead rats in sailors’ beds, and sleeping in the captain’s cap.
In 1949, during the Yangtze Incident, he received the PDSA’s Dickin Medal after surviving injuries from a cannon shell which tore through the captain’s cabin seriously wounding Simon and killing the captain.
The badly wounded cat crawled onto deck, and was rushed to the medical bay, where the ship’s surviving medical staff cleaned his burns, and removed four pieces of shrapnel, but he was not expected to last the night.
He managed to survive, however, and after a period of recovery, returned to his former duties catching rats. He is still the only cat to have been awarded the Dickin Medal as of 2021.”

How Peter Jackson colorized WWI footage for his documentary

« NVIDIA’s GauGAN AI landscape generator can now create scenes from scratch from written descriptions
The largest digital camera ever built is being installed and its resolution is 3.2 BILLION pixels »