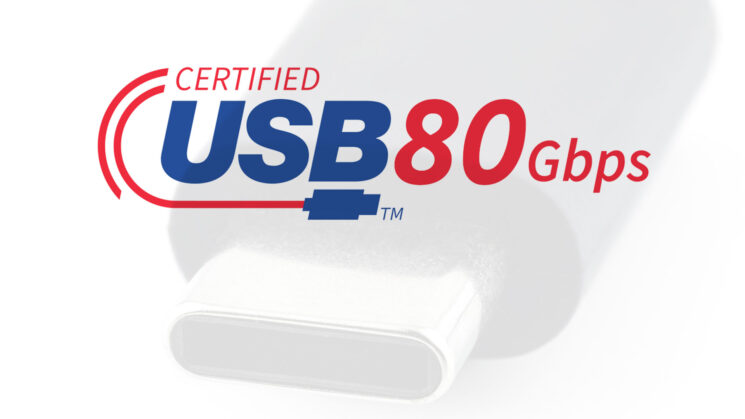 As seems to happen every couple of years, a new USB specification has been announced for us to adopt at some point in the future. USB 3.2 Gen 2×2 was announced in 2019 along with the whole renaming thing, and USB4 version 1.0 was announced later that same year. Now, we’ve got the USB4 V2.0 spec, and it’s quick!

The speeds have essentially doubled with each new generation since USB 3.2 Gen 1 (what was originally called USB 3.0). Gen 1 was 5Gbps, Gen 2 is 10Gbps. Gen 2×2 is 20Gbps. USB4 V1 is 40Gbps and now the USB4 V2 specification boasts up to 80Gbps transfer speeds. The USB Promoter Group has also announced that the new standard brings updates to data and display protocols to better utilise that bandwidth, too.

Once again following USB tradition, this updated USB4 specification doubles data performance to deliver higher levels of functionality to the USB Type-C ecosystem. Solutions seeing the most benefit from this speed enhancement include higher-performance displays, storage, and USB-based hubs and docks.

Updates come with USB4 V2.0 to enhance existing USB 3.2 DisplayPort and PCIe data tunnelling protocols to utilise the higher available bandwidth of USB4 V2.0 and that the 80Gbps speeds can be reached using existing USB3.2 40Gbps data cables, the USB Promotor Group has said. They also say that at the moment, the new specification is being targeted toward developers who are creating devices using the new tech.

80Gbps speeds does seem quite excessive for many of us, especially when even the fastest SSDs on the market can only manage a relatively slow 2.8GB/sec (or around 22.4Gbps). But the goal with USB4 V2.0 isn’t just faster file transfers. It’s to allow massive data transfer between devices. Like, the kind of bandwidth you’d need to come home from work with your laptop, plug it into a dock connected to a powerful GPU, a couple of big displays, massive storage and a bunch of other devices to turn it into a powerhouse desktop.

USB4 V1.0 has started to appear in a few devices, although not many, although it’s expected to start seeing more mass adoption before the year’s out with new laptop and motherboard releases. Exactly when we’ll see USB4 v2.0 is another matter entirely, but it wouldn’t surprise me if it’s going to be at least 2025 before it starts appearing in consumer devices.

USB4 is coming, with a Type-C connection and 40GB/sec bandwidth

« Nirvina Baby’s “child pornography” album cover lawsuit dismissed… again and for the last time
We are giving away over $12,000 of cinema gear »