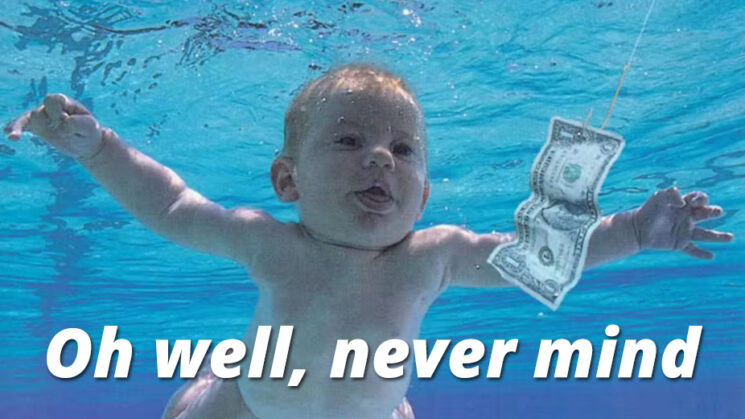 Spencer Elden has had his latest attempt at suing Nirvana over his claims of “sexual exploitation” dismissed in US District Court in Los Angeles. This is the third such time he’s attempted to sue the band, and this dismissal means there won’t be a fourth time. A previous claim was dismissed in January, as Elden’s legal team failed to file an opposition to a Nirvana estate request. A new deadline was set, the appropriate paperwork was seemingly submitted and it came before the court.

The case stems from the use of a photo of Elden shot in 1991, aged four months old, naked, swimming and used as the cover for Nirvana’s arguably iconic album, Nevermind. He claimed he was unable to give his permission at that time (being only 4 months old) and that it was “sexual exploitation” and “child pornography”. The judge disagreed.

The dismissal seems to stem from a number of factors. First is the fact that Elden himself has recreated the image a number of times over the years, and appeared to actively use the infamy of being the “Nirvana baby” to his advantage. But the Judge also ruled that he’d taken far too long to actually do anything about it, having sued more than 10 years after learning about the album cover.

Defendants in the case included surviving Nirvana members, Dave Grohl and Krist Novoselic, Kurt Cobain’s widow Courtney Love, several record labels and the photographer who shot the image, Kirk Weddle. Elden’s father was a friend of Weddle, and apparently made $200 from the 15-second shoot, according to an interview with NPR in 2008.

Elden appears to have struggled to fully come to terms with his image on the cover, although he doesn’t exactly hidden from it, either. In 2003, at the age of 12, Elden was quoted in Rolling Stone magazine saying that he was “probably gonna get some money from it” and has recreated the image several times including for the 15th and 25th anniversaries of the album’s release. In his suit, however, he claimed that despite the statute of limitations being up, he met them because of emotional distress, lost earning capacity and “loss of enjoyment of life” continuing into adulthood.

Ultimately, though, Judge Fernando Olguin at the LA District Court rejected that argument, saying that it would basically allow Elden to keep suing the band forever. In his final ruling, he wrote:

In sum, plaintiff fails to allege that he knew of a violation that occurred while he was a minor or an injury that forms the basis of the claim within ten years of filing this action.

This is the third version of Elden’s complaint has been shot down and this dismissal prevents there from being a fourth. Lawyer for the defendants, Bert Deixler said that “we are pleased this meritless case has been brought to a speedy final conclusion”.

So, it looks like this one has finally been put to rest.

« The new Irix 21mm and why this changes EVERYTHING
The USB4 V2.0 specification has been announced offering 80Gbps transfer speeds »