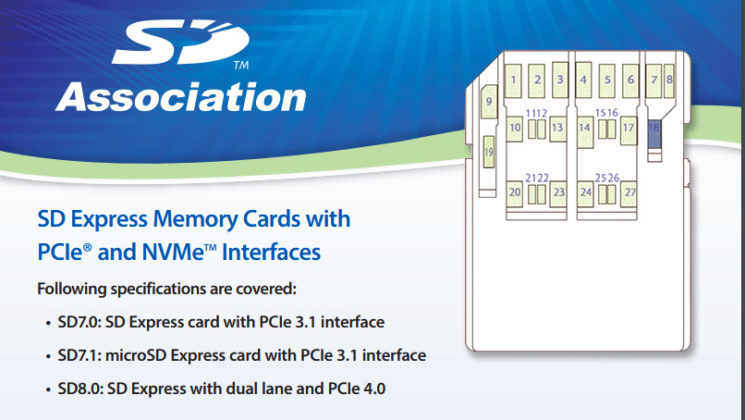 Just when you think memory card speed limits are being hit, along comes the SD association to prove you wrong. This time, they’re announcing the SD Express 8.0 (SD8.0) specification which comes with transfer speeds of up to 4GB/sec (2GB/sec per lane up to two lanes). It’s built on the PCIe 4.0 standard and utilises NVM Express (NVMe) storage.

The first SD Express standard (SD7.0) was unveiled in 2018, offering transfer speeds of up to 985MB/sec, but it’s already been obsoleted by SD8.0. And the world hasn’t even adopted the SD6.0 UHS-III specification yet, either. 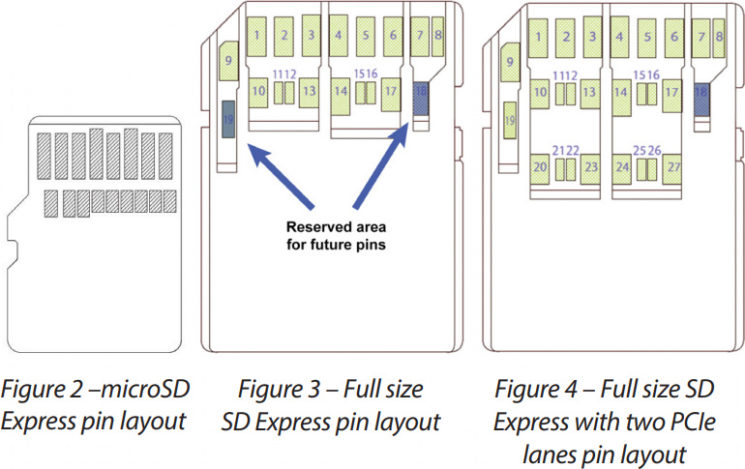 The SD8.0 spec follows along the lines of the SD7.0 spec, but utilising PCIe 4.0 instead of PCIe 3.0, for double the speeds. The single-lane cards will have a similar pin layout as existing UHS-II cards, for transfer speeds of up to 2GB/sec. The assignment for each pin, however, is different to UHS-II, so you won’t get the kind of speeds you’re used to when you put your UHS-II card into an SD Express device. It’ll be limited to a lowly 104MB/sec – the same speeds you get now putting a UHS-II card into a UHS-I device. The dual-lane cards will offer twice the bandwidth, up to 4GB/sec, and have an extra row of pins for that second channel.

The same also holds true using an SD Express card in your UHS-II device. This combination will also slow down the speed of communication between them to 104MB/sec – much lower than either protocol is capable of handling. Similar rules will hold true with the SD7.0 and SD8.0 SD Express cards, too. “Figure 12” mentioned above is this chart…

According to the announcement, the demand isn’t driven by just photo and video content, although they do specifically mention 8K video capture and playback as well as 360° cameras and video. But the biggest demand seems to be coming from mobile devices, gaming systems, the automotive industry and IoT devices.

The dual-channel SD7.0 spec already rivalled CFexpress, which has replaced both XQD and CFast 2.0. Now, the SD8.0 spec looks like it’ll blow it away. At least, until CFexpress 2.0 comes along, which should match those 4GB/sec speeds. Beyond that, if and when CFexpress switches from PCIe 3.0 to PCIe 4.0… Well, that’s when things will start getting really fast.

The way things are going, companies might skip UHS-III entirely!

You can see the complete announcement from the SDA here and the SD8.0 white paper here.