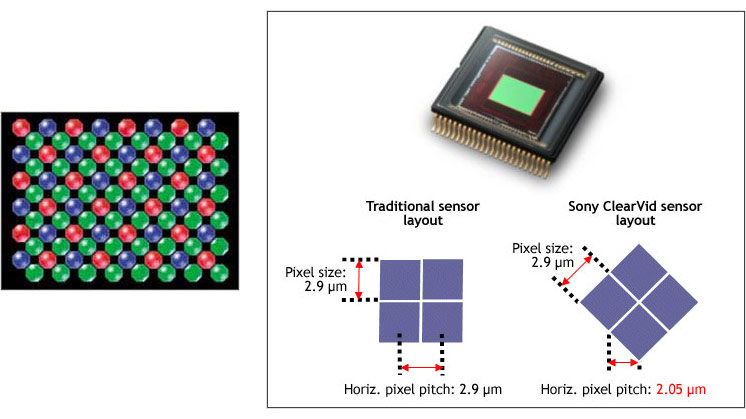 The Sigma fp L was thought to have been getting announced at CP+ last month, but it turned out to not be the case. Instead, we just saw the new 28-70mm f/2.8 DG DN Contemporary lens for Leica L and Sony FE mounts. Now, though, a Tweet from Nokishita suggests that an fp L announcement is imminent. They say that an article with the title “SIGMA fp L First Impressions” has been added to a site that has previously reviewed the 28-70mm mentioned above.

L-Rumors, though, has heard another rumour from a couple of sources suggesting that the Sigma fp L will see a very weird looking sensor. It’s not a Foveon X3 sensor, as it still shows individual photosites for each of the red, green and blue pixels instead of stacking them on top of each other for every pixel. But it looks very much like the old Fuji Super CCD HR sensor from their DSLR days.

The new sensor is said to be a new Sony sensor, named IMX513BQR with an “effective 60.75 megapixels” resolution that has a 30-megapixel mode which is allegedly the same quality you’d expect from a Foveon X3 sensor. Except, with presumably the benefits of a more traditional CMOS sensor – like decent ISO performance and speeds capable of more than a couple of frames per second.

About the rumoured sensor, the L-Rumors source says…

This special pixel array was name as “Q67” or “ClearVid” in sony’s speech, was used in F65RS cine camera.

This 61 megapixels zig-zag pixel sensor can output 30 megapixels green channel image without any interpolation and color the picture like the Foveon X3 Quattro. So it can be the flat version of Foveon X3, but save the high ISO.

In additionally, this customized sensor use the same color filter as the PhaseONE IQ3 100MP Trichromatic. It has the best color reproduction even better than the old Foveon X3.

Nokishita has also said that a number of accessories – presumably for the fp L – have been added to Sigma’s accessories list.

When I found out that Sigma was set to release another non-Foveon body, I was prepared to be somewhat disappointed. But if the rumour of this sensor turns out to be true, then it’s pretty intriguing. So, it will be interesting to see if the fp L does contain such a sensor and I’d really like to see it for myself at some point, particularly its video capabilities.

Sigma is working on a Foveon sensor for video use

« How to shoot easy white backgrounds for either products or portraits
Leica wants to kick off your street photography with new $1,549 camera kit »