Most iconic photos have a story behind them. Some of them have secrets that come to the light of day years after they were taken. Marc Silber of Advancing Your Photography teamed up with Dotan Saguy to bring you this interesting story about one of the most iconic photos of the 20th century. It’s Henri Cartier-Bresson’s Behind Gare Saint Lazare, and Dotan reveals its secret that many of us didn’t know.

Behind Gare Saint Lazare was taken in 1932, in the early years of Cartier-Bresson’s career. It became so iconic that TIME Magazine proclaimed it one of the 100 most influential photos of all time. But as it turns out, this photo we all know was taken more or less by accident.

Dotan first tried to find contact sheets of the photo. However, they were all destroyed, so he dug deeper. he found out that the place where the photo was taken was turned into a construction site when Cartier-Bresson photographed it. He used a Leica 1A, which has no rangefinder. Therefore, he could only guess how far the subject was, or he could rely on zone focusing, which is probably what he did. This means that his aperture had to be relatively small, around f/8.

Now, the films at the time were very slow for today’s standards, around ISO 25 or ISO 32. So, if Cartier-Bresson shot at f/8, he probably had to use a slower shutter speed. This is why there’s a slight motion blur on the person leaping. Cartier-Bresson must have had a very steady hand, or maybe used a fence to stabilize the camera.

In an interview he gave two years before his death, Cartier-Bresson explained that his lens was squeezed between two planks. Since the camera was held vertically, one of the planks had to be obstructing the viewfinder. In other words, he couldn’t see the scene through the viewfinder and wait for the perfect moment to capture it. He could only see it through the hole in the fence, but he couldn’t frame the shot. In fact, Cartier-Bresson said in the same interview that he hadn’t even known about the man leaping when he took the photo.

“It was just luck then?” the interviewer asked him. “It’s always luck, nothing else,” Cartier-Bresson responded. However, it would be neither fair nor true to say that it was pure luck or pure genius on the other hand. When you look at Cartier-Bresson’s other work, it’s clear that it’s also magnificent, so it was more than just luck. Also, he was familiar with his equipment and composition techniques, so he sure knew what he was doing when taking his photos.

I absolutely love Henri Cartier-Bresson’s work. I remember seeing an exhibition of his photos in Stockholm some seven years ago, and I can still recall the feelings and impressions that I had back then. So, I really enjoyed hearing the story of one of his most famous images. Just like Dotan, I don’t think it was pure luck, coincidence, or genius: but maybe a little bit of everything. All in all, I found it interesting and I definitely learned something new today. 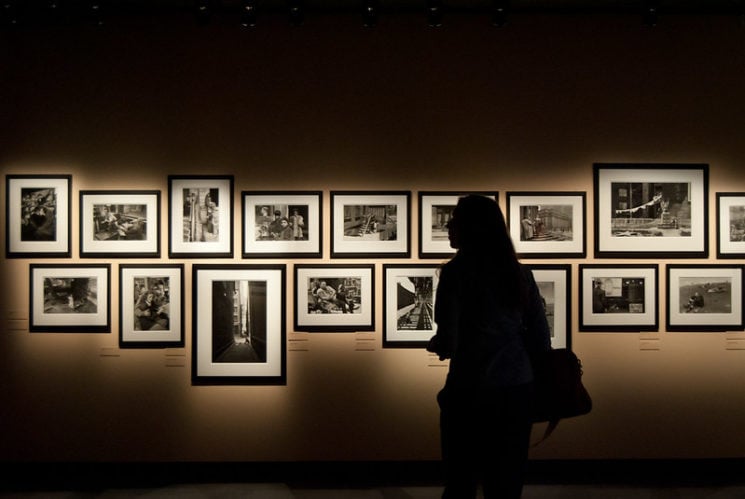 Detail from Henri Cartier-Bresson’s exhibition in Stockholm, May 2013

[The Shocking Secret Behind the Iconic Photograph of Henri Cartier-Bresson feat. Dotan Saguy | Advancing Your Photography]

If Sharpness Truly Mattered Cartier-Bresson Would Be a Joke