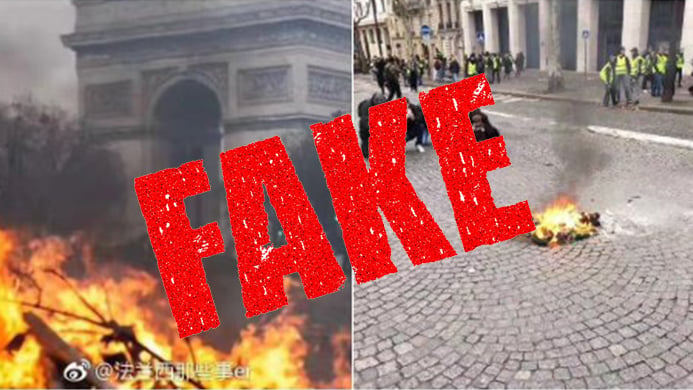 A few days ago, a photo “debunking” protest fires in Paris appeared on Twitter and it quickly went viral. It shows two images side-by-side “proving” that the fire was actually harmless, but only shot from a low angle so it appears huge. However, when this “fact checker” was fact checked, it turned out that it was actually fake: reportedly , the two photos weren’t only taken on different days, but also in different parts of the city.

The photos placed side-by-side were tweeter by various users, with comments like “perspective matters.” Apparently, they were suggesting that the photographers shot a small fire from such a perspective that it seems much bigger than it is, and the “debunker” diptych got retweeted tens of thousands of times.

However, AFP then posted a thread to prove that the “debunker” image is the one that needs to be debunked. They report that the first image was taken on 1 December 2018 by Katerine Pierre, a photographer for Hans Lucas agency. The second one was taken on 8 December by a staff photographer at French magazine Le Point, who posted it on Twitter. It’s not only the dates, but the places differ, too. The second image was taken “exactly on the other side of the Arc de Triomphe, on Foch Avenue,” AFP writes.

Gizmodo points out that it’s not clear who was the first to juxtapose these two images, and what the intention was. But they sure spread like forest fire (no pun intended, really). But AFP had debunked the “debunker” and gave a thorough rundown on both images. While the Yellow Vest protests in Paris are real news, we should still take both the photos and the “debunkers” with a grain of salt.

Students hang a huge fake ad of themselves in McDonald’s to protest against Asian ad discrimination. It’s still there 51 days later