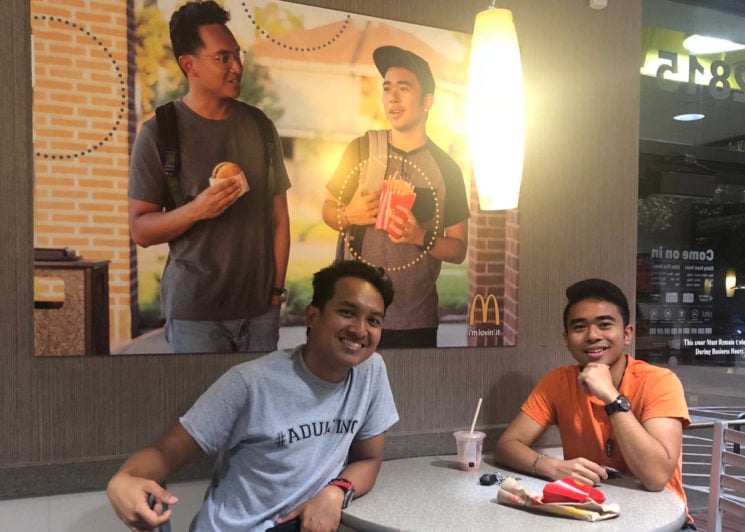 One day at a McDonald’s restaurant, Jevh Maravilla was sitting with his friend and noticed that there were no Asian in any of the ad posters. At the same time, he saw a blank wall and had a crazy idea: what if they put a photo of themselves up there? The idea soon became reality, and the guys managed to hang a professional-looking poster with them as the models. And the funny thing is – no one noticed anything unusual for almost two months.

Ina hilarious video, Jevh shares how they did it, from planning the shoot to hanging it on the McDonald’s wall. And I must say it’s some high-quality trolling.

First, the guys needed to plan how and where to take the photo. Since all the other posters were taken in natural environments, so they decided to be students. They took the photo in front of a neighborhood event center because there were a lot of people in front of the school for some reason. In the evening the same day, they edited the photo so it has the style of other McDonald’s posters and they purchased it via Office Depot website. A week later, it was in their hands and ready to be hanged on the restaurant wall.

But how did they do it without getting noticed? Well, the guys thought this through as well. They found a McDonald’s shirt at a thrift store for $7. With a walkie-talkie, a badge and a tie, no one suspected that Jevh wasn’t really a “regional interior coordinator” at the restaurant.

On the big day, the guys and a couple more friends went to the restaurant with the poster. They waited until the coast was clear from the actual employees before Jevh took off his jacket and transformed into one of them. He directed his friends to hang the poster, and voila – it was there. And it has been ever since.

i noticed there was a blank wall at mcdonald’s so i decided to make this fake poster of me and my friend. It’s now been 51 days since i hung it up. pic.twitter.com/5OTf5aR4vm

I find the idea and the whole plan hilarious and ingenious at the same time. They had a message in mind and surely sent it, yet they had fun and amused us as well. Since Jevh’s project has gone viral, I believe that the restaurant’s employees have noticed the poster by now. McDonald’s didn’t give a comment, but I do hope that will poster will stay up. Not just because it represents the Asian race, but because the whole project behind putting it up there was so freakin’ amusing to watch. : )

Macphun arming themselves for the war against “Lightroom Classic”

How I sprayed powder on people for a McDonalds campaign