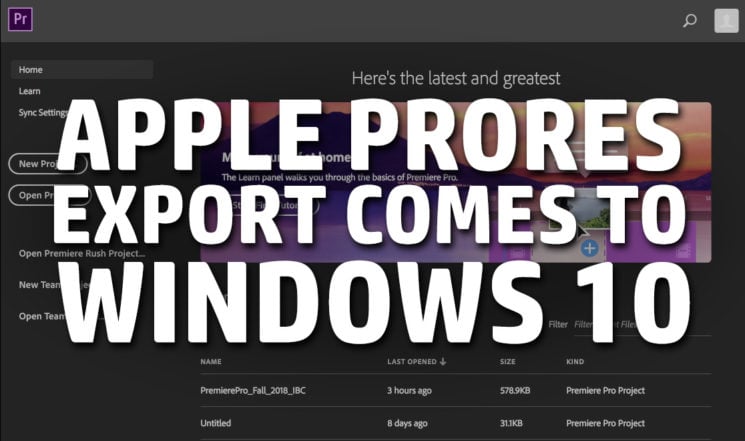 It comes as part of the new 13.0.2 update for Premiere Pro CC, along with HEIF import for files created on iOS devices and ProRes HDR import. It also offers improved performance with Canon Cinema RAW Light on multicore processors.

ProRes has been one of the biggest issues for Adobe Premiere Pro users on Windows for as far back as I can remember. While Premiere Pro has had support to read Apple ProRes files for quite a while now, it’s never had the ability to export them.

This means if you’re working with clients that absolutely demand ProRes throughout the process, and you can’t convince them to use Avid DNxHD/DNxHR codecs, then somebody with a Mac may be more likely to get the job over you.

There have been some workarounds, using Blackmagic Fusion for example, and various unofficial and unlicensed 3rd party solutions (that typically ended up disappearing as Apple caught wind). But it was a bit of a pain to have to roundtrip things and resort to hacks just to be able to render out ProRes footage.

All that has changed now, though, with the new Premiere Pro CC 13.0.2 update.

This will make workflows much easier, and it means that you’ll see very little loss in quality (if any noticeable loss) when chopping up those long pieces of footage into smaller clips to be able to delete the waste. Not to mention roundtrips to DaVinci Resolve for grading, or working in multi-platform teams.

As well as Premiere Pro, the update adds ProRes 4444 and ProRes 422 export support to After Effects and Media Encoder, too, for both macOS and Windows 10. Import support has also been added for ProRes HDR, and iOS HEIF files.

The update also brings a whole lot of bug fixes, too, which you can read about here. But for a lot of folks, it’s ProRes export support that’s going to really make them go “Wait, what? NO WAY!”