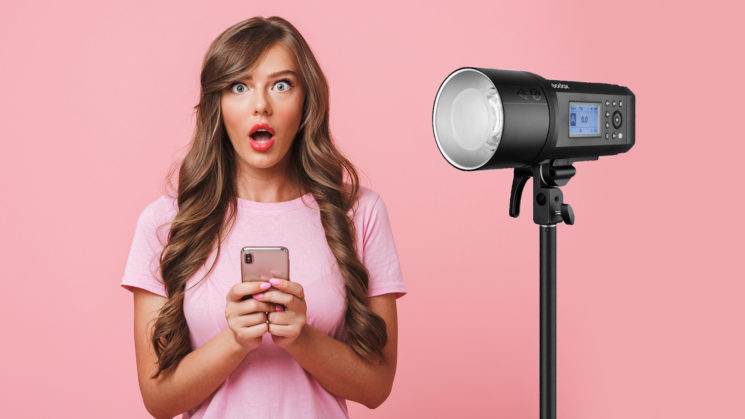 Although not common, flash support is something that quite a few people have been asking for with smartphones. Nobody’s seriously looking to replace their DSLRs and mirrorless cameras with phones, but being able to fire your strobes from your phone can be handy for things like behind the scenes shots.

According to 9to5Mac, though, new specs shared with manufacturers on Apple’s Made-for-iPhone (MFi) licensing programme show that the iPhone 11 may soon support for some degree of native 3rd party flash support.

They say that the new specs will “allow an accessory’s strobe or lighting component to sync with the device’s integrated flash and also relay the strobe sync signal wirelessly to additional accessories”.

Essentially, this means that accessories would plug into the iPhone’s lightning socket in order to communicate with the phone – similar to plugging a trigger into your camera with a sync cable – which would then fire your strobes.

Firing strobes with your phone, particularly the iPhone, isn’t a new idea. Tric offered this a few years ago back in the days of the iPhone 6. And then there’s the Godox A1, released in 2017, which offers control over your Godox strobes and speedlights with the ability to shoot photos using flash on your iPhone or certain Android phones. But such devices all connect through Bluetooth and you are limited to using the app supplied by the product manufacturer in order to utilise them.

What’s suggested this time around by 9to5Mac is a native standardised protocol that 3rd party gear manufacturers are all able to tie into and can communicate via the lightning port. This could theoretically allow the use of the flash device with the default camera app on your iPhone and possibly many third-party apps. It also means that you may be able to get flash with shutter speeds faster than 1/30th of a second, due to the lower latency and more precise timing of the lightning port vs Bluetooth.

Currently, strobe support is available as a developer preview for Apple’s MFi programme, and only supports the iPhone 11, iPhone 11 Pro and iPhone 11 Max. They say that the specs aren’t final yet, but the preliminary specs are allowing manufacturers to develop and prepare compatible hardware. As part of the developer preview, they’re not allowed to release their licensed MFi products yet.

There’s no word on how soon this support will come to the iPhone 11 or exactly what devices we might see or the final capabilities, but we’ll let you know when we hear something a little more solid.

I wonder if we’ll see a Godox A2 coming at some point soon? If we do, hopefully, they’ll find a way to make it support more Android devices than the A1 does.

« When you buy these African lens pouches, you support a mother in a developing country
Watch the delicate process of preserving a 200-year-old daguerreotype »