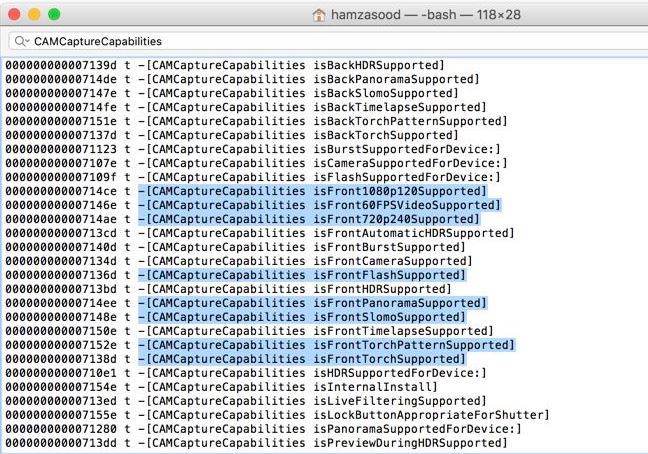 Rumors have been stating that the iPhone 7’s camera might offer DSLR-like performance, and they gained momentum a couple of months ago when Apple purchased LinX, an Israeli camera-tech company focusing on computational imaging.

While we have yet to have seen any solid evidence that DSLR owners will soon be able to stop lugging their cameras around, code found in the developer’s Beta version of iOS 9 reveals that quite a lot of work has been focused on improving the device’s front-facing camera.

The relevant code, shared on Twitter by developer Hamza Sood, is presumed to be incorporated in the next iteration of the iPhone and could finally bring some much anticipated features.

For the first time in the iPhone’s history the front camera could finally be accompanied by a flash. Other features currently only available for the back camera, such as slow motion (at 240fps @ 720p) and panoramic selfies, should also find their way to the front of the camera.

Improving the 720p video found in the iPhone 6 and iPhone 6 Plus front cameras, the code also suggests that FaceTime users will soon be able to record themselves in 1080p.

Another popular rumor about the next iPhone’s camera, though not covered in the code shared by Hamza, is that the back camera will be upgraded from 8MP to 12MP.

« Weather Sealed Lens With a Fly Inside
Enrapturing Portraits Explore The Athelticism, Strength, And Form Of Dancers »