The demands placed on portable storage are higher now than they ever were, especially for creatives working in photo and video. We need larger capacities and faster speeds to be able to keep up with those huge raw files and 4K and larger footage. Glyph’s new Atom Pro SSD claims to be the fastest portable SSD out there, offering sustained read and write speeds of 2,800MB/sec and 2,600MB/sec respectively.

We caught up with Glyph at IBC 2019 to find out more about the Atom Pro, and some of the other storage products they were showing off.

The Glyph Atom Pro is an external NVMe SSD running connected through Thunderbolt 3. It boasts sustained read and write speeds of 2,800MB/sec and 2,600MB/sec respectively, which is extremely impressive. There are a couple of drives on the market that state similar read speeds, but not necessarily sustained. These speeds are right at the limits of Thunderbolt 3’s technology, so it’s about as fast as SSDs can go at the moment.

They’re designed specifically to handle power user demands, like 4K, 8K and VR editing workflows. They’re rated to MIL-Standard 810F for shock, vibration, dust and sandproofing. These drives are a mere 3.1″ x 5.2″ x 0.7″ in size and are compatible with both Windows and Mac.

Glyph was also showing off their range of Atom Raid SSD. These aren’t quite as fast as the Atom Pro, although they offer double the speed of traditional SSDs due to the fact that they have two drives inside them running in Hardware RAID 0. They are available in capacities up to 4TB offering read and write speeds of up to 950MB/sec. 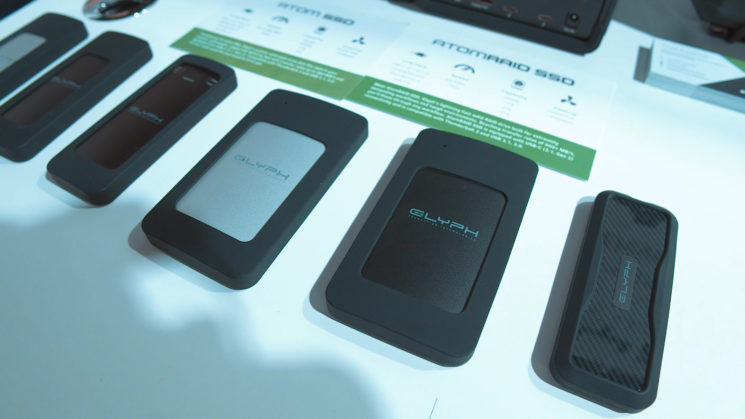 The Glyph Atom Raid SSD is available to buy now in 1TB, 2TB and 4TB flavours ranging from around $250 up to $750. We’ll have a complete review of the Atom Raid SSD coming soon to DIYP, so keep an eye out for that!

These weren’t all that Glyph brought to IBC 2019. We also got to take a look at the new Blackbox Pro RAID units coming later in the year. There are two types, but the one that was particularly interesting is the mobile version. These can come configured with regular mechanical HDDs up to 10TB or with SSDs you can go up to 15TB total storage. 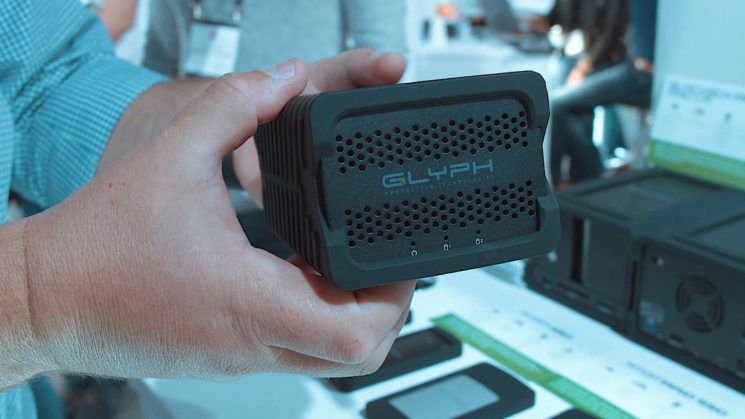 There’s no word on prices for these yet, but we’ll keep you posted when we hear more.

Finally, there’s a new tiny portable SSD. It’s also based on NVMe, with a 10GB/sec USB3.1 Gen2 connection. It’s similar to the Atom Raid SSD, except there’s only a single drive inside, not a pair of them. This one’s only going to be available in sizes up to 2TB, and  should be coming soon.

The Glyph Atom Raid is not an SSD, it’s a Rocket!