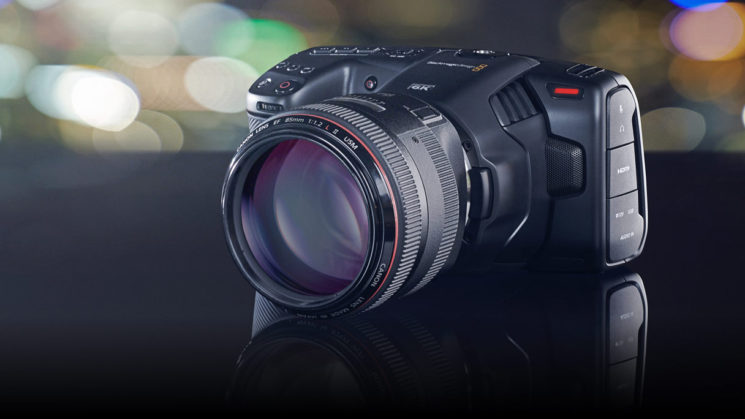 It shares much in common with its 4K sibling, including a rather low budget price of only $2,499 (£2,025 in the UK). Only this one comes with a Super 35mm sensor and a Canon EF Mount with full electronics.

The camera was just launched via the live stream update embedded above. The bit with the new camera starts at around 45 minutes into the video, after talking about some Blackmagic Cinema Camera history, and feedback they’ve received since the Pocket 4K hit the streets. From the outside, the two cameras look very similar, except of course for the larger sensor and lens opening, and the lens mount being a little further from the sensor.

Blackmagic stresses that the Pocket 6K is not a replacement or an upgrade for the Pocket 4K. It’s just another member of the Pocket family, and both cameras will sell concurrently. The Pocket 4K will likely remain at its current pricing, although I suspect we might start to see demand dying down a little now, and a few more popping up on the used market as some decide to go for the Pocket 6K instead, because that price is very attractive.

When you consider that a Pocket 4K and Metabones EF Speed Booster is going to bring you close to $2K anyway, it’s only an extra $500 to go up from 4K to 6K resolution, and you still get that 60 frames per second framerate, making it an even better deal. But you’ll probably spend more on storage. The Pocket 6K does make quite a dent, with files taking up around double that of the Pocket 4K for the same duration and frame rate.

The stills resolution has also gone up. Of course, not many will be shooting stills with a Pocket, the Pocket 6K shoots 21.2-megapixel photos, compared to the Pocket 4K’s 8-megapixel stills. And as with the Pocket 4K, stills from the Pocket 6K are saved as uncompressed DNG.

It’s powered by the same Canon LP-E6 batteries as the Pocket 4K, and can also charge batteries via the Type-C USB. And there’s an AC adapter, offering mains power when you have access to plug sockets.

The Blackmagic Pocket Cinema Camera 6K is available to pre-order now for $2,495 and is apparently expected to start shipping in less than a week. You can find out more about it on the Blackmagic website.

« Corel PaintShop Pro gets a 2020 update with “intelligent” editing tools for photographers
Want to be blocked on Twitter by Elon Musk? Just call him out on copyright infringement »