Samsung has announced the Galaxy Note10 and Galaxy Note10+ smartphones. Yes, that’s right, there are two of them. The Galaxy Note has previously stood alone as Samsung’s flagship mobile device. But now the standard Note10 is taking a back seat to the “Plus” variety. And there are some quite noticeable differences between the two.

From a smartphone photography standpoint, the good news is that both models contain mostly the same cameras. The Note10 has a triple camera array featuring ultra-wide, wide and telephoto lenses. The Note10+ contains these same three cameras but also includes an additional DepthVision camera – which offers more advantages than just photography.

So, let’s have a quick look at some of the key side-by-side differences between the two models when it comes to photography.

So the screen is one of the most obvious differences between the two. The larger and higher resolution display means that you’re going to be able to see much more detail while you’re shooting photos and video, and the app UI in your preferred photo and video apps won’t need to take up as much of the screen. But it also means that if you use your smartphone as a pocket portfolio device, your images are going to look just that bit better on the Note10+ rather than the standard Note10. 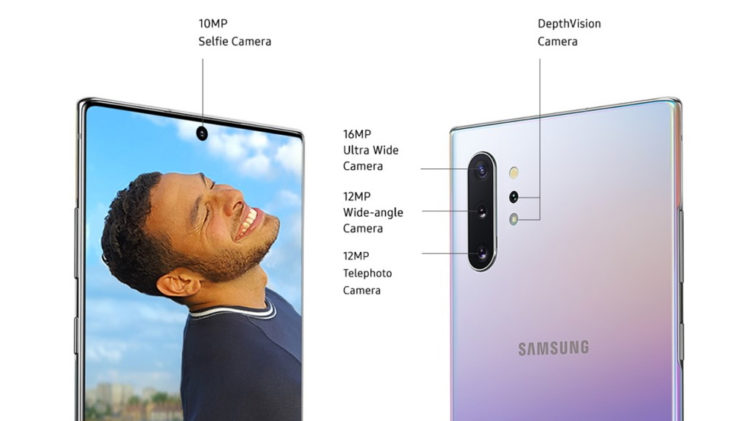 The Note10+ also features the DepthVision VGA camera on the rear side. This is more for augmented reality than photography, but it also allows Note10+ users to 3D scan objects in their environment. These objects can then be animated or exported out for 3D printing – I can see that becoming quite popular.

For selfies, the GalaxyNote10 and Note10+ both feature Night Mode on the front camera, allowing you to shoot better selfies in lower light conditions.

When it comes to video, not much has been mentioned on the Samsung website with regard to specs, but I think it’s a pretty safe bet that both will record 4K UHD video, probably at 60fps, as well as 1080p at increased frame rates for some slow-motion action. Exactly what those frame rates will be is anybody’s guess, but I think we can expect them to be at least as good as the Samsung Galaxy S10.

One thing they have mentioned though is a new “Zoom-in Mic”, which Samsung says “amplifies the audio in frame and pushes background noise aside to help focus on the sounds that you want”. Beyond much, there’s not much info on this yet. If you’d planned to shoot video with an external mic like the Rode VideoMic Me or Rode smartLav+, then you’ll have to think again as they’ve removed the headphone jack.

The Galaxy Note10 also comes with a new Video Editor app, which is compatible with the S Pen for more precise control. Samsung also says that it’s compatible with Adobe Rush, although the Adobe Rush page on the Play Store does not yet list compatibility with the Note10 – nor does it list compatibility yet for many other high-end smartphone models that are already on the market, like the OnePlus 7 Pro.

Other handy features include an IP68 rating for water and dust resistance. This means that it can withstand dust, dirt and sand and is resistant to submersion in water to a depth of 1.5 metres for up to half an hour.

No sample images shot with either phone seem to have been released yet, but I imagine it won’t be long before they start appearing.

« The business of photography is always a constant hustle
The ultimate torture test of Sony Tough SD cards: how much can they really stand? »