I first saw the DigitalFoto Ares 4th axis stabiliser a little while ago, but I really wanted to see one in person to see how well it performed. When we found out DigitalFoto were going to be at IBC 2019, we decided to pay them a visit so we could take a look. They also had something new with them, too, the Thanos Pro stabiliser kit, which includes a vest and arm system for stabilising those really heavy camera rigs.

The Ares 4th axis stabiliser is essentially a dual handle grip for your gimbal with built-in suspension. Officially, it’s compatible with the Zhiyun Crane 2 and DJI Ronin-S gimbals, although it may fit other gimbals that are out there on the market, too, as it uses a clamp mechanism to attach itself to the gimbal handle and should accept anything with a 40-46mm diameter. An adapter plate is also available for slimmer gimbal handles. 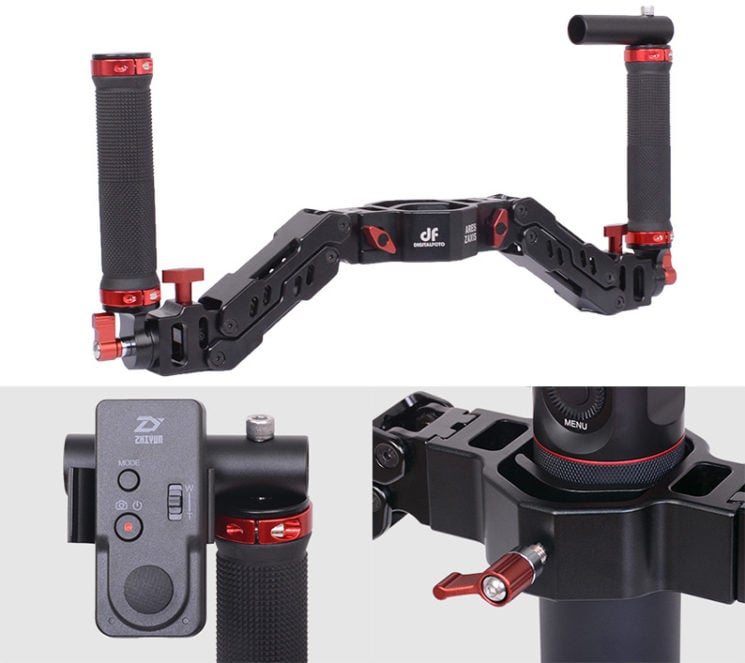 There are 1/4-20″ sockets on the top of each arm, allowing you to attach monitors or other devices, and a small bar is supplied so that you can attach your Zhiyun or another system remote for easy access when filming. The suspension system has a load capacity of up to 5kg. That includes the weight of the gimbal. But if you’re using something like a Crane 2, which weighs 1.25kg and has a load capacity of 3.2kg, then you’re well under this limit.

During my brief play with the Ares on the DigitalFoto stand, it seemed to perform quite well, although, with a system like this, you will need to tweak the spring adjustments depending on the type of footage you’re shooting. If you’re walking you’ll want to set them at a certain strength. If you’re running, you’ll definitely want to adjust it to a different strength setting, or it might end up having the opposite of the desired effect. This is just the nature of this type of 4th axis stabiliser and is not unique to the Ares.

The DigitalFoto Ares 4th axis stabiliser is available to buy now for $178.

As well as the Ares, we also got to see the new Thanos Pro stabiliser system. It was developed in response to user feedback from the original Thanos system. This is definitely more of a heavy-duty deal. The whole kit includes a vest, an arm which attaches to the vest, and then a collar which attaches to the arm. The camera mounts to the collar via your gimbal. Yokes are included to attach the Zhiyun Crane 2 or DJI Ronin-S gimbals, along with a base to add some weights for balancing a strap and hex keys in a soft case. 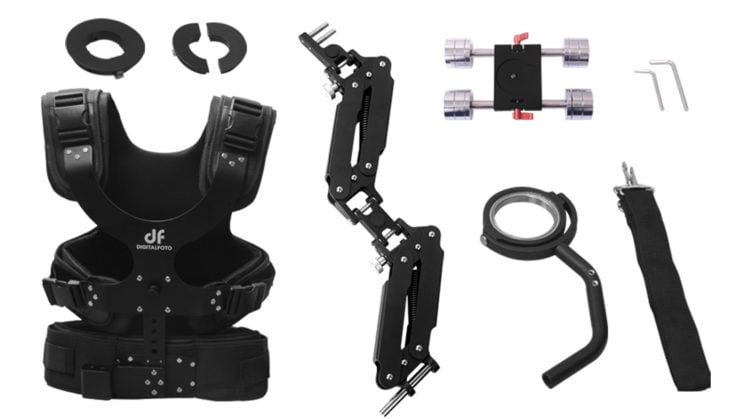 The whole Thanos Pro kit with the vest, arm, counterweights, etc. comes in at around 9kg in total. Once you add a Crane 2 at 1.25kg, a camera and lens weighing possibly another 2kg, it adds up real quick. But that weight is spread across your body, and the spring-loaded arm means that your own arms aren’t having to carry all that weight.

There are a couple of 1/4-20″ mounting holes on the collar, allowing you to also attach other devices like a monitor or gimbal remote. The arm has a total load capacity of up to 9kg, so it should be able to easily handle most loads you could potentially want to put on it.

At the time of recording the interview, the Thanos Pro hadn’t quite been released yet, although it’s available to buy now for $888.