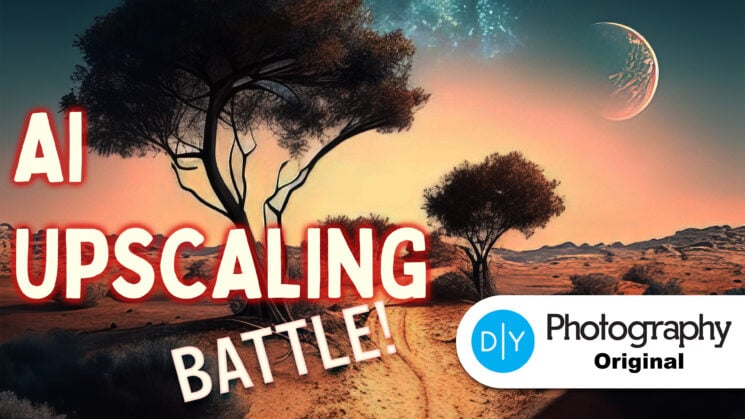 It’s time for another software battle! So far, we’ve compared AI photo sharpening and AI photo noise reduction. Next up, is AI photo upscaling, and we’re putting Adobe Photoshop, Topaz Gigapixel AI, Skylum Luminar Neo Upscale AI, and ON1 Resize AI 2023 up against each other. Upscaling images is important for print purposes, and it even slips in with pro-stock shooters who need to create images at specific resolutions. Having AI helps us by upscaling whilst preserving details and filling in the blanks sounds great, but which software does it best?

Another use for upscaling that is coming to the forefront in our industry is AI art. Naturally, I decided to use an AI-generated image to test and compare AI photo upscaling. I reached out to AI image expert Micah Burke who created this scene for the test using MidJourney, an AI text-to-image generator using Discord as an interface.

The image we are starting with is 512 x 512 pixels at 72 DPI. It’s tiny! This is about half the width of an Instagram photo. An image this small is a great subject for this test because we’ll easily see what’s going on in the upscaling and what the AI is doing. I enlarged the image to six times its size for each test, resulting in a 3072 x 3072 pixels image. Here’s the original photo: – 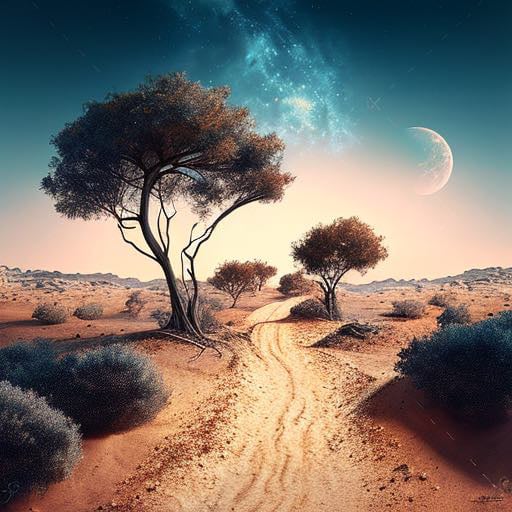 And here are the details for those who want to see it with their own eyes. I used the automatic settings for the test, not adjusting any sharpening or noise sliders. This way, the A.I. will do as much work as possible. 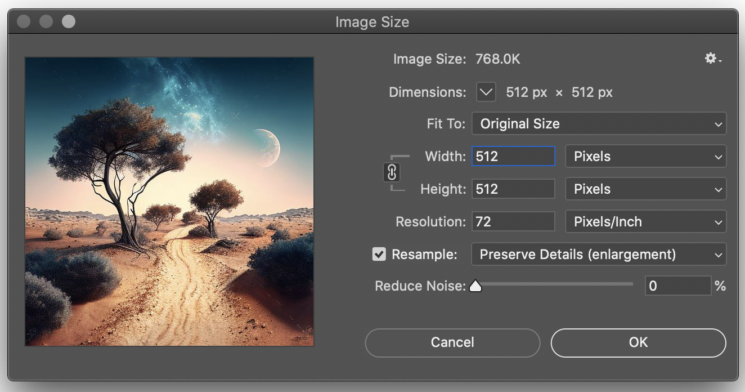 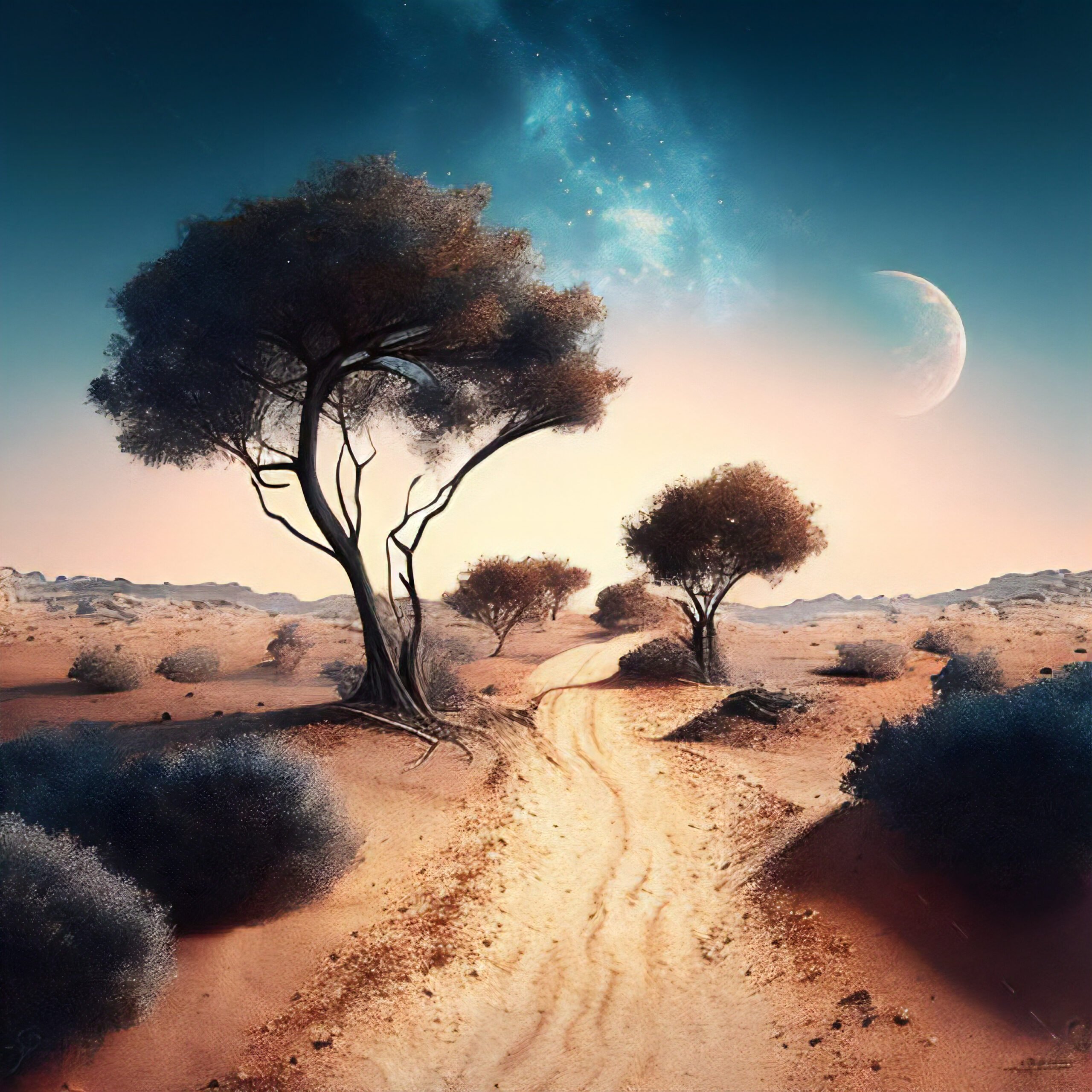 Adobe Photoshop includes the Adobe Sensei-powered Neural Filters, which are constantly evolving. Adobe is putting a lot of time into this tech. The interface is easy to use but doesn’t exactly describe what it does. You would expect an “Upscaling Silter” but instead, I used the SuperZoom Neural Filter. Adobe describes super zoom as “zooming in and cropping an image whilst using AI to fill in details“. This doesn’t exactly sound like upscaling, it sounds like cropping, but it worked. 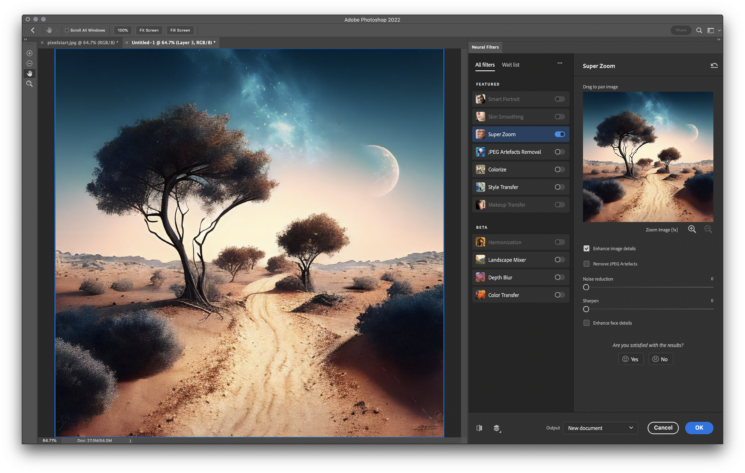 The result is far softer than I would have thought. We’ve definitely lost a lot of focus in the sky, and we’ve even lost some detail in the tree branches. Let’s move forward. 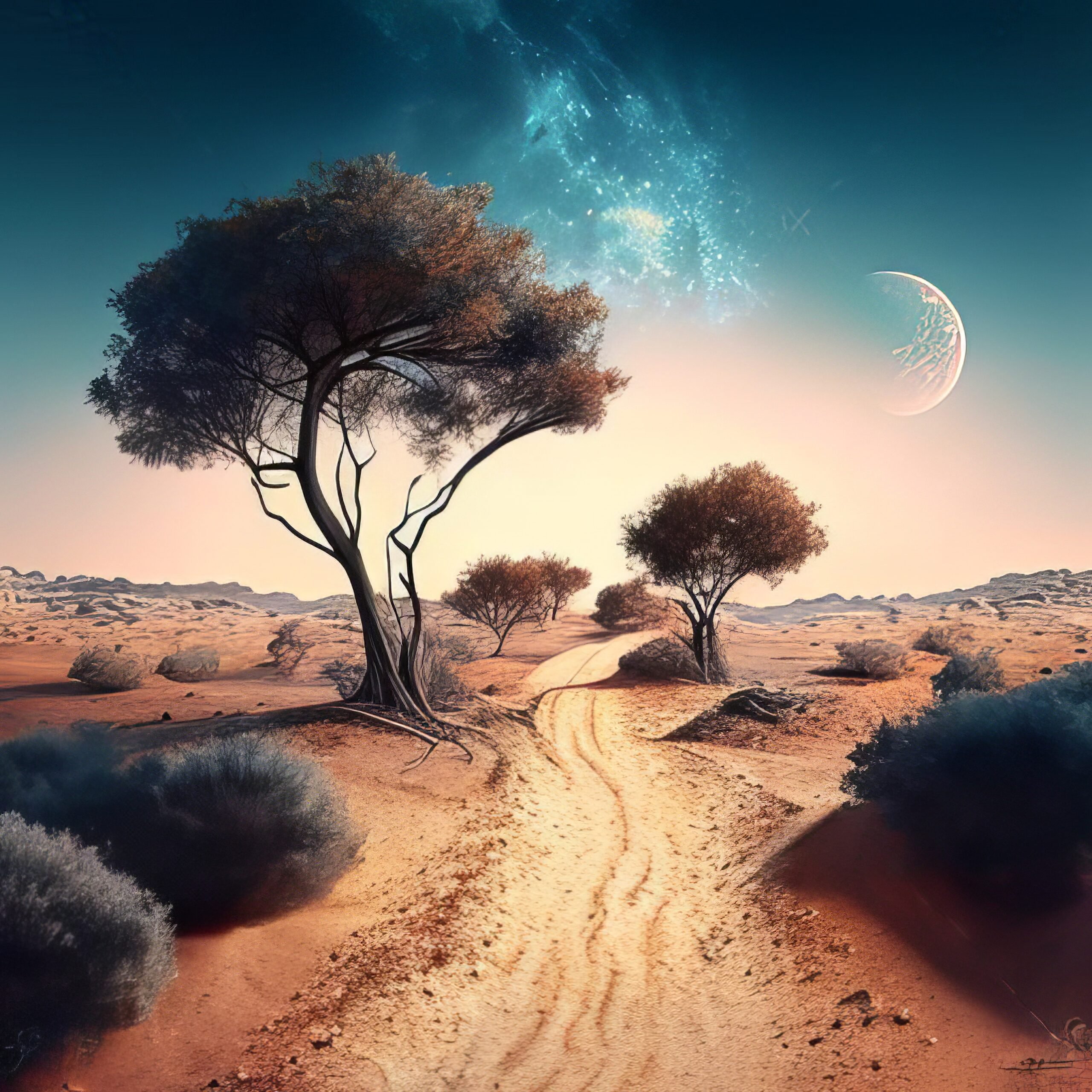 Topaz Photo AI incorporates Topaz Gigapixel AI. The upscaling here is fantastic. Everything is automatic, details are preserved and refined, and the interface is clean and simple. You can see the preview and the result side-by-side. This makes for easy comparison, and the simple options made it very quick and easy to complete this 6x upscale. 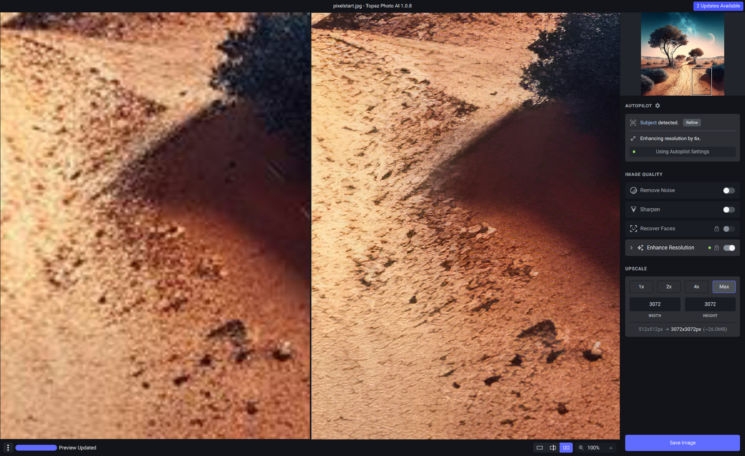 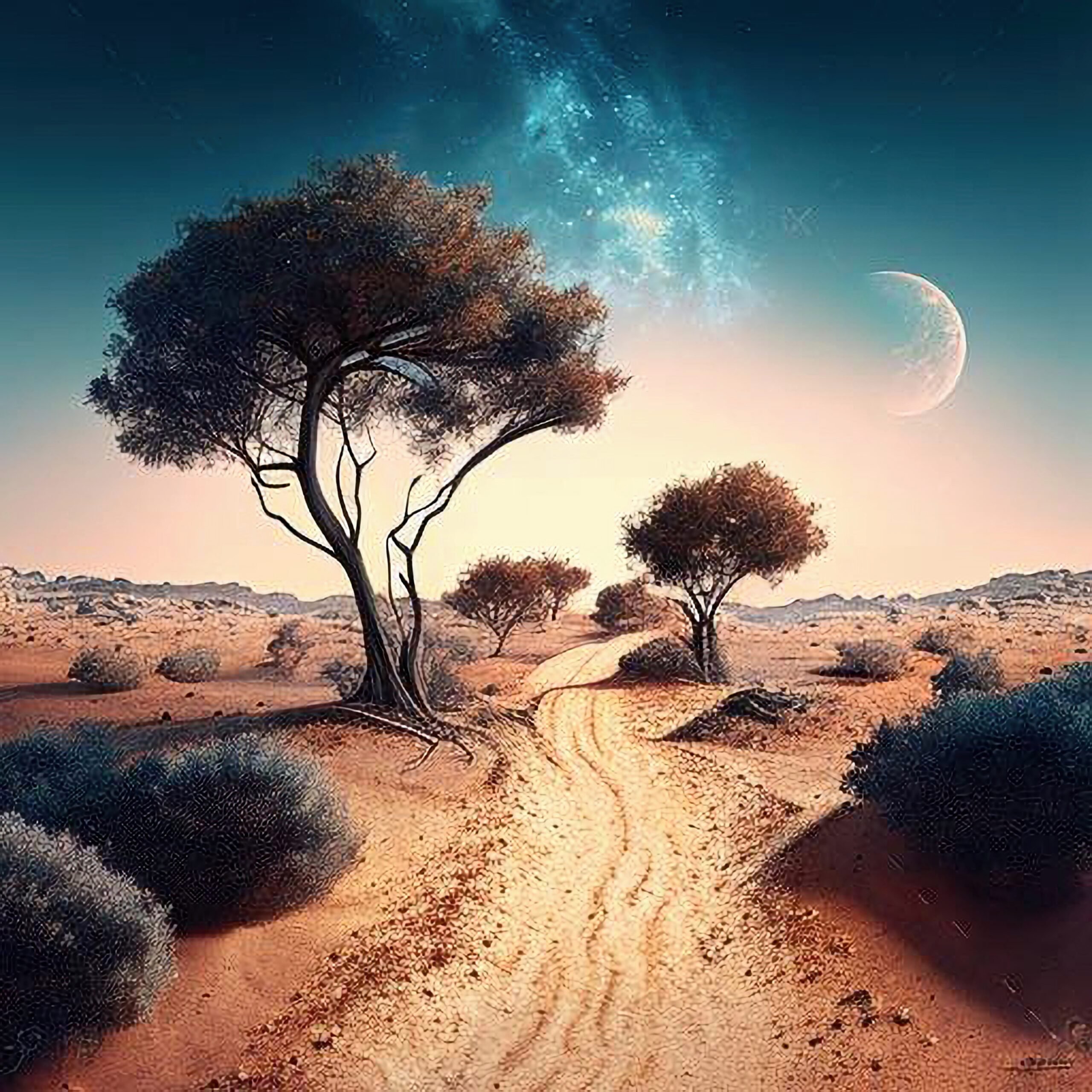 Luminar Neo bundles Upscale AI in its latest extensions package, an add-on that forms part of their subscription. The upscaling here would probably look great with some refinement, but straight out of the box, the only word I can think of is ‘crunchy.’ We haven’t lost anything in upscaling with this AI tool, and the software is jam-packed with other features that can help us refine everything, but here’s a problem I had:

I couldn’t find it. It pains me to say this, but I couldn’t find the new Upscale AI within Luminar Neo. I searched the Edit screen several times and ended up heading over to YouTube to find a third-party video to show me where it was. After triple checking that I had the extension installed. 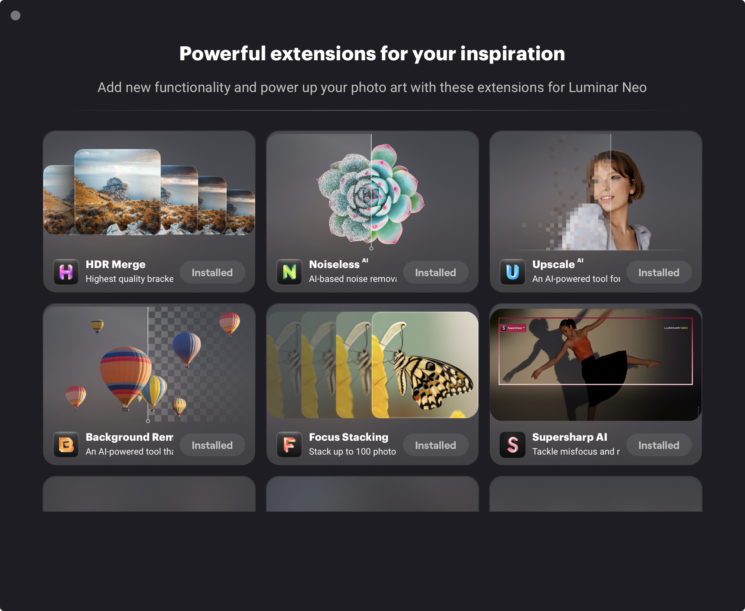 If you wondered, it’s in the Catalog, down on the right-hand side. I would have put it in the Edit screen, personally. 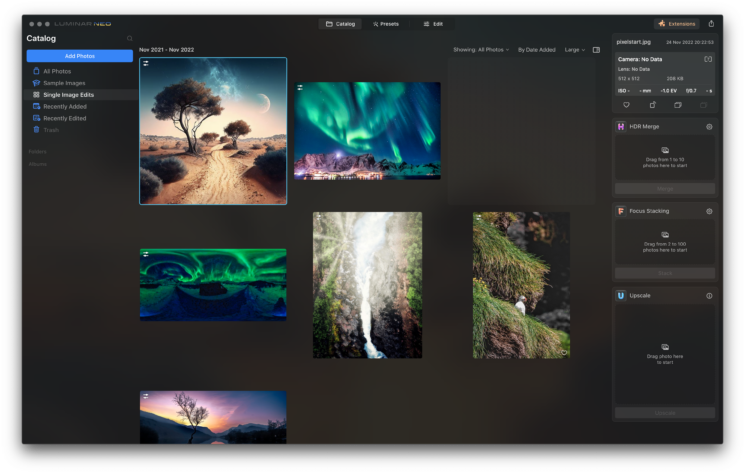 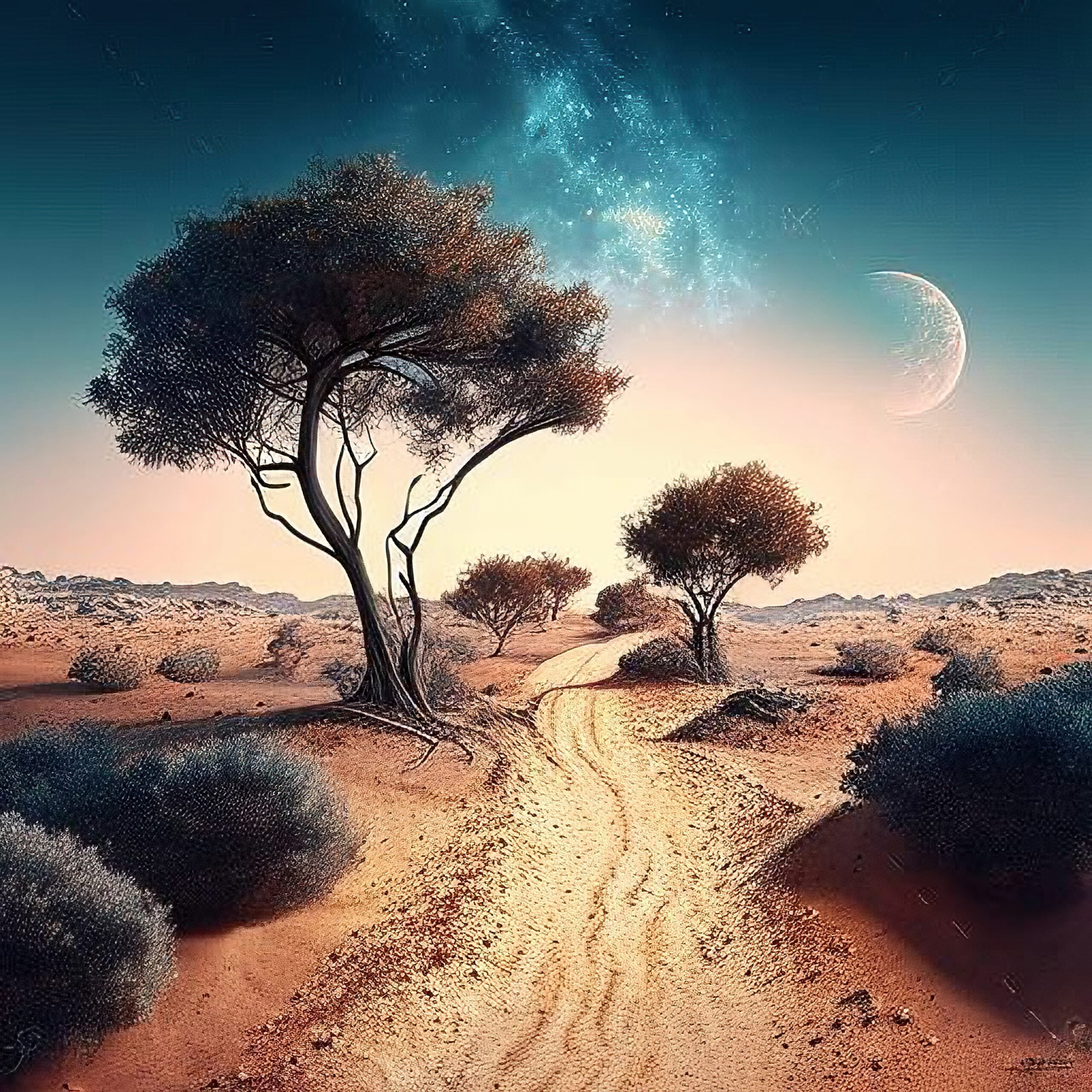 ON1 Resize AI claims to be the ‘industry standard,’ according to their website marketing. Their entire range is incredibly powerful, and the result from this tool was not dissimilar to that from Luminar Upscale AI –  There are a lot of preserved detail and blanks filled in, but it does feel ‘crunchy’ once again. With a little extra hustle, this will be a great image, but here’s my gripe:

It’s difficult to use. It just didn’t make sense. The tools here are great if you know exactly what your output needs to be, but it’s tricky for someone as simple as me who just wants to make a photo bigger. On the flip side, this tool offers a great level of manual control to those who want it, and it caters to specifics, allowing upscaling for certain purposes such as printing. 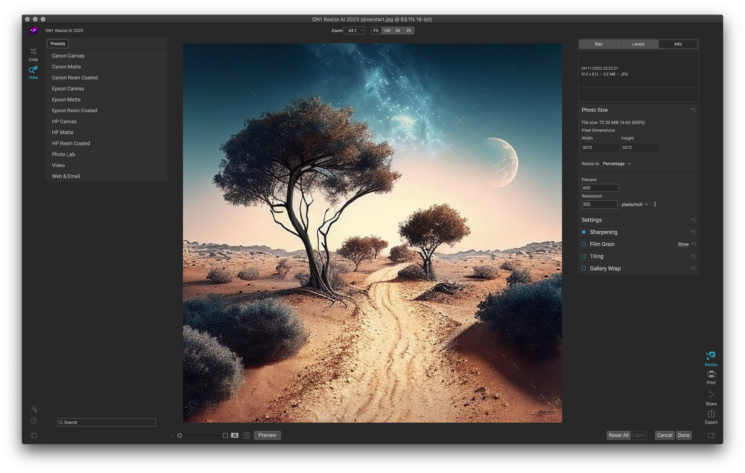 TopazLabs Gigapixel AI. There it is. They’ve done it again! TopazLabs won the AI sharpening challenge, and now they’ve also won the upscaling battle. All the software bits I tested worked and did what they were supposed to do. TopazLabs Gigapixel AI just did it with a little more finesse. It lets the AI actually do the work instead of offering a steering wheel. Congratulations Topaz!

I’m not counting this as it’s unfair to do so at a different resolution, but this image has been natively upscaled within MidJourney to 1024×1024. This image shows how the MidJourney AI upscales the image, and I decided to throw it in at the end as a matter of interest. With this one, we can see that the AI is making far wilder adjustments and doing a lot more to fill in the gaps than the other AI software in the comparison. On the other hand, it is also “updating” some of the details. 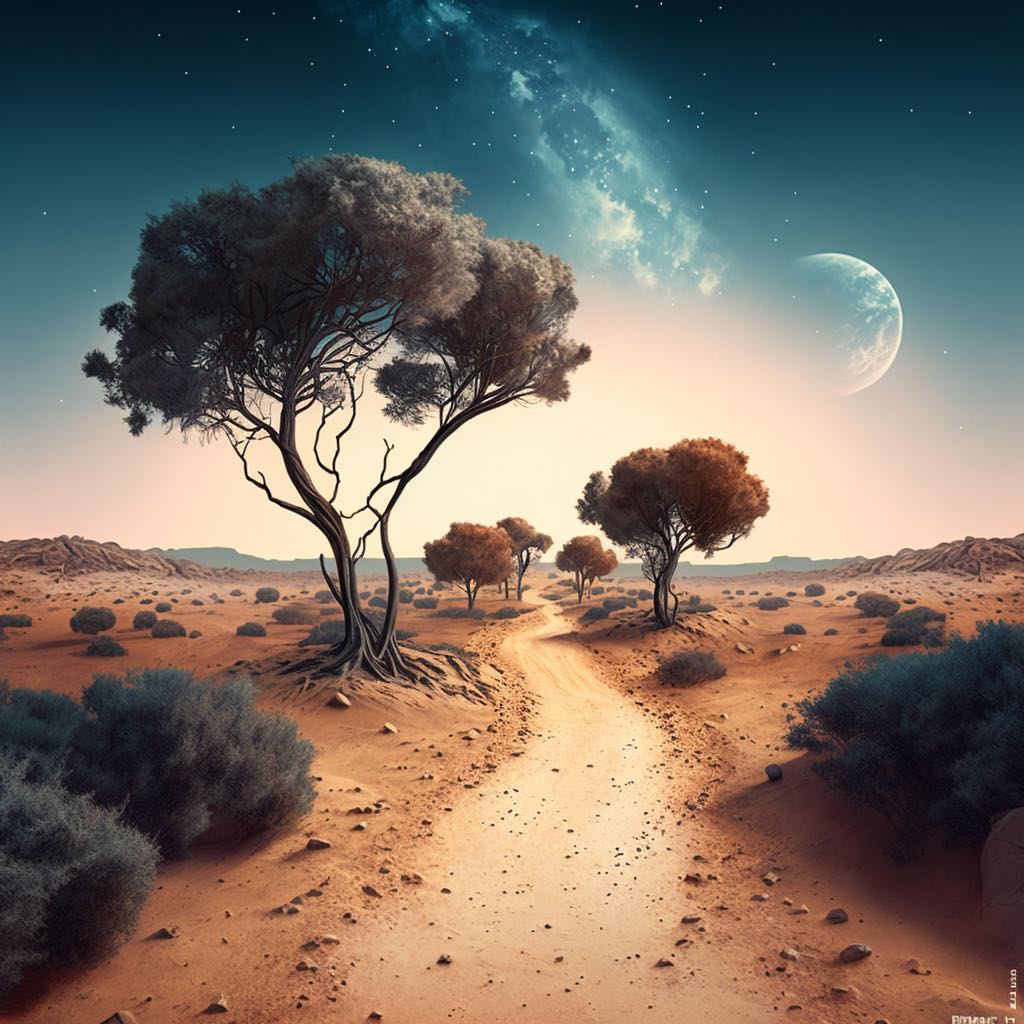