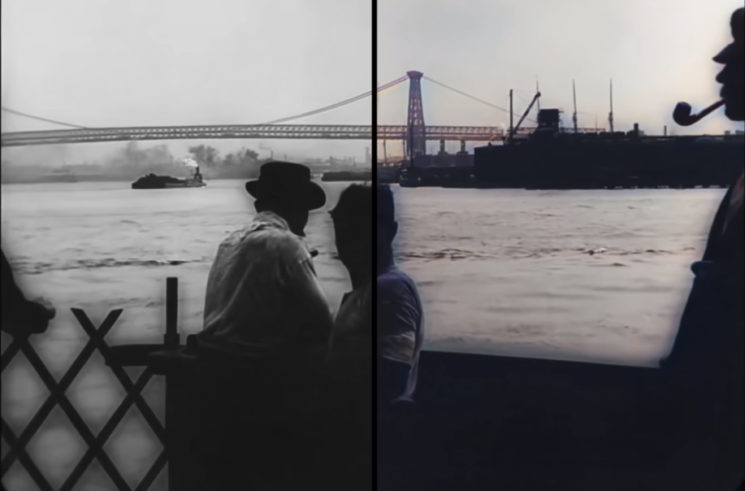 Recently, we’ve seen a bunch of upscaled and colorized historic footage: from 1911 New York to 1972 Apollo 16 Lunar Rover ride. Even videos as old as the iconic 1896 The Arrival of a Train at La Ciotat Station are possible to upscale to 4K and get a splash of color. While many of us find them inspiring and exciting, historians don’t seem to share the opinion. In fact, they argue that the whole process is “nonsense” and they’d like YouTubers to stop doing it.

We saw most of the aforementioned videos on Denis Shiryaev’s YouTube channel. Judging from the comments on his page and our blog, people seem to like this kind of videos. I like them, too. I enjoy watching the original black and white footage, of course, but these upscaled and colorized ones give a new dimension to the experience. They’re fun. They make the past seem closer. “That is something that our clients and even the commenters on YouTube have pointed out consistently,” Elizabeth Peck of Neural Love told Wired. “It brings you more into that real-life feeling of, ‘I’m here watching someone do this’, whereas before you’re looking more at something more artistic or cinematic.”

However, historians don’t seem to share the broad audience’s enthusiasm. Luke McKernan, lead curator of news and moving images at the British Library, gave an example of Peter Jackson’s documentary They Shall Not Grow Old. It’s a World War I documentary in which you’ll see upscaled and colorized footage from the Great War. But McKernan told Wired that this process is “a nonsense” that undermines the original footage. “Colourisation does not bring us closer to the past; it increases the gap between now and then. It does not enable immediacy; it creates [a] difference,” he argues.

Emily Mark-FitzGerald, Associate Professor at University College Dublin’s School of Art History and Cultural Policy says: “The problem with colourisation is it leads people to just think about photographs as a kind of uncomplicated window onto the past, and that’s not what photographs are.” After all, all these colors and details that we see in the enhanced videos never were there in the first place. They were never recorded, they were added later, and that’s a part of the problem. So to say, these additional frames and colors don’t really make them a part of history. Especially if the footage doesn’t get colorized accurately.

I understand the historians’ viewpoint and what can be problematic about these upscaled and colorized videos. Still, as an average consumer, I still find them interesting to watch and they make me feel like I’m a bit closer to historic moments. What’s your stance on this?