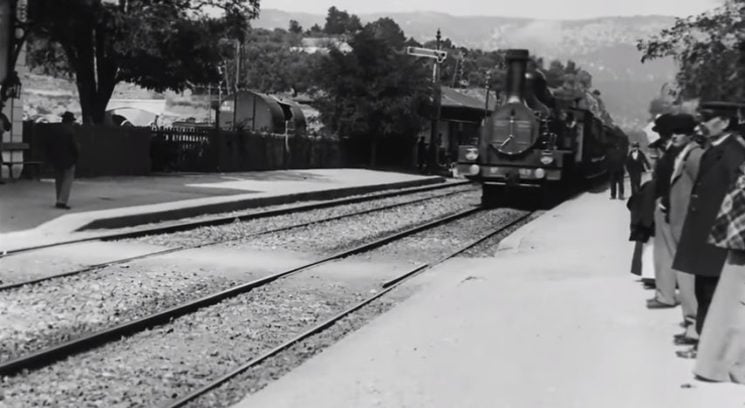 AI has already been used to upscale images and increase their resolution. But how about applying it to a film? A 124-year-old silent film, to be exact? Denis Shiryaev used AI on Lumière Brothers’ The Arrival of a Train at La Ciotat Station and turned the iconic 1896 film into a 4K 60fps video.

Let’s start with the original video. Titled L’arrivée d’un train en gare de La Ciotat, it was publicly premiered in January 1896. Perhaps you’re familiar with the urban legend about it. It says that, when the movie was first shown, the audience was terrified of the moving image of a train coming straight at them. They allegedly started to scream and ran to the back of the cinema. Denis used this version of the film for his experiment:

To upscale the original film, Denis combined two publically available algorithms: Topaz Labs’ Gigapixel AI and DAIN. Gigapixel AI was used to sharpen and clarify images after upscaling them. As for DAIN, it inserts frames between the keyframes, so Denis used it to increase the frame rate. Here is the result:

I watched this 4K version and for a minute there, I think I stopped breathing and blinking. I didn’t run screaming to the back of the room, but I enjoyed looking at the behavior and fashion of people from two centuries ago.

The result isn’t flawless, though. There are bits where the footage seems kinda “glitchy.” But nevertheless, you can see the difference. Also, I believe that experiments like this are promising, and they could be useful for digitizing old footage in archives all over the world.

« Photographer captures the aurora from his plane seat
Hands on with the Samyang AF 18mm f/2.8 FE for landscape photography »