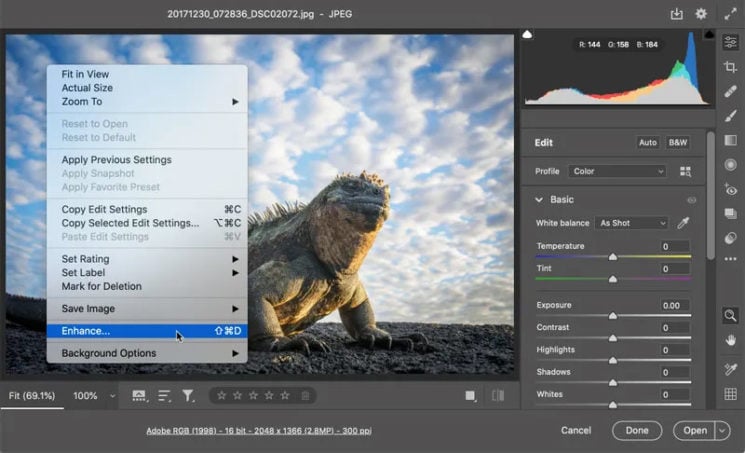 Adobe Camera Raw now includes a new feature that will be coming soon to both Lightroom and Lightroom Classic. It’s called Super Resolution and it’s essentially a machine learning AI-powered method of upscaling that offers massive image upscaling benefits at the push of a button. Well, you have to push it a couple of times and check a box in a dialogue, but then it’s at the push of a button.

Julieanne Kost, Principal Evangelist at Adobe posted a video about the new feature to YouTube saying that the model for the new feature was trained on millions of photos, and uses that data to “intelligently boost the resolution of an image while maintaining clean edges and preserving important details”.

Julieanne spends a good five minutes going over the feature in the video above, talking through the process, but also why you might want to do it in the first place. Naturally, the best possible starting files for Super Resolution resizing are raw files, straight from your camera. But it will also work with just about any other format the Adobe Camera Raw supports. Of course, if you start using it on really highly compressed jpegs, your final results probably won’t be that great.

The Super Resolution feature we built around this technology is very simple to use — press a button and watch your 10-megapixel photo transform into a 40-megapixel photo. It’s a bit like how Mario eats a mushroom and suddenly balloons into Super Mario, but without the nifty sound effects.

The Super Resolution feature is easy to use by right clicking on the image window in Adobe Camera Raw and choosing Enhance. In the preview box, check Super Resolution and hit Enhance again. After a bit of AI number crunching, it spits out an enhanced DNG file and you’re done. And the samples on the Adobe blog between standard bicubic upsizing and Super Resolution are pretty impressive!

With the resolution of cameras today, upscaling images isn’t as in demand as it once was. Sometimes, however, we do still need to scale things up. And perhaps new upscaling technology can help breathe some new life into those older resolution images we shot back when we thought 6-megapixels was a lot! (I still have my pair of Nikon D100 bodies somewhere).

Head on over to the Adobe Blog to find out more and be sure to update your ACR. Coming to Lightroom and Lightroom Classic soon.