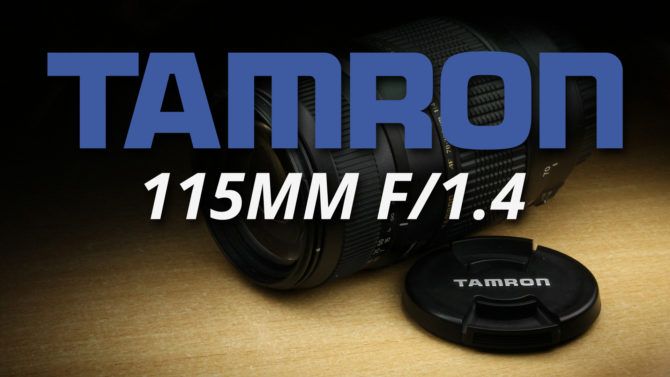 It seems that these days, 3rd party lens manufacturers are doing everything they can to try to upstage everybody else. After Nikon’s recent introduction of the 105mm f/1.4E, Tamron have now filed a patent for a 115mm f/1.4 VC lens. If they make it, this would make it the longest f/1.4 autofocus* lens out there, taking Nikon’s recent crown.

What’s even more interesting than the slightly longer focal length is the fact that this lens comes with VC (their version of VR/IS). The Nikon 105mm f/1.4 doesn’t have any kind of built in stabilisation at all. If this becomes more than just a patent, that single feature alone could see it winning out for Nikon shooters. Assuming the optical quality stands up to demands.

The patent was filed filed back in February last year, and finally published a couple of days ago, reports Egami. Here’s some of the (translated) specs.

The specs are interesting, and an even longer f1/4 lens with vibration reduction will be very welcome to a lot of shooters. I’d considered picking up the Nikon 105mm f/1.4 myself, but I’m in no rush. Having seen this filing, I may just wait now, and see what happens.

Tamron are expected to make some kind of announcement about something between now and Photokina. Presumably they’ll want to wait for the buzz around the Canon 5D Mark IV to die down a little first. Whether this lens will be amongst those announcements is unknown. I’d say it’s doubtful, though.

So, what do we think? Is this another patent for the sake of filing a patent and stretching their muscles in public? Or do you think Tamron will bring this one to reality? Now that Nikon’s lens has started to get around and sample images are coming out, it seems many photographers do want this kind of focal length at f/1.4. Let us know your thoughts in the comments.

* As was pointed out in the comments (Thanks, David!), there is the Zyoptics Mitakon 135mm f/1.4, but it’s manual focus and has been “available for preorder” for almost two years now. It doesn’t look like it’ll ever actually hit production.

Google Obtains Patents for the Development of Contact Lens Cameras