I recently created an image for the Dark Realm Collective summer art pack, which featured a sea demon causing mayhem for a toddlers bath time. The image was being shot on location. I obviously couldn’t shoot the child at the same time as the model in makeup as it would have been terrifying for him. So I had to capture each character separate. With this in mind I decided to blend two scenes together, to make it seem like they were both shot together. First of all I set up my tripod in the corner of the bathroom, and attached my camera. Knowing how I wanted the scene to look, I composed my camera, set the focus, and locked it in. Now all through the shoot, the camera and the tripod do not move. A remote trigger is very helpful in this situation as you don’t want to press the shutter down on the camera, and get any shake.

Everything is set up, so all you have to do now is focus on your models. I shot the child first, early on in the day. We literally took around 10 photos, he really got into his role, and we were done. 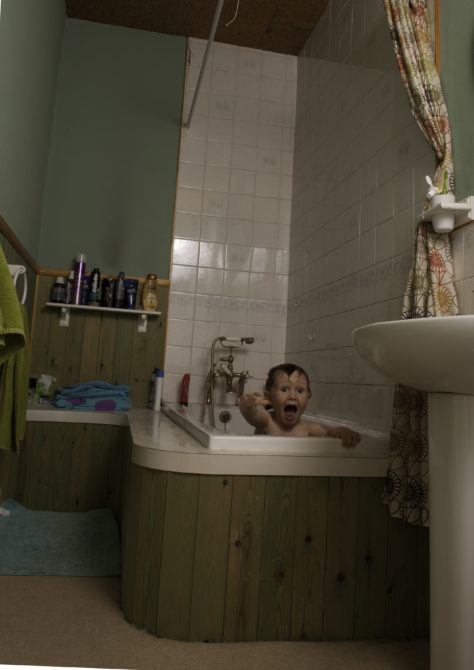 Next up was the model. But she wasn’t arriving till the evening, and she had to have lots of FX make up applied. So I left the tripod set up as it was, and prepared for arrival of the make up artist. Later that evening, once the makeup was applied, I got her into place in the bath, then literally all I had to do was direct her and press the shutter. No moving the camera around, focussing or trying to match the previous images. 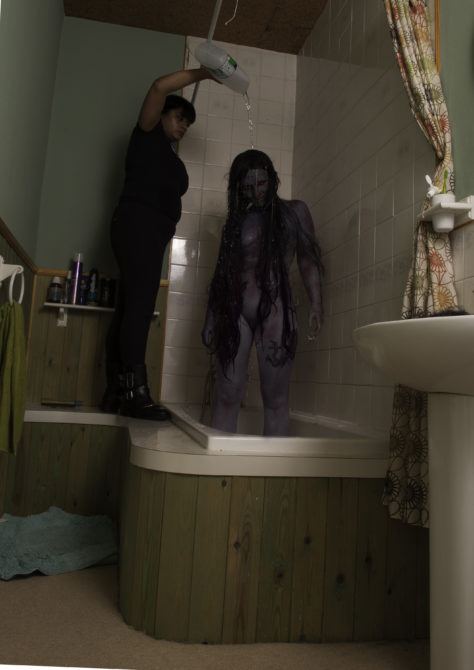 Once in Photoshop, because I had planned ahead, and because I setup the shot first, all I simply had to do was bring both images into the layers pallete, one on top of the other. I then added a layer mask, and with a brush painted in the the bottom child layer using the layer mask. Simple! 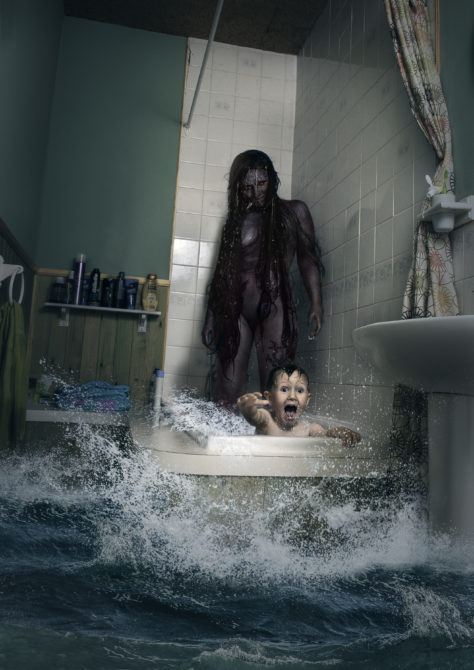 Another good reason to blend when compositing is so you can also blend multiple exposures together, and quickly erase light sources from your images. For example this image here……… 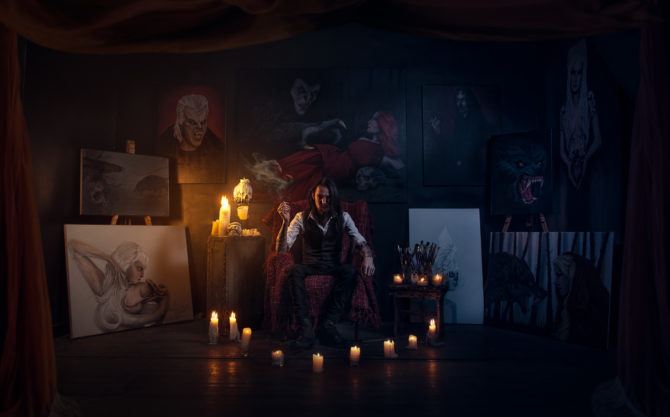 I shot this image of my friend and painter Martin Woodhead. He is a local artist who creates some amazing art work under the name Martin Darkside. He wanted an environmental portrait featuring candles, skulls and his work. Knowing that I was going to be using flash, and it would probably over power the flames of the candles, I also decided to use a gelled flash as motivated light to Martins left too…….so multiple shots were definitely going to be needed. One to erase the light source to the left, and one to bring in the exposures for the candles.

Again I set up my tripod, composed the image, and locked in my focus.

I took one image of martin in his pose, with the motivated flash lighting his left side. 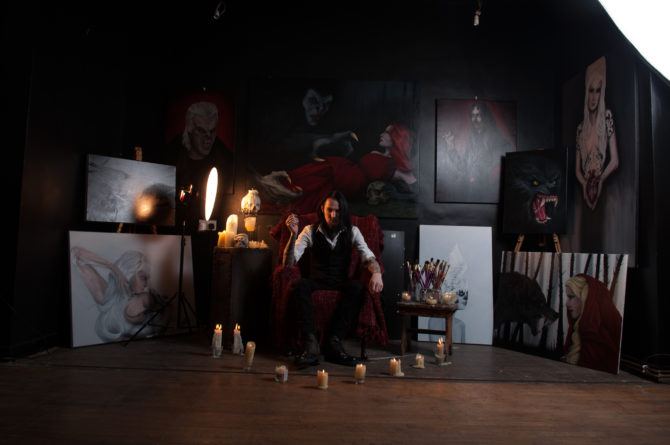 Too enhance the feel of the candles I then moved the motivated light to the edge of the image, to light up the area by the skull candles and the left of the chair….which I would paint in and erase the light out of, from the previous image. As we already had Martin posed, lit and captured, he didn’t need to be in any more of the shots. 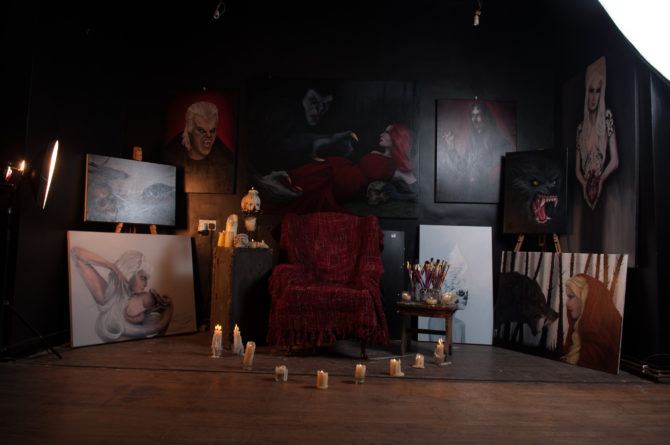 As I wanted the image to have a moody atmosphere, the flash had killed any ambient I wanted, including the candle light. So I turned off the strobes, and took a natural light shot to capture the candle flames and candle light reflecting on the floor. 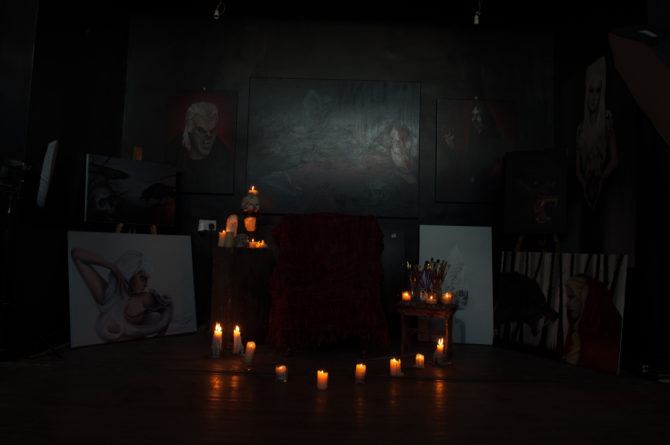 Once again, because I used a tripod to lock in composition, and locked in focus, all I had to do in post was stack my layers up. Once that was done, add layer masks and blend in the exposure using a brush, and by painting on the layer masks. 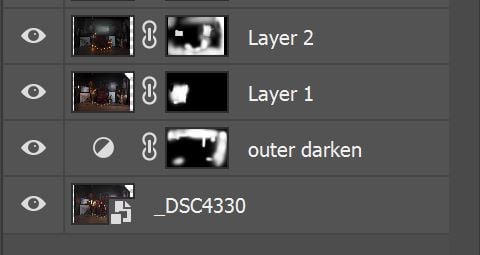 Here you can see the layers stacked with the layer masks attached. The bottom is the image with Martin in his pose and the strobe lighting his left side. Then above that is the strobe, re-placed and hitting the candles to his left. Above that is the natural light shot. As you can see I inverted the masks on the two above layers, this hid those images from view. All I had to do then was paint in on the layer mask the parts of the hidden images I wanted to reveal.

Blending is far easier then cutting out, and all it takes is for you to put some effort in to pre planning. Many times though I will use blending and cutting out with selections in the same image. Some elements are easier to blend and some look better when cut out. It is up to you to define your own workflow, but by learning both you are covering all bases. Remember, its not how you get to your destination, as long as you get to your destination. The in-between part will evolve and refine as you grow as an artist/photographer.

About shooting a focal length blend and blending it in Photoshop

This is what Photoshop’s 27 different layer blending modes do