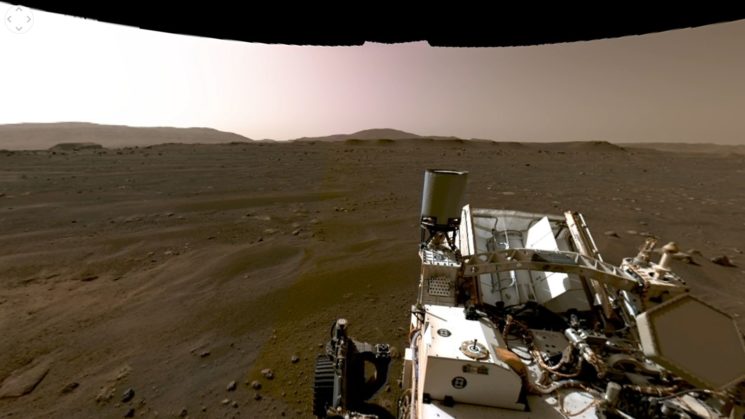 Have you had enough of the Perseverance stuff? Yeah, me neither. NASA has just published an interactive image that lets you see what the rover is seeing. This detailed 360-degree photo lets you look around Mars’ Jezero crater and it’s based on images taken by different rover’s cameras.

On 18 February, the Perseverance rover made the successful landing in the Jezero crater. So, the area you see in the short video above is the rover’s landing site. The panorama was taken by the rover’s color Navigation Cameras, or Navcams, located on the remote sensing mast (or “head”) of the rover.

As the mission continues, there will be more and more photos to come, and I’m honestly looking forward to them. After all, Perseverance is equipped with more cameras than any Mars rover so far: 19 of them. Still, the rover’s key mission isn’t photography, it’s just a bonus. It’s mainly there to search for signs of ancient microbial life and help scientists explore Martian geology and past climate. It will also be the first mission to collect and cache Martian rock and regolith. And all of this should pave the way for human exploration of Mars.

Since the video above offers a 360-degree view, make sure to open it in one of these browsers. Chrome, Firefox, Internet Explorer, or Opera. If you’re on the phone, play it in the YouTube app for the best experience.

If you’ve been following DIYP over the past few days, you’ve seen that we covered some other interesting Perseverance-related news. And if you haven’t, here’s your chance to catch up. :) Check out the first photo the rover sent back to Earth, as well as its color version. Take a look around the Mission Control in 360 degrees, with emphasis on the emotional moment of landing. You can even “land on Mars” with this video (I enjoyed watching this more than I thought I would). And finally, if you wanna have some fun and send yourself to Mars, check this out.

« Who should own photos of slaves?
The NONS SL42 Mark II adds EF mount and actually fills the medium format Instax frame »