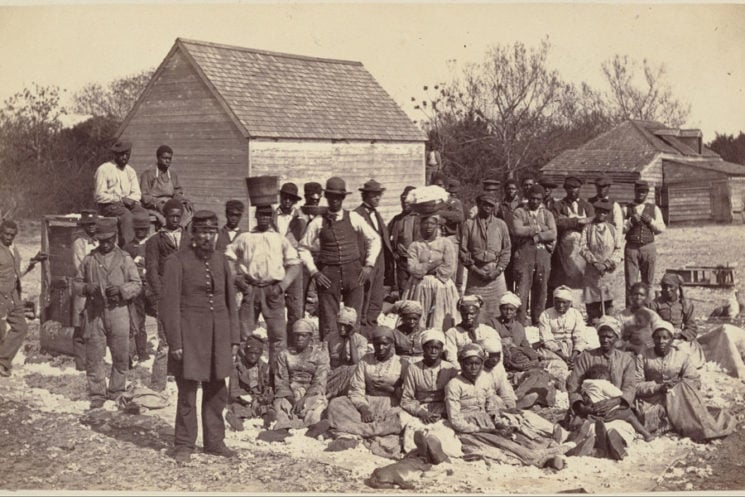 In 1976 while rummaging through an attic of Harvard’s Peabody Museum of Archaeology and Ethnology in search of old museum publications, editorial assistant Lorna Condon opened a drawer in a wooden cabinet. Inside, she found a number of flat leather cases which contained a series of daguerreotypes of partially and fully nude Black people. Names were handwritten on paper labels identifying 7 individuals: Alfred, Delia, Drama, Fassena, Jack, Jem, and Renty with assumed ethnicities and occupations. The daguerreotypes represented some of the earliest known images of slaves in the U.S.

In 1846, Swiss-born biologist Louis Agassiz landed in Boston for his maiden trip to the U.S. After enduring “prolonged contact with negroes” at his hotel, Agassiz wrote of his disgust to his mother. This encounter combined with his meeting with craniologist Samuel Morton, led him to espouse the idea of polygenesis – the theory that life arose from separate creations – putting him at odds with the Christian notion of a single genesis. He later took this idea further, declaring in 1847 that the different races of humans were actually different species, with Caucasians as the superior race.

In 1850 after a meteoric rise in academic circles (a colleague noted that “he sought fame at any price”) and an endowed professorship at Harvard (paid for by a wealthy slave owner Abbott Lawrence), Agassiz visited Columbia, S.C. at the invitation of Dr. Robert W. Gibbes. Gibbes promised Agassiz the opportunity to see African-born slaves, which would allow for anthropometric study. Shortly after Agassiz departed Columbia, Gibbes hired daguerreotypist Joseph T. Zealy to photograph seven slaves in his photographic studio.

Later that year, Agassiz excitedly shared the images to members of the Cambridge Scientific Club. They were supposed to represent visual proof of the inferiority of Blacks. But the images were never displayed again in his lifetime, and were relegated to storage until their rediscovery 126 years later.

Daguerreotypes represent the first publicly available photographic process. Developed by Louis-Jacques-Mandé Daguerre in 1839, the process uses a sheet of silver-plated copper polished to a mirror-like sheen. Unlike glass or film negatives, the image is fixed to an opaque medium, so each daguerreotype is unique. Duplicates can only be made through photographic reproduction, and the resulting image never captures the mesmerizing quality of the original where even a subtle shift in the viewing angle can alter the image.

When stored in climate-controlled conditions and away from light, daguerreotypes can last for well over one hundred years. But they are nevertheless fragile, and despite the fact that tens of thousands of slaves purchased their own daguerreotypes in the 1840s and 1850s as a form of vernacular photography, the Zealy daguerreotypes are unique because of Agassiz’s intent.

Artist Carrie Mae Weems confronted the use of photography to support racism through her project From Here I Saw What Happened and I Cried (1995-1996). The installation appropriates images of slaves and other Africans and African-Americans in the 19th and 20th century, including the Zealy Daguerreotypes, which Weems used without permission and in breach of a contract with the Peabody Museum. When Harvard threatened to sue, she dared them to follow through. Harvard eventually agreed to a percentage of each sale, which was used to acquire part of the series for its art museum.

In an interview with Deborah Willis, Weems expressed exasperation around the continual work that contemporary Black artists performed to redress the history of the Zealy images. “We’ve been asked with cleaning up the mess, a mess often left behind by white people. And I’m tired of it. I’ll admit, some of this has been fine with me. Like okay, let me see what I can make of this mess. But much of it is bullshit; it keeps us locked in a futile struggle for power and ultimately has serious implications—the burden is a hindrance to a broader practice. So here we are in the 21st century, cleaning up a mess that whites willingly or otherwise refuse to even accept as possible.”

In 2019, Tamara Lanier –  a retired Connecticut chief probation officer – sued Harvard for possession of the daguerreotypes claiming that she was descended from Renty and that the school had profited from the images which were captured through fraudulent means.

Although photographers might assume the basis of the complaint revolves around copyright, copyright infringement has nothing to do with the case. Although copyright is written into the Constitution, and the U.S. passed the Copyright Act of 1790 to cover maps, charts, and books, photos weren’t explicitly protected by copyright until the Copyright Act of 1976. And the 1976 Act and its 1999 amendment would still exclude the Zealy images from protection, thus they are in the public domain – a position confirmed by Rachael Dane, a spokeswoman for Harvard.

Nevertheless, museums have exerted control over the licensing of images despite the fact that Bridgeman Art Library v Corel Corp established that museum-style reproductions couldn’t be copyrighted because they lack “originality.” And until Sept 2020, Harvard charged “hefty” licensing fees for the Zealy images while frequently using them without context. Like the keloid-scarred image of Gordon (aka “Whipped Peter”), the persons depicted in Zealy’s images often were visual proxies to represent all slaves. The daguerreotypes were effectively used as stock photos for slavery without regard to the persons behind the images.

Lawyer Kevin Mattei told the New York Times that Lanier could only claim ownership “by proving that the photographer had given them to the enslaved people who sat for them.” But to many scholars, the Times notes, “legal arguments are not really the point. The lawsuit, they say, needs to be understood not just in the context of law, but in the broader history of African-American dispossession.”

Lanier’s complaint focuses on Harvard’s “longstanding policy and practice” to “avoid accountability for its complicity in the institution of slavery…” It further states, “Harvard, the wealthiest university in the world with an endowment of $40 billion, has seen fit to further enrich itself from images that only exist because a Harvard professor forced human beings to participate in their creation without consent, dignity, or compensation.”

During the persistent Black Lives Matter protests of 2020, a recurrent and contentious theme resonated amongst photographers: the idea of consent. For many photojournalists, the notion of gaining consent of a photographic subject was dead on arrival. Photojournalists were there to bear witness. Editors and the public could argue about the meaning of photos later, but there was no room for consent where breaking news was concerned. Others argued that the effect of photos needed to be considered before capture because harm disproportionately affected minorities and the powerless.

Chattel slavery treats Black slaves as property, and thus a slave could not legally consent to having their photo taken. An originalist might declare that we can’t use a 21st century lens to consider ownership and consent of a 19th century daguerreotype. On the other hand, slavery and the ideas espoused by white supremacists (i.e. Blacks are inferior species) were the basis for Agassiz to force seven slaves to strip naked to advance his racist ideology. The creation of the daguerreotypes was predicated on the fact that the slaves could not consent because they were an inferior subspecies – a scientifically-provable falsehood – so why should Harvard be able to profit off them, or hold title to them today?

Intent and consent are foundational concepts in analyzing the Zealy daguerreotypes. Unlike a BLM protest or the Capitol Insurrection, Agassiz used photography to promulgate an ideology masquerading as science. He used his fame and the resources that Harvard provided him to photograph slaves for the purposes of providing visual evidence of their inferiority. But as Tanya Sheehan noted in the excellent book “To Make Their Own Way in the World: The Enduring Legacy of the Zealy Daguerreotypes,” the images “never reached the public for which they were intended. They failed, it seems, to communicate the essential difference that Agassiz so desperately wanted them to convey.”

Institutional reckoning with racist photographic histories isn’t isolated to Harvard. Hawaii’s Bernice Pauahi Bishop Museum recently apologized for its role in inviting anthropologist Louis R. Sullivan to study racial differences between “pure” and mixed-ancestry Hawaiians. Sullivan photographed Hawaiian families without fully informing them of his intent – only to ship hundreds of images along with plaster busts to the Second International Congress of Eugenics in 1921.

And the infamous Ivy League Nude Posture Photos project was quarterbacked by William Herbert Sheldon and Earnest Albert Hooton, who might have been pursuing a theory “on body types and social hierarchy.” Students, many who are still living, were simply told that the photos were a part of the onboarding process for freshmen between the 1940s through the 1970s. Although many images were destroyed and others transferred to the Smithsonian, others are still in circulation today being sold on sites like eBay with little regard to the persons depicted.

At Auschwitz and Phnom Penh, William Brasse and Nhem En respectively took thousands of photos of prisoners who were subsequently tortured and executed. Those images now reside in museums to warn of the horrors of genocide. There is scholarly and societal value in maintaining an archive of these atrocities, but at what cost to the families?

In most societies, we’ve come to assume that possession equates ownership. And in many situations, the concept makes total sense. No one wants to be confronted in the parking lot by a stranger claiming ownership over their car – keys in my pocket be damned! But in the case of the Zealy Daguerreotypes, the facts point to a terrible injustice that began with the lining up of slaves and forcing them to strip for photos that would be used to advance a racist ideology, and continues today with Harvard’s possession and control of these artifacts.

Harvard already possesses high resolution images of the daguerreotypes. They could use photogrammetry to build 3D models or capture even higher quality images. From an academic standpoint, there is little more to be gained by physical possession of the daguerreotypes. And while the university is in a better position than most to maintain and conserve artifacts, this shouldn’t be the determining factor for ownership of the Zealy daguerreotypes.

Who should own images of slaves?

In October 2020, Judge Camille F. Sarrouf Jr. heard impassioned arguments in Massachusetts Superior Court to dismiss the case on legal technicalities. Judge Sarrouf has yet to render a ruling.

Judge: Photos of slaves belong to Harvard, not a descendant