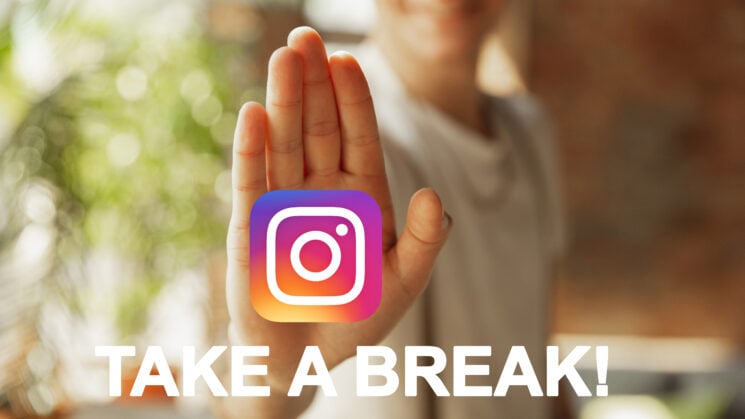 Last month, Instagram started testing a feature that would prompt teens to take a break from the app every once in a while. The test phase is now over, and “Take a Break”  has officially become a part of the app, and new features to improve teens’ safety are coming soon.

The new feature has been launched in the US, UK, Canada and Australia today, and it’s arriving to Instagram worldwide soon. As we’ve mentioned before, it’s all about prompting you to stop scrolling through Instagram and do something meaningful instead. You can choose the periods of time after which the prompts will appear: 10, 20, or 30 minutes. You can also turn them off, or ignore them and continue to use the app, which kinda makes the whole feature lose the point

Still, if you decide to keep the reminders and actually take breaks, Instagram will suggest what you can do instead: “take a few deep breaths,” “write down what you’re thinking,” “listen to your favorite song,” or “do something on your to-do list.”

We started testing a new feature called “Take a Break” this week. This opt-in control enables you to receive break reminders in-app after a duration of your choosing.

I’m excited to dig into the results & hopefully launch this sometime in December. ✌? pic.twitter.com/WdSTjL6ZdH

Instagram is also testing a feature that will become available to everyone in January. It allows teens and young adults to remove their activity on the app from when they were a lot younger. It will allow them to bulk delete the content they posted, along with all their likes and comments. I sure am glad I only had limited internet access when I was a teenager – otherwise there would be lots of bulk deleting to do.

Anyways, another feature is being tested, and it should be officially released in March. It’s a set of tools for parents and guardians that will give them an insight into how much time their kids are spending on Instagram. They’ll also be able to set the time limits if they think the kids should cut it down a bit. Another new feature will let teens notify their parents if they report someone. This way, the adults will know what’s going on (sort of) and if there’s need for a talk. Still, it’s just an option and it can be turned off, so, once again, it loses the point.

Instagram got under fire over the past few months after Facebook whistleblower Frances Hagen leaked some private and concerning information about the company, now Meta. According to Instagram’s own research, it ruins body image and mental health in teenagers. So, after this data has leaked, the company was quick to prove that they actually care about teenagers more than they do about the profit. Still, it’s kinda ironic that they’re prompting users to take a break while at the same time encouraging them to open multiple accounts. But I guess that’s a topic for another time.