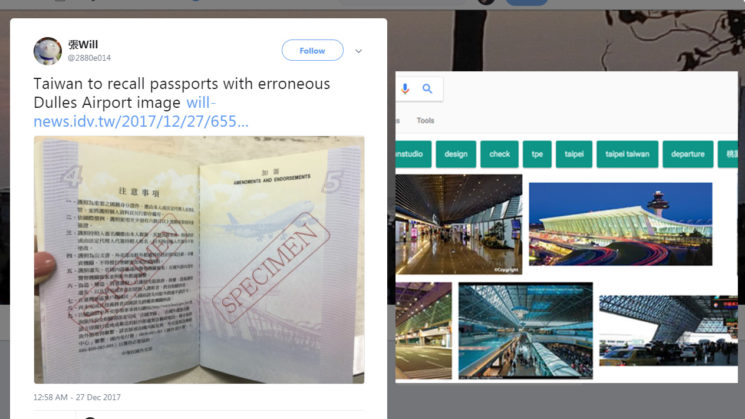 Well, this is a bit of an embarrassment. Taiwan’s new e-passports have been released, and then quickly recalled after a picture of Dulles Airport, near Washington D.C., was printed as the backdrop to one of its pages. Mashable believes that it may be the result of a Google Images search screw-up, which shows a photograph of Dulles Airport on a search for Taiwan Taoyuan International Airport.

The mix up was posted to twitter by 張Will, stating that the passports will be recalled. The passports have now been recalled. Focus Taiwan reports that around 200,000 of the new e-passports have been printed, but only 285 of them have been issued to the general public. So, that recall shouldn’t take too long.

Mashable shows that a search for “Taiwan Taoyuan International Airport” on Google images does indeed show quite a nice night shot of Dulles Airport quite high up in the results. This is thanks to a mislabelled image on the Matador Network. So, for a designer not familiar with the airport, it may be an easy mistake to make. But it just goes to show that you shouldn’t trust everything you see on the Internet. Despite the photo, Dulles doesn’t actually get a mention on Matador’s list.

Focus Taiwan reports that the new e-passports were to start being distributed on Christmas day. 285 slipped through before the mistake was noticed and they were immediately withdrawn. New passports should be ready to send out in about a month.

In the meantime, for those who still urgently need a Taiwan passport, the previous version is still available and will be sent in its place.

Are smartphones really to blame for declining camera sales? Or is it something else?

« Take a peek inside the Sony factory to see how they make the Alpha A9
Bring in the New Year with two supermoons, a blue moon, and a total lunar eclipse »