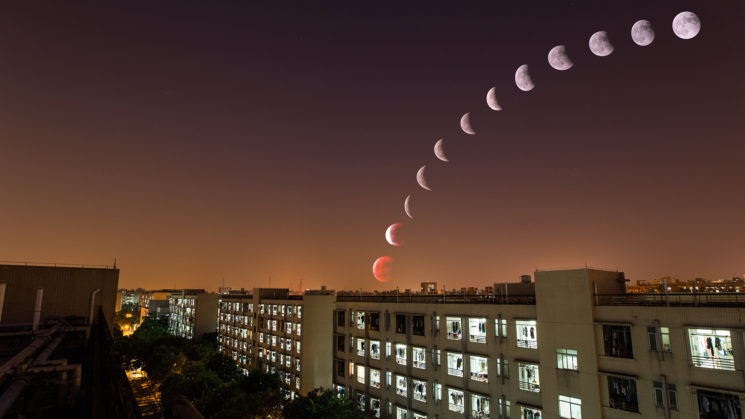 It seems that some of us will have a very special January if we look up to the skies this month. We’re expecting to have two supermoons, a blue moon and a total lunar eclipse. The eclipse is also coinciding with that second supermoon, so should be very cool. I say some of us, as the eclipse will only see totality from Eastern Asia and across the Pacific to the western USA & Canada.

NASA says that the two supermoons form part of a “trilogy”, the first of which happened last month. The next two are scheduled for January 1st (yup, tonight!) and January 31st. The second full moon at the end of the month, is called a “Blue moon”. This will be the second supermoon, that just happens to have a total lunar eclipse.

NASA also say that supermoons appear 14% bigger and 30% brighter than full moons that typically occur when the moon is at the farthest point in its orbit from the earth.

Suggested times for enjoying the either of the supermoons is right after moonrise and just before sunrise. This allows you to use a moderately fast shutter to prevent overexposing the moon while still having enough light to capture some of the Earth-based environment. This is also when the moon will appear to be at its biggest and brightest.

The moon will appear larger than normal for a few days after each supermoon, although it won’t be a full moon any more.

The January 31st eclipse is expected to begin at 11:48am UTC and reach its maximum at 1:30pm UTC. A handy map has been provided by Time and Date which shows exactly which regions will see the eclipse and when.

A total eclipse happens when the earth is in line in between the sun and the moon, causing it to cast a shadow on the moon’s surface. This makes the sun very red, as some light still gets through as it bends around the Earth’s atmosphere. These are sometimes called “blood moons”.

If you don’t get to see it for yourself, then I would expect to see some great shots to come out of Hawaii after the 31st.

« Taiwan e-passports include a picture of Dulles Airport, USA – Google Images may be to blame
Use strobes to freeze subject movement and action »