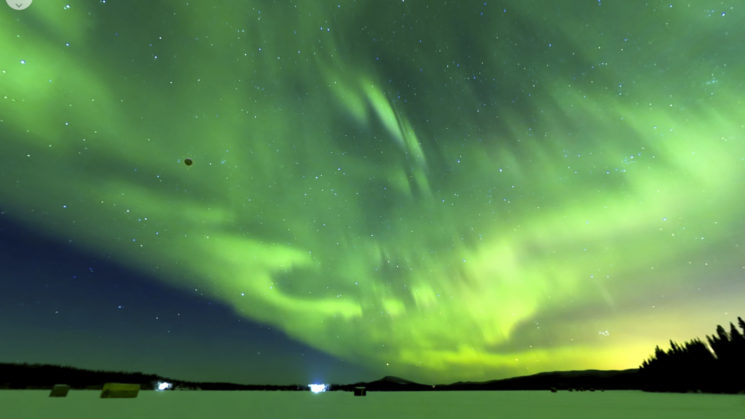 You guys remember that super blue moon eclipse a couple of months ago, right? Well, while many of us were sitting at home watching it on our computer screens, photographer William Briscoe was out in the Alaskan snow shooting 360° timelapse. And this 8K 360° video captures the beautiful the Aurora Borealis in the middle of it.

Shot on January 31st just near Fairbanks Alaska, William’s film has a fantastic view of the light show as the moon crosses the sky and temporarily disappears into blackness. If you have a VR goggles, or a headset to hold your phone, then just hit play, sit back and relax. It’s only just over a minute long, but it’s a gorgeous sight to see.

According to a comment by William, the sequence is a composite. The settings required to adequately expose the moon and the aurora are very different. So, two sequences were created and then combined. One rig exposed for the aurora and the landscape while the other captured the moon. He says that without doing it this way, even during a total eclipse, the moon would have been blown out.

William also mentions some of the challenges and solutions to his problems. At -31°F, it took a lot of effort to get his timelapse rig working properly. But with the help of external batteries, hand warmers, wrapping socks around the lenses, and a little hard work he managed to get it done.