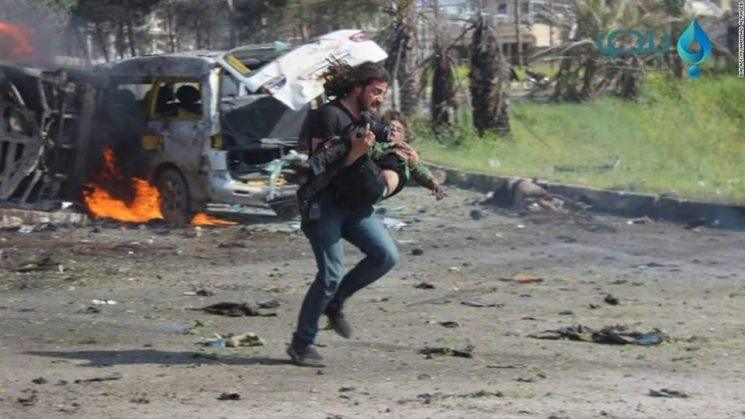 The job of a photojournalist is difficult and surrounded by danger. Still, we often argue about the ethics of photojournalism. The opinions vary whether they should be taking photos, or help those in need when things get tough.

Photographer and activist Abd Alkader Habak made his decision last weekend, when a bomb hit a convoy of buses carrying evacuees from besieged Syrian villages. 126 people were killed, and the blast briefly knocked out the photographer himself. But when he recovered consciousness, he didn’t take photos. He took action instead and helped the injured in the explosion.

Before you play the video, I must warn you that it’s extremely graphical, and most people would find it disturbing.

When the bomb hit the bus, Habak and his colleagues agreed to put the cameras aside and start helping the injured. As Habak was checking on the people, he ran towards a child which turned out to be dead. Then he moved on to another one, for whom others told him was dead as well. However, the boy was still breathing.

The photographer grabbed him in his arms, rushing towards an ambulance. Photographer recalls that the boy, only six or seven years old, was holding his hand and looking at him. He left the child in the ambulance, and he doesn’t know what happened further, if the boy survived or not. After this, he ran back and went on helping the others, until he collapsed, overcome by grief.

Another photographer, Muhammad Alrageb, captured the photo of Habak rushing towards the ambulance with the boy and the camera in his arms. He had also been helping the injured, but eventually decided to take the photos, as he wanted to “make sure there was accountability.” It’s him who took the above photo of Habak running with the wounded boy.

I was deeply moved by the action of Abd Alkader Habak, who did what I hope most humans would do – tried to help the ones in need. It hurts just to watch this and to witness the terrible world we live in. He was driven by instincts and compassion and wasn’t thinking about anything else but helping.

On the other hand, photos and footage could help us understand, change opinions, and hopefully take action to help others. They show us the reality and what’s going on around us. Therefore, I can’t judge Muhammad Alrageb for starting to take photos at some point. It’s his job, and what he captured is an evidence of the reality and the present we live in. It’s a contribution to the history records, if nothing else.

I believe both photographers did what needed to be done, but they were driven by different thoughts and instincts. Needless to say, I wish this madness would stop and nobody ever would need to record horrible events like this. I’m pretty sure I would drop everything and rush to help. But I’m not a photojournalist and I don’t have their mindset, just my instincts. What do you think? Could you imagine what you would do? Stay “professional,” or immediately ditch the camera and offer help?