It’s amazing how far sensor technology’s come in the last few years. We’ve had dual pixel autofocus, ultra high ISOs, and a whole bunch of other cool features show up. Phones and bigger camera sensors get more and more powerful with each new generation. This sensor from Sony, though, might be one of the most exciting yet.

Sony have developed a way to speed up the data acquisition in a CMOS sensor. It doesn’t quite make it a global shutter, but it speeds things up enough to be almost as good, but at a much lower cost. The acquisition becomes so fast, it’ll even record full HD 1080p video at up to 1,000 frames per second. The technology seems destined for smartphones at the moment, but I would bet it won’t be too long before it scales up.

The trick is a newly developed 3 layer stacked CMOS image sensor which features Dynamic RAM (DRAM). This makes little sense until you understand just how quickly DRAM can read and store data. Typically, in a regular 2 layer stacked CMOS sensor, data goes straight from the sensor to the circuit, and then out to all the rest of the electronics and the processor.

This is the bottleneck, the circuit. As CMOS sensors scan the scene line by line, it has to wait until the current line is cleared before it can send through the next. In this instance, the image is sent from the sensor to the DRAM, which can read it much more quickly, before it’s passed along to this “slow” circuit. Essentially, it’s acting as a super fast buffer between the two.

The advantages of this mean that it’s essentially fast enough that it might as well be a global shutter. It might still not be quite fast enough to freeze propellers, though. But what it should do is eliminate leaning buildings and other rolling shutter artifacts from your handheld footage and pans.

Specifically with this sensor, it means that it can capture data four times as fast as a traditional 2 layer CMOS. Where a regular sensor might require 1/30th of a second to capture the 19.3MP scene, this does it at 1/120th.

Being able to acquire this data this quickly also means it can capture super fast framerates, too. Up to 1,000fps, even at full 1080p HD. 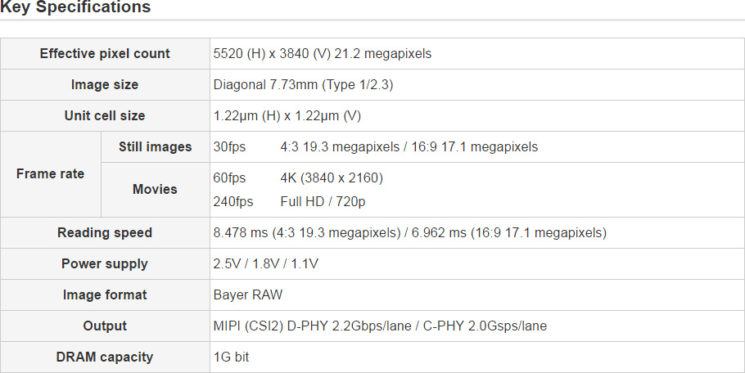 Sony haven’t said exactly when this new sensor may appear. It wouldn’t be too far fetched to expect it in a new Xperia in the near future, though. When it’ll start stepping up to APS-C and full frame sensors is anybody’s guess. I’ll bet those Sony mirrorless video shooters are getting a little excited at the idea, though.

You can find out more about the tech details over on Sony’s website.

« The best case for the DJI Mavic Pro is actually made by GoPro
A possible replacement for Nikon D810: Nikon D820 with 46MP »